UCT leaps up in international rankings

The University of Cape Town (UCT) climbed 23 places and retained its top spot on the continent in this year’s World University Rankings published by Times Higher Education (THE) on Wednesday, 12 October 2022.

The university now sits at 160th globally, up from 183rd place last year.

“We are deeply proud of our academics and the wider UCT community for the hard and excellent work they do that has led to this result,” said UCT Vice-Chancellor Professor Mamokgethi Phakeng. “UCT competes globally with institutions that have considerably more resources than we do, which makes this result all the more remarkable.”

She added: “As a university in the Global South, we are particularly pleased to retain our standing internationally while at the same time prioritising and serving the critical needs of the Global South and the people living here – priorities which are not usually recognised in global rankings.”

“We are deeply proud of our academics and the wider UCT community.”

UCT’s strongest performance was in citations – or research influence – which measures the number of times a piece of research is cited. Here, the university ranked 172nd globally.

In the area of research – its volume, income and reputation – UCT also ranked in the top 200 globally. The university’s performance improved for two indicators: the research reputation survey and the ratio of papers to academic staff. The former demonstrates UCT’s growing positive reputation among leading international academics.

Despite a drop in the position of the other two categories – industry income and international outlook (international staff, students and research collaborations) – UCT’s score for co-authorship improved slightly, evidence that UCT’s collaboration with international partners continues to grow.

“It is gratifying to see UCT’s reputation in both research and in teaching and learning grow, recognition of the important role African institutions are playing in the global knowledge project as institutions the world over address the grand challenges,” said Professor Phakeng.

UCT is also Africa’s top university in the US News & World Report Best Global Universities Rankings, the most recent of which was issued in 2021. A new release is expected later this month.

Read more about the THE World University Rankings 2023 methodology. 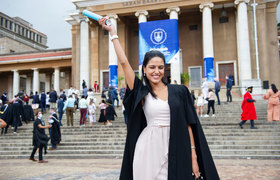