After suffering devastating losses in the fire that swept across the University of Cape Town’s (UCT) upper campus last year, the Department of Biological Sciences has received a donation of €1 million (approximately R17 million) from the Hasso Plattner Foundation to assist with its recovery efforts.

Vice-Chancellor Professor Mamokgethi Phakeng paid the department a visit during lunchtime on Wednesday, 24 August, to share the good news in person.

Professor Phakeng explained that when the Hasso Plattner Foundation committed to donating €500 000 to the department, Dr Kristina Plattner – a permanent member of the Foundation Council and a UCT alumnus – matched the amount with an additional €500 000 from her personal fund, making up the €1 million.

“We are very grateful to the Hasso Plattner Foundation as well as Kristina Plattner for the investment,” Phakeng said. “This is a vote of confidence in the department.”

The donation came as a pleasant surprise to the head of the department, Professor Tony Verboom, and his colleagues, who had compiled and submitted the proposal for funding in July 2021.

“Seeing the damage the fire caused to the university last year was devastating,” said Dr Plattner. “As an alumnus myself, UCT is very close to my heart; especially the Biological [Sciences] department as I did my undergrad there.”

“The Biological Sciences department was quite badly affected by the fire on campus last year,” explained Professor Verboom. “We’ve experienced a groundswell of sympathy from the outside with various generous donations.”

Starting in the vicinity of Rhodes Memorial on the morning of 18 April 2021, the fire rapidly spread towards UCT’s upper campus. Airborne embers ignited various strands of vegetation, including a large palm tree neighbouring the HW Pearson building, which houses parts of the Department of Biological Sciences.

“The fire on campus made us realise how important it is to get all our specimens digitised, imaged and databased.”

According to an article posted on the department’s website, eight offices, the common room and the computer lab were gutted by the fire. Worst of all, however, was the destruction of irreplaceable historical photographic collections and other unique long-term data sets.

Putting the magnitude of this kind of loss in context, Verboom used the example of the partial destruction of the Berlin Herbarium during the Second World War. To this day, there is still uncertainty about which plants certain names refer to, since their anchor samples were destroyed during the Bombing of Berlin.

“The fire on campus made us realise how important it is to get all our specimens digitised, imaged and databased,” he said.

The digitisation of the department’s herbarium and various other collections is also aligned with what the Hasso Plattner Foundation hopes will be achieved with their donation.

“We hope that our donation will [be] put towards securing the collection by digitisation and creation of a virtual herbarium, as well as towards the restoration/upgrading of the physical infrastructure,” said Plattner. “It would mean a lot to the foundation if the funds help the [Department of Biological Sciences] move forward with their scientific research in the unique Cape Floral Kingdom as well as their teaching work.”

“The fire was devastating, but the rebuilding and recovery process is energising when you have supporters like the Hasso Plattner Foundation and alumni like Kristina.”

Other projects on the department’s restoration and rebuilding wish list include giving the building an eco-friendly makeover; making bursaries available for studies focusing on fire ecology and climate change; improving plant propagation facilities to make them more compatible with climate change; upgrading the department’s Bainskloof field station; and creating a living laboratory on the edge of campus that could be used to promote urban edge studies and fynbos restoration.

“So, now we as a department … need to sit down and decide what our priorities are,” said Verboom.

Adding to this, Phakeng said: “The fire was devastating, but the rebuilding and recovery process is energising when you have supporters like the Hasso Plattner Foundation and alumni like Kristina.”

Supporting conservation, as well as science and education, lies at the heart of the foundation’s work.

“The foundation believes that scientific research in conservation and its implementation are crucial to find solutions to the current climate crisis and for the future of our planet,” said Plattner.

While fundraising is one of the responsibilities outlined in the vice-chancellor’s job description, Phakeng emphasised the fact that it’s never a one-person job.

“We as fundraisers of the university can never do this alone. The proposal that brought this to be was created through teamwork,” she said.  “We are here because we’ve got scholars who are passionate about what they do, and they work with us to win necessary resources for the university.”

The Hasso Plattner Foundation has been a staunch supporter of UCT for a long time and are also the primary funders of UCT’s d-school. 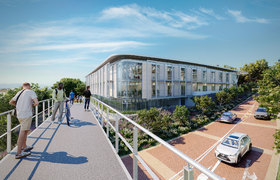 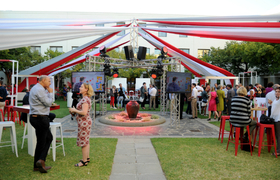