Women’s Month: Monique Schoeman – a servant of the downtrodden

“What counts in life is not the mere fact that we have lived. It is what difference we have made to the lives of others that will determine the significance of the life we lead.” – Nelson Mandela

It’s with these words in mind that Monique Schoeman, the head of the Refugee Status Determination Clinic at the Refugee Rights Unit (RRU), steps into her office at the Kramer Law Building on the University of Cape Town’s (UCT) middle campus every day. Through litigation and advocacy, she has committed to achieving social justice and making a difference in the lives of refugees and asylum seekers in South Africa.

The Refugee Status Determination Clinic assists asylum seekers and refugees through the daunting status determination process. Its work focuses specifically on those processes that affect a refugee or asylum seeker’s legal status in the country once an asylum application has been made.

Since joining the RRU more than a decade ago, Schoeman has been a voice for the downtrodden. In celebration of Women’s Month, UCT News recognises her significant contribution to this marginalised sector of society, and her tireless efforts to ensure their right to dignity.

Refugees and asylum seekers in South Africa face unmatched challenges. This as they attempt to rebuild their lives outside of their countries of birth, often thousands of kilometres from their family and friends and a solid support structure.

“Things we take for granted like simply getting our children into a school or walking into a healthcare facility and receiving attention is heaven sent for refugees and asylum seekers.”

Schoeman’s work at the Refugee Status Determination Clinic is at the forefront of assisting refugees and asylum seekers to rebuild their lives. She plays an active role in helping them to access the correct documentation, as well as registering children with temporary asylum permits in schools. In addition, recording the birth of new-born babies, and helping refugees and asylum seekers access other basic services like healthcare and education, also forms part of her work.

“Things we take for granted like simply getting our children into a school or walking into a healthcare facility and receiving attention is heaven sent for refugees and asylum seekers. It’s heartbreaking that they are not afforded the same treatment as ordinary South Africans both in life and in death,” she said.

For Schoeman, the deaths of undocumented asylum seekers during the early days of the COVID-19 pandemic proved to be one of the most harrowing experiences of her career to date. One case in particular stands out. In March 2020, three weeks into Level 5 lockdown, Schoeman said two Muslim foreign nationals were murdered in Gugulethu. One of the victims, a Somali national, was undocumented and therefore his body could not be released from the Salt River Mortuary for burial.

When Schoeman got word of this situation, she jumped in to help. She said she started telephonic conversations with the South African Police Services’ (SAPS) investigating officer in Gugulethu, and the United Nations High Commission for Refugees (UNHCR) office in Kenya. The UNHCR facilitated conversations with the family to obtain the relevant documentation and permission to get the deceased’s body released, and Schoeman facilitated the negotiation process with authorities in Cape Town. Weeks of negotiations with the departments of Health and Home Affairs, which included a letter of demand from the RRU, led nowhere. Schoeman said as a last resort, she filed an urgent application before the Western Cape High Court under the Birth and Death Registration Act and the National Health Act in an effort to get the matter resolved.

“We challenged text in both acts that failed to adhere to the principles of the Constitution. We argued that certain provisions in the acts were invalid because it failed to allow relatives or friends to identify a deceased if the deceased’s identity document or passport was not available,” she said.

The Western Cape High Court heard the matter within two days of receiving the application and the court ruled that the body be released.

“I kept thinking of the deceased and wanted to do all I could to ensure that he received a burial with dignity.”

“This was such a harrowing experience, and I was completely out of my comfort zone. I needed to obtain a permit to work during hard lockdown, get permission from the vice-chancellor to access campus and everything was a rush,” Schoeman said. “But I kept thinking of the deceased and wanted to do all I could to ensure that he received a burial with dignity. Thankfully we got there eventually.”

Following the court order, the Department of Home Affairs extended the permit length for refugees and asylum seekers. By then, many permits had expired during lockdown and the department also operated on limited capacity. Schoeman said thanks to the good working relationship she managed to build with the Salt River Mortuary, several undocumented deceased bodies were handed over to relatives and friends for burial.

While some days are tougher than others, for Schoeman, going to work every day to assist refugees and asylum seekers build better lives for themselves or to ensure dignity in death, is a true blessing and what brings meaning to each day. It’s also especially gratifying and rewarding when the RRU manages to give clients hope after a long haul, and when their feelings of despair are replaced with optimism and courage.

“Listening to clients tell different stories about their reasons for choosing to flee their countries of birth to seek refuge in South Africa is heart wrenching. It’s unbelievable how much they constantly need to endure. And it’s for this reason that I’m filled with a great deal of gratitude each time I’m able to make a difference in their lives,” Schoeman said.

She said South Africa still has a long way to go to ensure that refugees and asylum seekers feel welcome in the country. Streamlining processes within the Department of Home Affairs and developing anti-xenophobia strategies and campaigns are just two pieces of a large puzzle that require urgent attention.

“As South Africans we have a duty to welcome them with open arms, and part of that is putting processes in place to prioritise them.”

“Refugees and asylum seekers are welcome in South Africa; it’s enshrined in our Constitution. As South Africans we have a duty to welcome them with open arms, and part of that is putting processes in place to prioritise them. I’m privileged to be part of a unit that advocates for all of this,” Schoeman said. 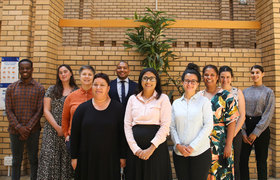 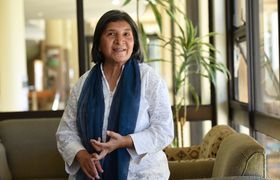