The University of Cape Town’s (UCT) School of Education (SoE) has been awarded four Green Stars by the Green Building Council South Africa (GBCSA) due to its environmentally friendly design that will also provide users with a healthy and comfortable space to study, work and play.

The GBCSA’s Green Star SA rating tool evaluates buildings in terms of a number of categories, which include:

The main idea behind a green building is to have as little impact as possible on the surrounding ecological landscape and environment, reducing its carbon and water footprint, while providing users with a healthy and comfortable space in which to work and study.

“The spaces where we live, work, learn and play have a fundamental impact on our personal health and behaviours. Just as we have an impact on the environment, so our environment has an impact on us,” said GBCSA chief executive, Lisa Reynolds.

“We commend UCT for carefully considering all of these impacts holistically through their Green Star rating and striving for excellence in the built environment.”

“We commend UCT for carefully considering all of these impacts holistically through their Green Star rating and striving for excellence in the built environment. A Green Star-rated building as part of a university campus is a demonstration of theoretical knowledge in action – a live education tool.”

The SoE building project has performed well in the Green Star categories in a number of ways, a few of which are highlighted below.

Working with the environment

Located just below the cricket oval on lower campus, the SoE building is in a sensitive ecological area.

Because of this, during the early planning stages of the project, specialist environmental consultants were brought in to draw up an environmental management plan to accommodate a number of well-established trees as well as a relatively rare and protected frog species that had been identified in the area.

“These sensitivities had to be considered carefully, which resulted in the building being designed to undulate among the trees as far as possible,” said Manfred Braune, the director of Environmental Sustainability at UCT. “Environmental management was also employed to not disturb the best habitat for the frogs. Any construction would have to be halted were one of the frogs to be found before the site was established.”

Since not every tree could be avoided in the design of the building, plans were put in place to move certain trees to other parts of campus. Most trees have, however, been retained, so the new SoE building is surrounded by a small forest.

“We’ve taken a very conscious approach of retaining the existing landscape where possible and planting to match that landscape,” said Francois Retief from Sow and Reap, who is the green building consultant for the SoE project. “In a way that eliminates the need for irrigation in the future.” 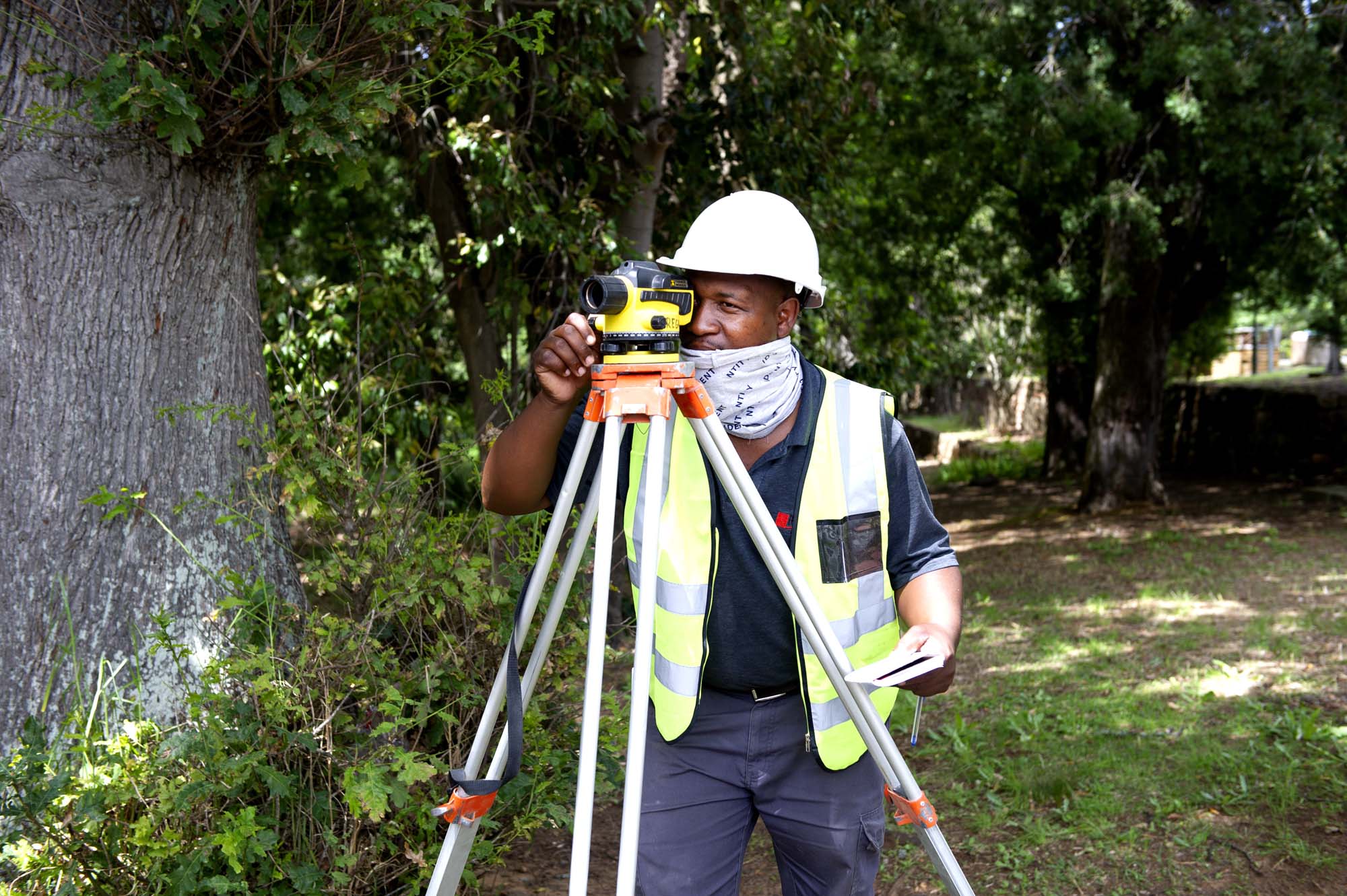 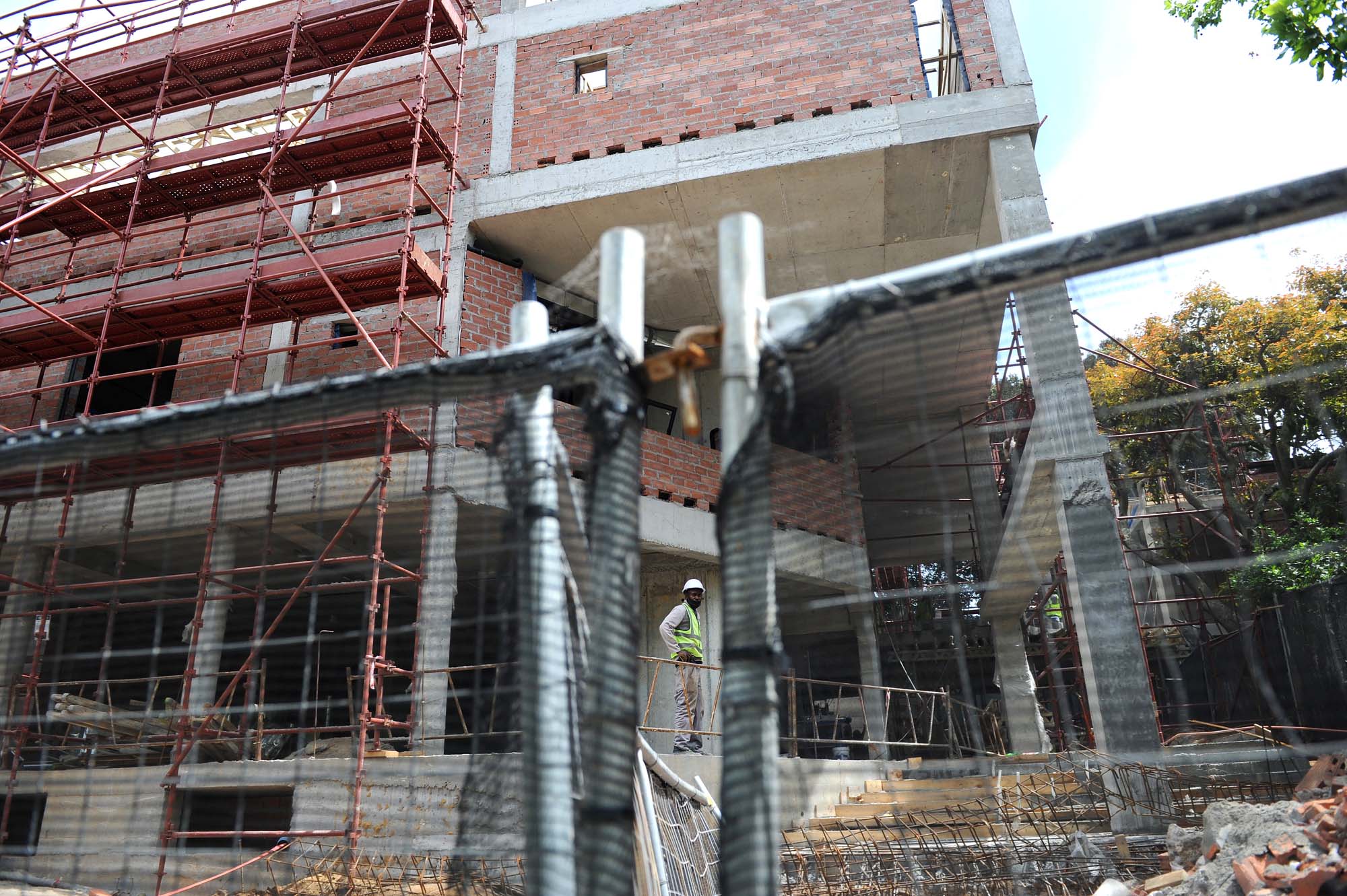 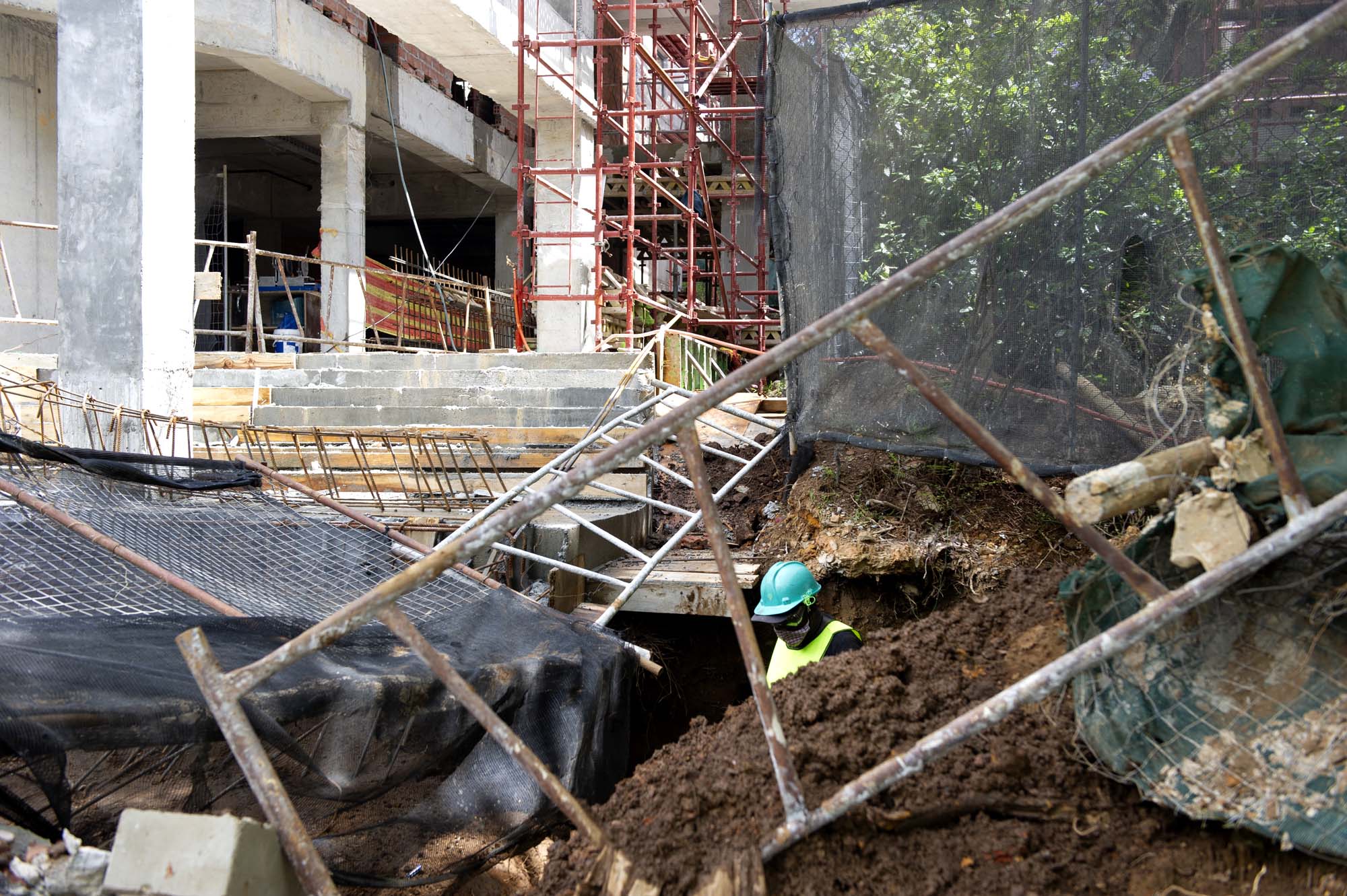 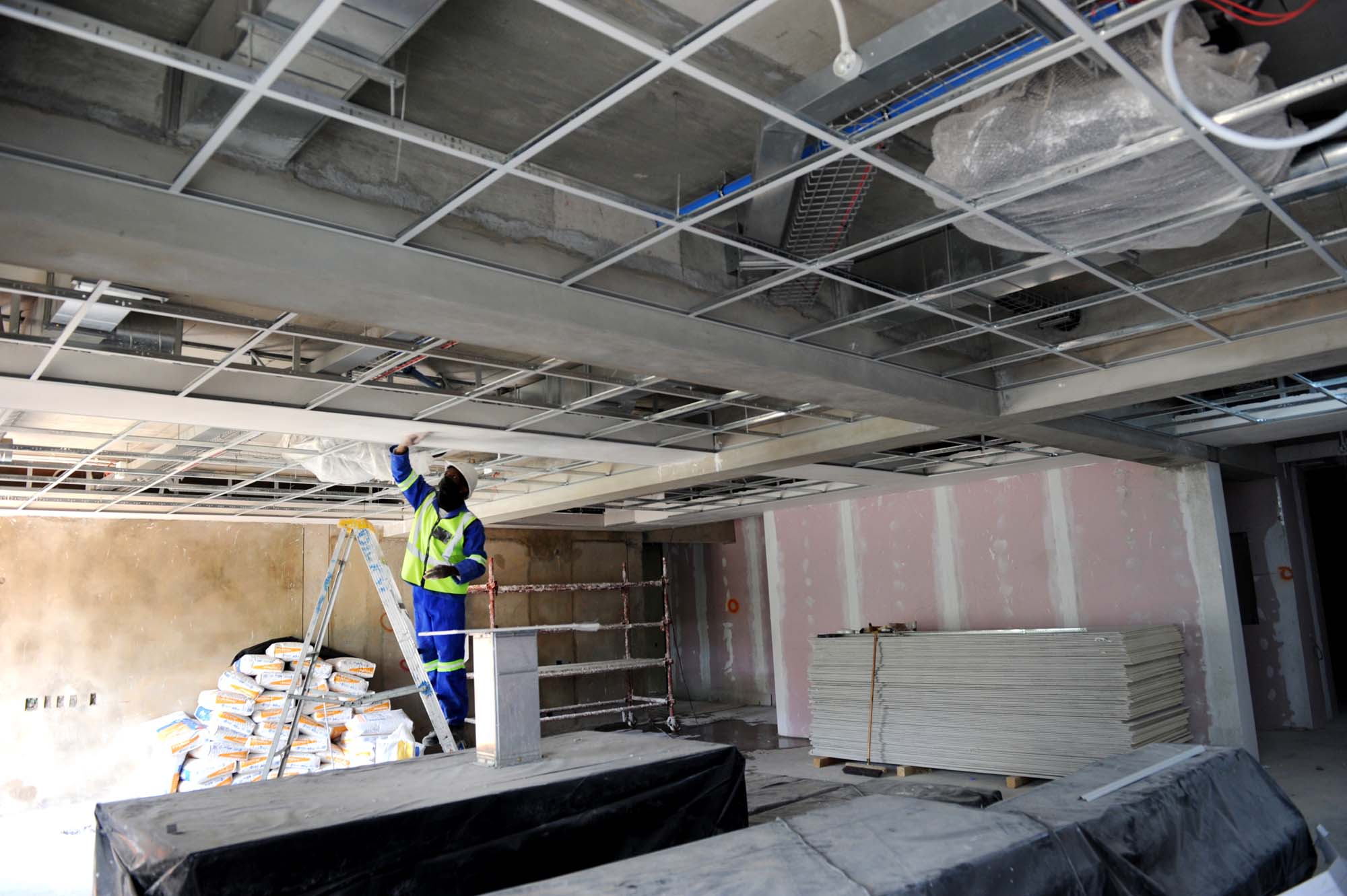 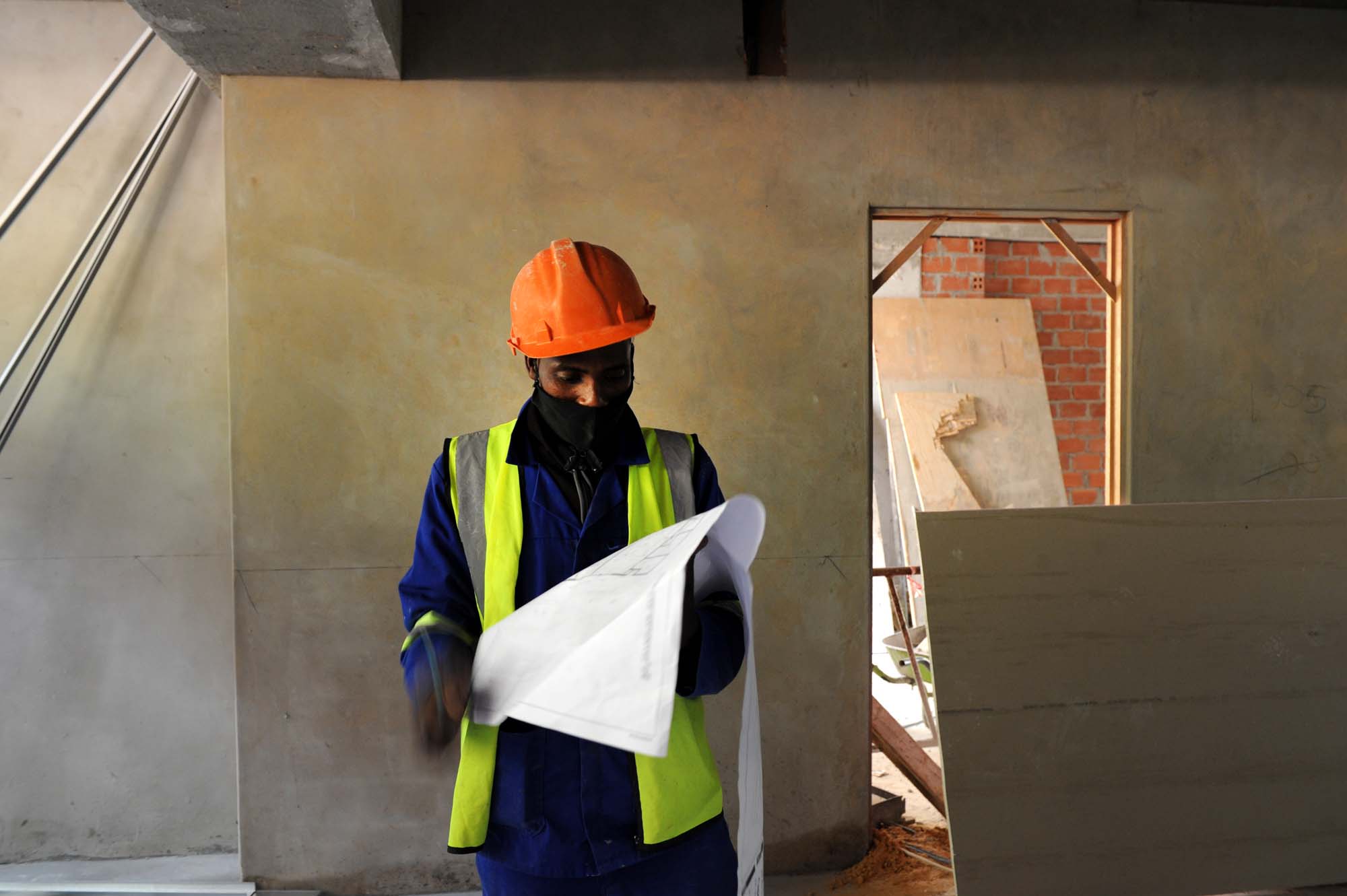 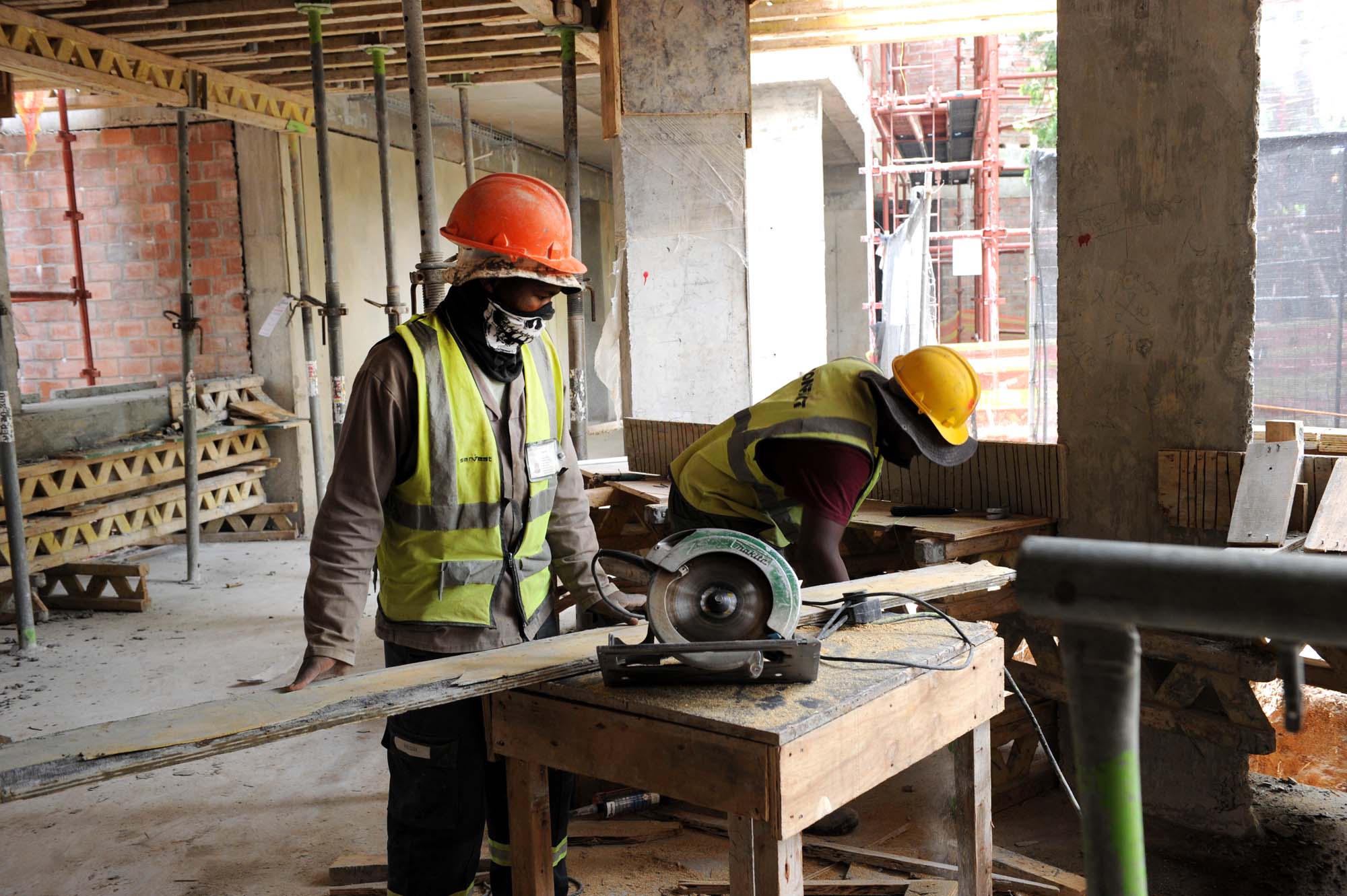 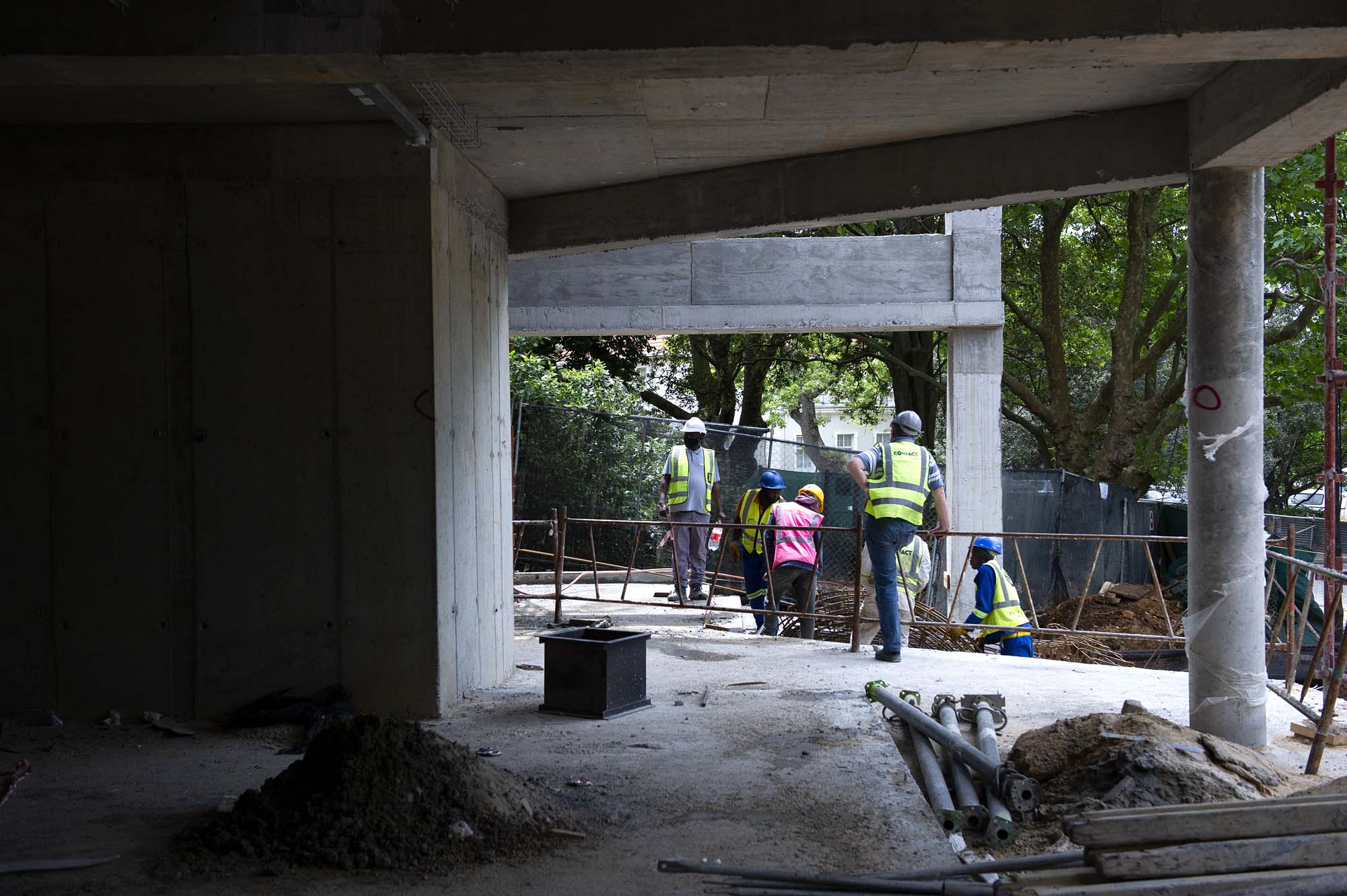 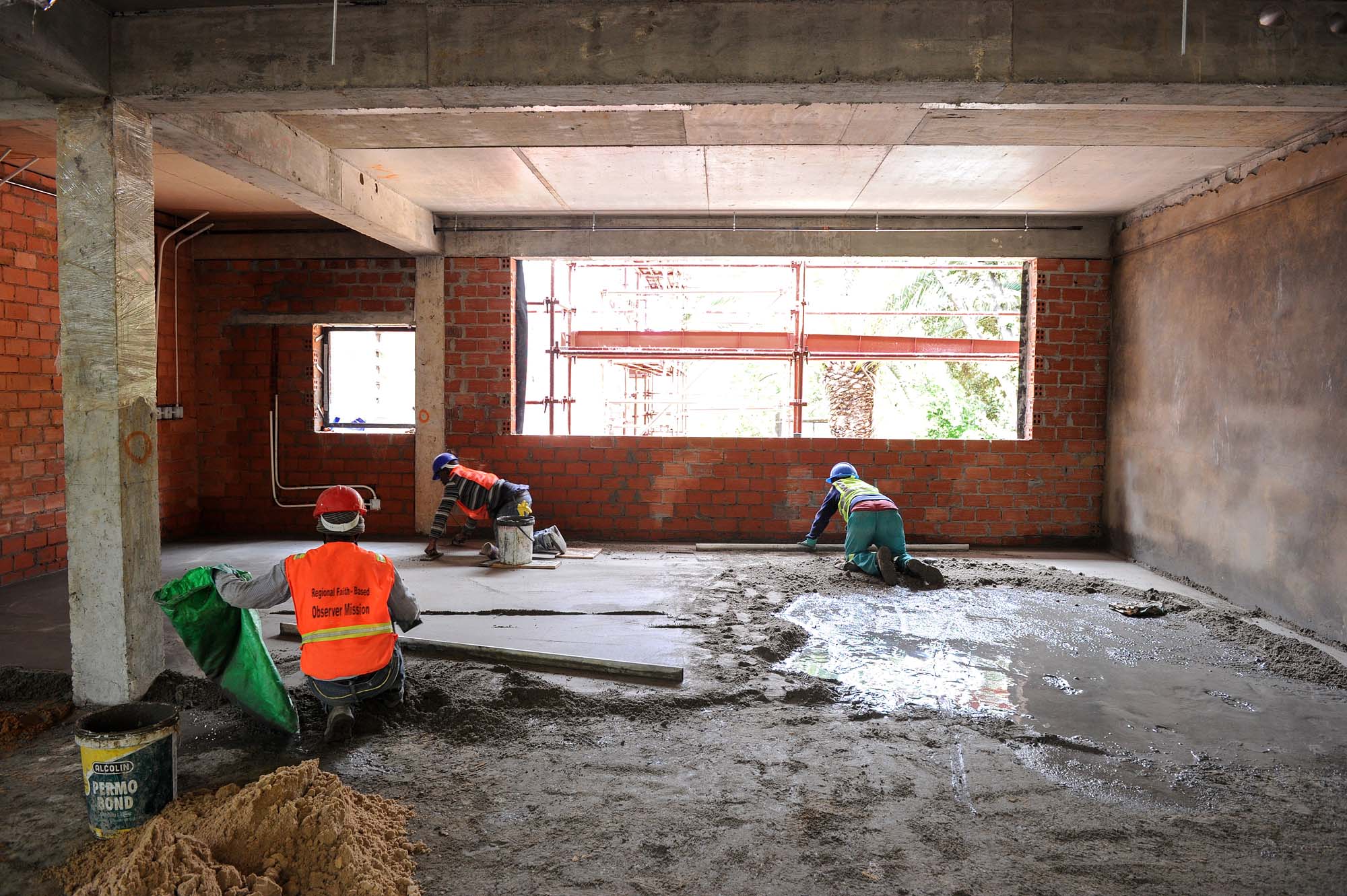 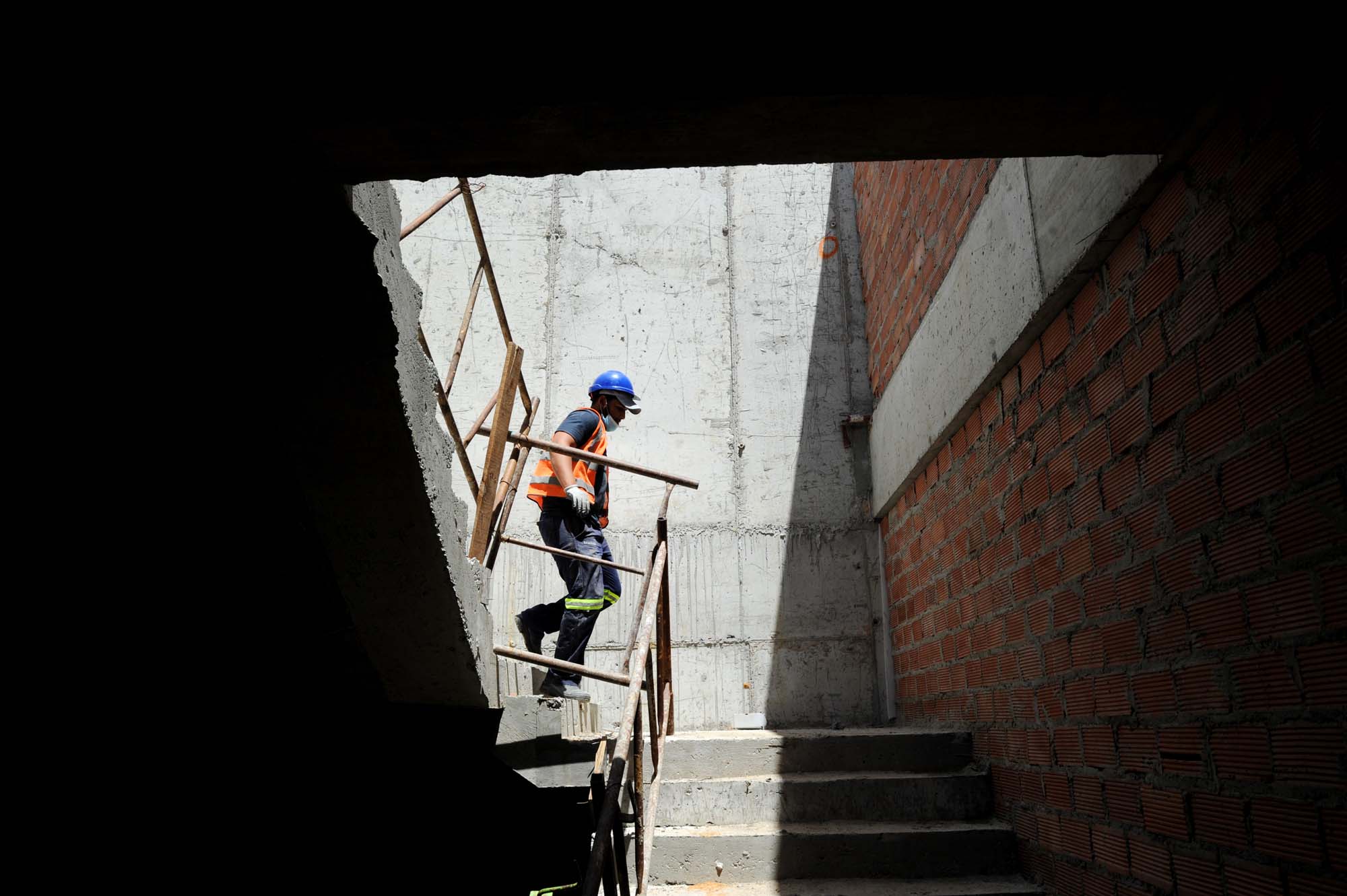 The School of Education building under construction.

Retief explained that while some watering may be necessary during the first few months, once fully established, the locally appropriate plants used on site should no longer require regular irrigation.

Adding to this, architect Kevin Porter from Jacobs Parker said that instead of directing all rainfall into the storm-water system, the building’s gutters and downpipes have been designed to transport it back into the surrounding landscape to replenish the cut-off supply of groundwater which previously fed the trees on the lower end of the site.

This water-wise approach continues inside the building where the most efficient and practical fixtures have been chosen for toilets and taps.

“Water submeters are also in place so you can get data if you need it on where water is being used as well as to detect leaks,” said Braune.

The SoE’s targeted water consumption is 550 kl per year. This is an improvement of more than 80% on typical sites of this type and largely due to the fact that landscaping has been specifically designed to avoid irrigation with potable water.

It is estimated that this will result in an annual saving of R92 000 and the equivalent of one Olympic-sized swimming pool’s water.

In terms of energy consumption, the building is targeting 100 kWh/m2/year, which is an improvement of almost 40% on typical buildings of this type, which will equate to approximately R315 000 saving per annum compared to standard design.

Among other interventions, this will be achieved through harnessing daylight and making use of natural ventilation.

“For the offices, we’ve got tempered fresh air, which makes those spaces a little more comfortable, but still energy-efficient,” said Retief.

“By creating awareness of energy consumption, it is more likely that the building can remain an energy-efficient building where everyone does their part.”

Ample windows also ensure an abundance of natural light in offices, which will discourage use of artificial lighting. Glare will be mitigated through blinds and shading.

One of the essential design elements for the office spaces has been converting one of the four windows into a solid insulated panel that can also be opened.

Although lecture theatres will still be equipped with heating and cooling systems, occupancy sensors will ensure they are deactivated once the rooms are empty.

Furthermore, airborne toxins have been reduced dramatically by making use of carpets and water-based paints that do not release the types of volatile organic compounds often associated with the smell of a new building or vehicle.

Despite misconceptions around the costs of green buildings, the SoE project has cost only marginally more than a regular building would have.

“There are quite a lot of misconceptions in the industry that constructing a certified green building costs a lot more – even up to 30% more – than regular buildings,” said Braune. “On this project, however, it ended up being only about 1.5% more expensive than a non-green building, which shows how achievable a Green Star rating actually is.”

While attaining a Green Star certification is a major feat, the real challenge lies in sustaining it. Once the building is in use, UCT will monitor energy and water consumption, with these statistics being displayed on a big screen in the foyer.

“By creating awareness of energy consumption, it is more likely that the building can remain an energy-efficient building where everyone does their part,” said Porter.