Climate-change movers set to jet to Milan for youth summit

A group of young people, including two University of Cape Town (UCT) students, is heading to Milan to make waves and stir pertinent conversation at a youth summit as global leaders prepare for the United Nations (UN) Climate Change Conference (COP26) in Glasgow later this year.

Each delegate is already an achiever or emerging activist in the areas of climate change and the environment. MPhil candidate Koaile Monaheng and BSc student Sibusiso Mazomba, both of UCT, along with Sandisile Mkhonza of the University of the Witwatersand, are on their way to Milan in northern Italy for the Youth4Climate: Driving Ambition event, which takes place from 28 to 30 September 2021.

Billed as “an unprecedented opportunity to put forward ideas and concrete proposals on some of the most pressing issues on the climate agenda”, the event will have the trio interacting with government ministers from around the world on climate issues. As a curtain‑raiser, Youth4Climate takes place back‑to‑back with Pre-COP Milan, the preparatory meeting for this year’s COP26 in Scotland in November.

Mazomba (19), who is a second‑year student in the Department of Biological Sciences, explained that the organisers put out a call for applications from young people who have been lobbying and working to combat climate change in their local and regional contexts.

“Over 8 700 applications were received and 400 [international delegates] were selected. [Youth4Climate] aims to bring together young people from around the world to discuss and exchange views on some key political aspects of the negotiations and delve into some key negotiating topics that will be addressed at COP26,” said Mazomba.

“We need to ‘move different’ than those who came before us.”

Monaheng (27), who is from Lesotho, added that the call to participate and contribute to global climate governance came from the Office of the UN Secretary General’s Envoy on Youth, the Youth Constituency of the United Nations Framework Convention on Climate Change (YOUNGO) and the British government (COP26 hosts).

“I hope to learn, contribute, and build strong sustainable African, as well global networks, with other youth climate-change activists who embody intergenerational solidarity in knowledge sharing and the establishment of collaborative networks that extend well beyond Milan or Glasgow.

“We are working towards COP27, which should be on African soil. We need to ‘move different’ than those who came before us,” said Monaheng, a Mandela‑Rhodes Foundation scholar and a consultant for the YOUNGO Open Dialogues on Climate Change for Lesotho.

Shaped by their roots

“My personal journey that has led me to this point is rooted in the highly politicised [story] behind Lesotho’s water history,” said Monaheng.

“It has been projected that the next wars will be fought over natural resources like water. Contrary to popular belief, for Basotho, this war has already happened and the marginalised are left salvaging pieces of debris decades later.

“Therefore, for me, a student with a foundation rooted in political and international relations, climate change and sustainable development presents a natural choice in embodying a strategic repertoire advocating for environmental justice that recognises the intergenerational, cross‑disciplinary climate action needed on the African continent,” he added.

“We are one the most unequal countries in the world and climate change threatens to exacerbate the socio‑economic issues we are experiencing.”

Mazomba, who hails from Soweto and attended school in the suburbs in Johannesburg, has seen first‑hand “the sheer objectionable inequality that lives and breathes in our society”.

“We are one the most unequal countries in the world and climate change threatens to exacerbate the socio‑economic issues we are experiencing.

“My aim is to bring voices of grassroots and marginalised communities to the decision‑making table at COP. Marginalised communities such as young people and women in the global south will bear the brunt of the impacts of climate change if we do not act with greater urgency, fostered by inclusive and intersectional climate discourse,” said Mazomba.

Mkhonza, who is completing an honours dissertation on green bonds in the African market, said, “I would like to advance my work on climate finance and engage with like‑minded finance professionals working on climate finance.”

The trio were hosted on 14 September2021 by the Embassy of Italy and the British High Commission at the Italian ambassador’s residence in Pretoria, in preparation for their departure to Milan.

“We were afforded the platform to share our insights, expectations on the conference and visions for an active fight against climate change. There was an insightful panel discussion with South African and international stakeholders,” said Monaheng.

“It was aimed at allowing us to [comment] on the state of climate action in the country and [on] our expectations for the Pre-COP event later this month,” said Mazomba.

“I would also like to see perspectives of countries from the Global South being included in global climate-change policies and for more representation of young people from the global south in conferences like COP.”

Expressing a similar sentiment, Monaheng said, “I would like my current political leadership in my own context, and in Africa more broadly, to open up the space to young voices without being insecure about their jobs. Climate-change justice is intra‑generational, with many of the predicted future scenarios ‘already here’, in our own countries. Politics is secondary to survival.” 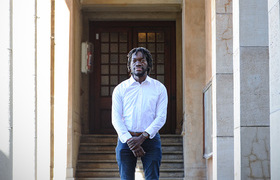