The University of Cape Town (UCT) has been ranked in the 201–300 band by ShanghaiRanking’s Academic Ranking of World Universities (ARWU) 2021, published on 15 August 2021. This places UCT first in the country and on the continent.

“UCT shines as a place of excellence among the world’s universities,” said UCT Vice-Chancellor Professor Mamokgethi Phakeng. “We are grateful and proud to be in such a strong position; one we are working to harness for potential impact on the continent and beyond.”

“By placing transformation and sustainability at the core of our vision for the future, we are working to pursue these in parallel with excellence.”

The ARWU ranks more than 1 800 universities across six key indicators and publishes the best 1 000.

“Although it is not usually accounted for in international university rankings, like this one, UCT strongly values its positive impact on society. And by placing transformation and sustainability at the core of our vision for the future, we are working to pursue these in parallel with excellence.”

This year, UCT regained the top score in the country in the ARWU highly cited researchers indicator, which contributes 20% of the total weighting, with three UCT researchers included in the list: Emeritus Professor William Bond, Professor Vicki Lambert and Professor Dan Stein.

The list of Highly Cited Researchers, released annually by Clarivate Analytics, identifies researchers who have demonstrated significant influence through publication of multiple highly cited papers on the Web of Science during the past decade.

In addition to the highly cited researchers indicator, there are five other indicators used by ARWU: the number of alumni winning Nobel Prizes and Fields Medals (10%), the number of staff winning Nobel Prizes and Fields Medals (20%), papers published in Nature and Science (20%), papers indexed in major citation indices (20%), and the per capita academic performance of an institution (10%).

In May 2021, ShanghaiRanking placed UCT among the top 100 universities for five subject areas in its Global Ranking of Academic Subjects 2021.

UCT performed best in environmental science and engineering, placing 23rd in the world. This significant jump up from the previous year is as a result of a prestigious award in this research field that was conferred on a retired UCT staff member.

Another UCT subject ranked in the top 50 was oceanography, which maintained 48th position.

UCT’s mining and mineral engineering, and public health were both ranked between 51 and 75, and clinical medicine placed in the 76 to 100 range.

For its subject rankings, ShanghaiRanking lists more than 1 800 universities across 93 countries in 54 subjects. UCT was ranked in 21 of these.

Read about the ARWU methodology. 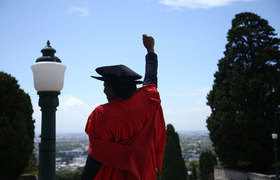