The University of Cape Town (UCT) ranks 10th worldwide among universities in countries with emerging economies according to the 2021 Times Higher Education (THE) Emerging Economies University Rankings. UCT maintained its position from 2020 and remains the top performing institution from Africa.

“We can also be proud of our performance as a country: South Africa has once again shown the strength of its higher education sector, and this is even more remarkable given its relatively modest funding from government.”

South Africa has six institutions in the top 100 for the first time this year.

The latest emerging economy rankings, which include institutions in 48 countries or regions classified by the London Stock Exchange’s FTSE Group as “advanced emerging”, “secondary emerging” or “frontier”, show that emerging universities are improving faster than those around the rest of the world.

“We are looking forward to seeing how universities from emerging economies position themselves in the upcoming year.”

A record number of universities qualified for this year’s rankings – 606, an increase of 14% compared with 2020 (533). And for the first time, institutions in a single country – China – took all five top spots (in order): Tsinghua University, Peking University, Zhejiang University, Fudan University and Shanghai Jiao Tong University.

“The COVID-19 pandemic has resulted in a number of changes for higher education, with many turning to online learning and teaching, and [fewer] students travelling internationally,” said Phil Baty, the chief knowledge officer at THE.

“We are looking forward to seeing how universities from emerging economies position themselves in the upcoming year and the opportunities they offer both internally and on a global scale.”

THE’s Emerging Economies University Rankings use the same 13 performance indicators as for its World University Rankings – to assess institutions across their teaching, research, research impact, industry income and international outlook – while aiming to take into account the disparities between emerging and developed economies by adjusting the indicators’ weightings to reflect more closely the characteristics of emerging universities.

The rest of the world

THE placed UCT at 155th position in its 2021 World University Rankings, published in September 2020, which assessed almost 1 500 institutions worldwide. In those rankings, UCT also retained its top spot in the country and on the continent.

Read about the methodology of the 2021 THE Emerging Economies University Rankings. 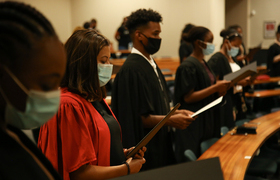