HIV infection may be driving drug resistance in tuberculosis

HIV infection may be contributing to acquisition of rifampicin‑resistance by Mycobacterium tuberculosis (Mtb) – the bacterium that causes TB – during first‑line TB treatment. An international team of researchers lead by the University of Cape Town’s (UCT) Associate Professor Helen Cox analysed health data spanning 10 years, from 2008 to 2017, to determine the influence of HIV infection during previous treatment on transmission or acquisition of rifampicin monoresistant (RMR) TB. The team’s paper was published in The Lancet Microbe.

TB continues to afflict many populations as a leading global cause of death from infectious disease and is particularly serious in countries such as South Africa that has a high burden of HIV infection. An estimated 360 000 South Africans developed TB and 58 000 died of the disease in 2019. More than 13 000 people were diagnosed with multidrug resistant (MDR) or RMR TB in 2019, placing South Africa in the top 10 high‑burden countries. Worryingly, the proportion of RMR TB appears to have increased over time, now comprising 38% of all rifampicin‑resistant TB cases. Drug resistant TB infections do not respond to commonly used medications, making the disease more difficult to treat and increasing the risk of death.

“Using this unique data set allowed us to work backwards using data from patients who already had rifampicin-resistant TB.”

Associate Professor Cox, a contributing investigator at the Wellcome Centre for Infectious Diseases Research in Africa, together with colleagues, set out to answer these questions by analysing a large data set containing clinical information on all patients diagnosed with rifampicin‑resistant TB in Khayelitsha. The data set was linked with whole‑genome sequences of Mtb bacteria isolated from the patients. This allowed the researchers to identify genomically unique MDR or rifampicin‑resistant bacteria (unique isolates are assumed to represent acquired drug resistance).

Altogether, the data allowed estimation of the contribution of HIV infection to resistance acquisition.

She acknowledged the invaluable contribution of the Western Cape Provincial Health Data Centre, explaining the key role of the centre in the novel data analysis, which allowed estimation of increased risk at a population level. Cox also paid tribute to the centre’s “incredibly valuable” work during the COVID‑19 pandemic.

Results of the study show that patients who were HIV-positive during previous TB treatment courses were more likely to be infected with genomically unique Mtb strains – that is, strains that acquired drug resistance during treatment. These strains were more likely to be RMR TB than MDR TB. It is possible that HIV infection, compounded by advanced immunosuppression and antiretroviral therapy, might lead to lower concentrations and variable metabolism of TB drugs within the body, creating an environment conducive to the development of drug resistance.

“It’s important to note that acquiring resistance during treatment is not due to poor adherence to TB treatment by patients. In the past, patients with drug-resistant TB have often been blamed for not taking their TB medications properly,” Cox emphasised.

Although the results of this study strongly suggest that HIV is driving the emergence of RMR TB during treatment, more work is required to refine understanding of the risk imposed by HIV infection during TB treatment, and ultimately inform updated clinical policies and practices that will reduce acquisition of rifampicin-resistant TB.

“Our next step will be to further utilise health data from the Western Cape Provincial Health Data Centre to try and quantify the increased risk. In the meantime, studies are under way that may result in increased doses of rifampicin being used to treat TB. This could be one way of reducing the risk of resistance being acquired during TB treatment,” said Cox. 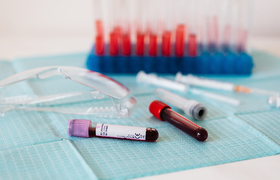