A recent virtual celebration held by Diamond Light Source, the United Kingdom’s (UK) national synchrotron, has highlighted the University of Cape Town’s (UCT) part in an international collaboration that is developing African capacity to use the high‑tech, large‑scale infrastructure of synchrotrons to underpin the study of biology, catalysis and energy materials at atomic resolution.

Synchrotrons are very large machines (the size of several rugby fields) that accelerate electrons to almost the speed of light; they generate electromagnetic radiation which is used to examine the structure of matter, from the sub‑nanometre dimensions of electronic structures to the micrometre and millimetre level used for medical imaging. Applications of this technology are wide‑ranging, and include chemistry, geology, palaeontology, condensed matter physics, material sciences, biology and medicine.

The programme has funded the research of some 30 postdoctoral researchers, workshops on synchrotron techniques, exchange visits, and a Structural Biology resource centre at UCT housed at The Aaron Klug Centre for Imaging and Analysis/Electron Microscope Unit (EMU). Thus far the programme has led to the publication of over 50 research papers and the training of a new generation of scientists. In addition, nearly 20 protein structures have been deposited in the global Protein Data Bank, and over 230 remote and on-site shifts were used by the programme at the Diamond Light Source synchrotron (Diamond).

These results have been translated into 24 artworks, in a multidisciplinary collaboration between the scientists and the women of the Keiskamma Art Project in the Eastern Cape. The richly embroidered tapestries tell the stories behind the science, and attempt to engage a wider audience in the work.

These achievements were celebrated at the Diamond-hosted virtual event, which marked the end of this funding cycle. It was chaired by scientist and grant co-investigator Sir Richard Catlow, a chemist and professor at Cardiff University and University College London, and foreign secretary at the Royal Society. The celebration featured case studies, examples of early‑career impacts, and the importance of Diamond’s collaboration.

Principal investigator Professor Chris Nicklin said that giving a new generation of synchrotron users access to world‑class equipment and investing in their skills and capacity had enriched and deepened research in the UK and Africa.

“Going forward, there’s a huge appetite across the START network for a ‘START 2’, especially if the ambition to build a synchrotron in Africa (the African Light Source) is to be realised,” he added.

“We are currently looking at ways to continue the momentum and build on START’s promising legacy.”

The UCT‑led components of the programme underpin UCT’s Vision 2030 pillars of excellence, sustainability and transformation.

Dr Lizelle Lubbe has solved the first high resolution cryo-EM structure of human somatic angiotensin-converting enzyme (ACE). This is a major scientific breakthrough that provides key insights into the biological mechanism of the enzyme, and facilitates the development of novel domain‑selective ACE inhibitors for the treatment of cardiovascular disease.

“UCT’s job was to establish a centre in which the entire structural biology workflow could be demonstrated using either electron microscopy or X-ray crystallography,” said Sewell.

“Our job was to hold workshops that would expand the number of structural biologists. Our centre would also support the establishment of resources at other universities, and the expansion of the programme to include historically disadvantaged universities.”

Under Dr Woodward’s leadership, UCT is also leading the determination of protein structures by cryogenic electron microscopy (cryo-EM). UCT has the only cryo-EMs on the continent, and the only equipment for cryo-EM sample preparation and data processing for the cryo-EM images.

“A major problem that had to be solved was actually getting the material to the synchrotron for analysis under cryogenic conditions. Solving this problem, especially in the light of strict application of customs and port health regulations during the pandemic, was not trivial,” Sewell added.

The shipping and return of samples were handled by Sean Karriem in the EMU, supported by Judy Fillmore in UCT’s Foreign Purchasing and Payments.

“They are the unsung heroes of the programme,” said Sewell.

Exchange visits were also an important part of the programme, but were cut short by the COVID‑19 pandemic.

“However, those that did occur made a huge difference to the work of the people involved,” said Sewell.

Funding of the kind provided by the GCRF START grant is essential for new researchers, said co-investigator Professor Claeys.

“If you don’t have this kind of network and support, it is incredibly difficult for those who are starting in the field. It’s about self-esteem, so this is where the GCRF START grant has played a vital role – improving output, and building confidence. Using synchrotron techniques can seem overwhelming to those new in the field.”

Catalysis researcher Dr Mohamed Fadlalla is one of the programme’s successes. Dr Fadlalla, who is researching energy materials, began as a GCRF START‑funded postdoctoral research fellow in 2018. He has since been promoted into a leadership role as a research officer.

Claeys said that Fadlalla’s story demonstrated how scientific development and scientist career development could work symbiotically, in this case assisted by the GCRF START grant.

“As well as facilitating amazing science, the GCRF START grant played a substantial role in my career progression as a scientist,” said Fadlalla.

“This has not only focused my interest into energy materials catalyst development; I have also learnt new energy materials characterisation techniques and conducted experiments at Diamond, which were very successful.”

Fadlalla also started teaching on the Catalysis Institute’s MSc course, where he now passes on his new skills to up-and-coming scientists in Africa. He has since received an NRF‑Thuthuka grant and UCT block grant to support his future research. 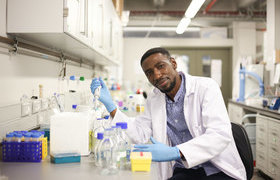 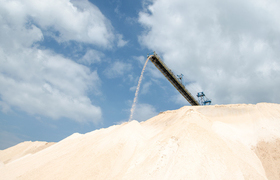