‘As much as education changes lives, lives should change education’

The impact of education on lives was an observation from University of Cape Town (UCT) Vice-Chancellor Professor Mamokgethi Phakeng at the relaunch of the Life Sciences Across the Globe (LSAG) seminar on Wednesday, 5 May. Professor Phakeng was one of the four speakers addressing attendees under the theme “Inclusion of Underrepresented Populations in Science”.

Growing up poor in an underprivileged South African context, education was a way out for Phakeng; a way to rewrite her life’s trajectory. But the perception that education is a “solve-all” carries its own risk, she said.

“To think of education as only changing lives is to assume three things about it: that it’s neutral, perfect and doesn’t need change [and] that education is benign, innocent, [only] positive and that education takes place in a static world.”

Speaking to the theme and referencing the idea of non-traditional approaches, Phakeng explored some critical questions: “Why are we concerned about inclusion of underrepresented populations in STEM [science, technology, engineering and mathematics]? Are we going to continue doing what we’re doing forever? Is what we’re doing a sustainable solution to the problem? Does a solution exist?”.

The VC said that the #MustFall student protests in 2015 and 2017 in South Africa, where students challenged the idea that their only option was to accept the existing education system as it was, left her interrogating “whether and how education changes lives”.

Phakeng made the case that the protests called for a “complete rejection of the systemic, symbolic and intellectual worlds which [students said were] inhospitable. [Students] made a point that they do not feel at home in our universities; that they do not recognise themselves in what they must learn, the buildings, the artworks, the curriculum, or the people teaching and leading them. They demanded what they phrased ‘the decolonisation of higher education’.”

The response from various tertiary institutions and government leadership was to consider the idea that lives can change education, resulting in various university departments across the country starting to rethink their curricula.

“We’ve got to start critiquing what we teach, how we teach, and who teaches it.”

“In my current role as vice-chancellor, I often wonder whether there is a possibility that some students emerge as drop-outs from our universities because they are resisting or refusing to read the world the way they are being taught … But we also have to ask how much of the values of underrepresented groups are embedded in what the university is,” said Phakeng.

The seminar Phakeng was addressing was just one of a series of monthly talks centred around a chosen theme of international interest and high impact in science and science culture. Having been launched as a weekly seminar series on 1 July 2020, the sessions are now set to run on the first Wednesday of every month, for an hour-and-half. Each event will bring together speakers and a moderator from different countries.

Spanning five continents, the series is a partnership between eight institutions. Janelia Research Campus, the Howard Hughes Medical Institute’s (HHMI) pioneering research centre in the United States (US), serves as the main organiser. Partners include:

Each month, one of the partners will host the event featuring leading scientists and scholars from around the world, showcasing the most exciting scientific advances and discussing important issues related to science and society.

“These eight partnering institutions are in collaboration because of the belief that global communication and cooperation in science is more important than ever for the world’s future.

“We see this need for international cooperation in tackling disease, climate change, preservation of bio-diversity and much more,” said Professor Ron Vale, the executive director of the HHMI.

Professor Vale introduced the relaunch and added: “We hope LSAG will remind you that knowledge generated through the activity of science is a global public good; that the process and evidence-based reasoning of science is a type of universal language. [And] that science nurtures friendships and people throughout the world.”

“Knowledge generated through the activity of science is a global public good.”

Moderated by Dr Kenneth Gibbs from the National Institute of General Medical Sciences in the US, other speakers at the first seminar included Dr Michael Summers and Dr Freeman Hrabowski from the University of Maryland, who offered statistics and context about the evolved ethos of their programmes. They referenced a Black student protest against the University of Maryland in 1987, fuelled by it being perceived as racist. This served as a catalyst for the implementation of various interventions by the institution over recent decades to improve diversity and integration in their programmes.

Dr Summers concluded their presentation with the reminder that, “traditional approaches don’t lead to major changes”.

Professor Ramakrishna Ramaswamy from the Indian Institute of Technology Delhi, echoed Phakeng in his presentation when he said: “The participation of the taught in the teaching is integral to both the curriculum and the instruction.”

The inclusion of underrepresented populations in science is being vigorously interrogated by the institutions represented by the seminar’s speakers, and by many others the world over. The conversation is critical but alone it’s not enough to catalyse change; the difference lies in action. The difference is being yielded by the real, practicable change and integration which, for many of these institutions, has been years in the making.

*The next LSAG session on “Non-coding RNAs and Epigenetics” will be hosted by China’s CLS on 2 June. 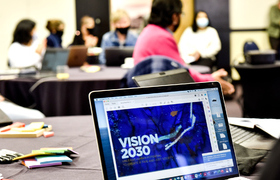