‘Don’t be afraid to be first’

Tabeth Masengu became the University of Cape Town’s (UCT) first recipient of a jointly awarded PhD in Law, in this case with Ghent University in Belgium, when she defended her thesis online in May and concluded her exams in June. Her examiners were unanimous in awarding her the doctorate without corrections, confirming that Tabeth’s inclination to do things differently and always be amenable to change had paid off.

The youngest of six siblings, Tabeth was raised in Kitwe in Zambia, where her father, a lawyer, hoped that at least one of his children would follow him into law. It was only in 1994 when, captivated by the action and drama of the televised OJ Simpson trial, Tabeth decided that it would be her.

However, the dream of being a criminal lawyer faded when she became aware of gender disparities and developed an interest in women’s rights. She was encouraged by her enlightened mother, a nurse, who insisted that her daughters embrace their independence.

“It was probably the first time that I realised how I disliked being told that I was not capable of doing something.”

In an early display of academic resolve, she defied naysayers who told her that undertaking a straight Bachelor of Laws (LLB) at Rhodes University would be too onerous for her and that she should enrol for a BA Law instead.

“The BA option was longer and meant additional fees for my parents and, given the exchange rate and international fee, this was not feasible. It was probably the first time that I realised how I disliked being told that I was not capable of doing something. I worked hard and, of the five people who graduated with distinctions in my year, I was the only one with a straight LLB,” she said.

It was while she was a candidate attorney for the Pietermaritzburg firm Tomlinson Mnguni James that Tabeth acknowledged that her future undeniably lay in human rights.

“I saw how people who came to the firm needed help but could not afford it. As soon as I completed my articles, I left.”

She moved to Cape Town and, while looking for work, applied to volunteer on the Treatment Action Campaign. As it happened, the secretary-general needed a researcher and offered Tabeth a job. Before long, she was promoted to project manager. What followed were 16 months of interesting advocacy work in health, women’s and gender rights matters.

“It involved an amalgamation of human rights issues at an exciting time and was where my grounding in human rights really began,” she said.

Masterʼs in hand, Tabeth returned to Cape Town and began working as a researcher at the Democratic Governance and Rights Unit (DGRU) at UCT.

“Although, thinking I would stay in the NGO-world, academia was not in my plans. I took on the role when [the then director of the DGRU] Richard Calland said that the unit wanted to build its gender angle. I had the passion and they had the gap,” Tabeth said.

“It was great to establish and work on a gender transformation campaign, which not only addressed the judiciary but also looked at who was making the decisions, and asked where the women were and why they were missing. I thought I’d give it two years. But before long I was promoted to senior researcher and [was suddenly] in my fourth year there.”

“He also encouraged me to do a PhD on the subject I was working on because it was my passion.”

Prompted by her colleagues, she began thinking about doing a PhD. The challenge was to find the time while working in a job that involved long hours and plenty of travel.

“I got some good advice at the time, including that from retired Professor Evance Kalula, who told me to find a programme that would allow me to take time off to do my degree. He also encouraged me to do a PhD on the subject I was working on because it was my passion and I had great networks in the area,” she said.

“That’s when the idea of doing a joint degree came about; I would look for a grant that would allow me to focus on my doctorate.”

Cheered on by her mentor and friend, Professor Caroline Ncube, Tabeth succeeded in registering for a joint doctorate. Having already begun the PhD in Cape Town (supervised by Professor Hugh Corder), once she had completed her field work with the DGRU, she went to Belgium to undertake the other part of it at Ghent University under the supervision of Professor Eva Brems.

Although there were challenges along the way – as the UCT Faculty of Law’s first jointly awarded PhD, the process was uncharted – they were offset by the many rewards of working towards a joint degree. Not only did Tabeth have access to twin resources and supervisors with different areas of expertise and insights, but she also had the opportunity to build networks and experience working in different parts of the world.

“Just because it has not been done previously does not mean that it cannot be done.”

It was hard work but not all-consuming; she found time to meet the man who is now her husband and the reason she has settled in Belgium.

COVID-19 meant that Tabeth had to defend her thesis via Zoom before a panel chaired by the dean of Ghent Law, four further examiners (two from Ghent, two from the United Kingdom) and her two co-supervisors. The UCT exam process then followed. All three external examiners were unanimous, and she passed the degree without corrections.

Tabeth is currently consulting in the areas of human rights, gender equality and governance, and is undertaking studies for the European Commission for the Efficiency of Justice and the European University Institute. Her PhD, she said, has not only given her the experience and confidence to move into consultancy work, but it has also underscored her worth and proven what she is capable of.

“Tips for others who might consider similar journeys? Be open-minded and avail yourself of as many new and unexpected opportunities as possible. I always thought I would live in Africa, but here I am in Europe,” she said.

“Also, do not be afraid of being a pioneer. If you want to do something, don’t let people put you off by saying that it has never been done before. Just because it has not been done previously does not mean that it cannot be done. Also, if you don’t do it, someone else will.” 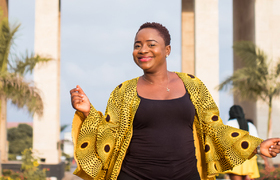