The ParaSports Club at the University of Cape Town (UCT) is on a mission to have blind football included as one of the university’s official sporting codes. As one of the first steps towards achieving this goal, the club hosted a benchmarking webinar on the growth of the sport in other parts of the continent and for tips and advice on what UCT needs to do to get the ball rolling.

Muya Koloko, one of the founding members of the UCT ParaSports Club and the organiser of the webinar, said that the club has been facilitating ongoing conversations with stakeholders on ways to include blind football as an official UCT sporting code.

“UCT is in a prime position to build not only blind football, but parasport in general.”

He said that the club had earlier collaborated with the League of Friends of the Blind (LOFOB) to host a series of workshops to introduce both students and staff to the sport. He described the webinar as phase one of an ambitious endeavour to grow the sport on campus, in the province and eventually in the country.

“UCT is in a prime position to build not only blind football, but parasport in general. A university’s place is to innovate, educate and improve. Sport is an easy way to build community connections and to make a lasting difference in the lives of people,” Koloko said.

The next steps for the UCT ParaSports Club are to further familiarise themselves with the sport, evaluate the opportunities and stumbling blocks and assess how best to integrate blind football as an official sport on campus.

“We plan on pushing integrated friendly matches to get as many players with or without visual impairments to try the game and gain interest.”

Short-term plans are focused on collaborating with UCT Football and LOFOB to establish two blind football teams to play in a mini competition. The medium- to long-term goals, Koloko said, are to use the competition as a vehicle to drive awareness of the sport, and ultimately to host a Western Cape Blind Football League.

“So far, we’re only at step one, which is us trying to create awareness of the sport. Once that awareness grows and the situation allows, we plan on pushing integrated friendly matches to get as many players with or without visual impairments to try the game and gain interest.”

According to Keon Richardson, an international sport and development officer with a special interest in disability football, 22 African countries currently participate in blind football. Participation, he explained, ranges from grassroots level to school and community participation, and some countries – including Zimbabwe and Morocco – also participate in the sport on a professional level.

When playing in a five-a-side football match, Richardson said, all players except the goalkeeper are blindfolded and the ball is modified to make a jingling or rattling sound to help players track where it is coming from.

“The sport is evolving on the continent [although] it takes time and patience to develop and we need to promote it [further].”

He added that coaching blind football requires commitment, thorough focus on development and a love for the sport. Coaches should concentrate on their technical and tactical development competencies – and coaching in general involves more physical interaction than verbal cues.

Koloko said that the club hopes to host a blind football clinic during the course of 2021, depending on the COVID-19 pandemic. The University of Venda and Nelson Mandela University have been earmarked to be part of the event.

He said that formalising the partnership with LOFOB and other stakeholders will be a priority in order to facilitate blind football friendly matches featuring blended teams of players.

“We have started the work and hope to have a stable foundation by 2023. At UCT we have the human, financial and physical resources to make this happen and to provide opportunities for sport for all in our community.” 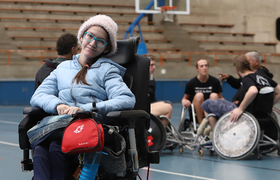 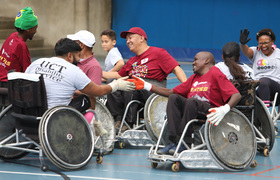 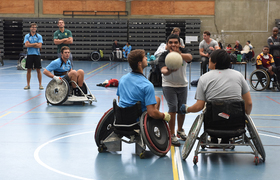