On Wednesday, 9 September 2020, Advocate Bizos passed away peacefully at the age of 92. He led a long, principled and courageous life, with an unwavering commitment to freedom and justice for all.

Bizos acted as an advocate in the 1950s for Nelson Mandela and Oliver Tambo’s law firm and played a part in all the major trials of the 50-year-long struggle against apartheid. He is credited with helping craft Mandela’s impassioned plea to the court during the famous Rivonia Trial, which is said to have swayed the judge from passing the death sentence on Mandela.

In 2008 UCT recognised Bizos’s contribution to South Africa and the liberation struggle with an honorary doctorate in law. This was during a time when xenophobic violence had erupted across the country. Honouring Bizos simultaneously highlighted his contribution to the liberation struggle and the rule of law and the achievements of a man who arrived in South Africa as a refugee with no formal qualification and no grasp of local languages.

Bizos was born in 1928 in Kirani, a small coastal village in Greece, into a struggle against fascism. His birth coincided with a volatile time in Greek politics, characterised by division and fighting between democrats and fascist royalists. The Bizos family were democrats and, following a fascist coup, Bizos’s father, Antonios, was forced to resign from his position as mayor of the village.

When the Second World War broke out and the Nazis moved into Greece, Bizos’s father helped organise the escape of seven New Zealand soldiers he found near Kirani. The young Bizos chose to accompany his father and the soldiers. They travelled on a fishing boat and were fortunately spotted by those aboard a British ship and were sent to South Africa as refugees.

When Bizos and his father arrived in Johannesburg, their train had to miss the stop at the central station because of demonstrations by Nazi sympathisers, who were, according to Bizos, protesting the arrival of “the vuilgoed [scum] of Europe into their country”.

In 1942, at age 14, Bizos spent his time working long hours in a shop. Fortunately, a teacher, Cecilia Feinstein, took him under her wing and insisted that he complete his education. Bizos scraped through with an E for English and Afrikaans. He went on to study at the University of the Witwatersrand with funds his father had managed to scrape together.

In his late 20s Bizos met an art student while travelling on a Bez Valley bus. Arethe “Rita” Daflos would later become his wife, and they were married for almost 70 years. They had three sons, three daughters-in-law and seven grandchildren. The two were also known for their green fingers and boasted a vegetable garden at their Johannesburg home.

Bizos was part of a remarkable group of young lawyers who began practising soon after apartheid’s National Party came to power in 1948. His peers included Mandela, Tambo, Duma Nokwe, Sydney Kentridge and Joel Joffe. Among the group’s role models were formidable senior lawyers and anti-apartheid campaigners, such as Bram Fischer, Vernon Berrangé and Isie Maisels.

While the National Party chose to use the law as a tool for oppression, this group of lawyers instead used it to protect their clients against the brutality and abuse of power by the regime.

Bizos’s landmark trials and work included the defence of participants in an anti-pass protest march in Lichtenburg (then the western Transvaal); defending those involved in exposing the notorious conditions on Bethal potato farms; the Treason Trial; the Rivonia Trial; Bram Fischer’s trial; the trials of Winnie Madikizela-Mandela, who was hounded by the security police; the NUSAS Five trial; the Soweto trials; the Biko inquest; and, most debilitating of all, the long Delmas Treason Trial in the late 1980s.

Once the apartheid regime had been defeated, Bizos was tasked with moving the country’s new constitution through the courts. He was also integral to ensuring capital punishment was struck from the codes of what is permissible in a civilised society.

Following the transition, Bizos continued in his pursuit of freedom, justice and equality for all. Among his contributions were providing representation at the Truth and Reconciliation Commission for victims of apartheid atrocities, leading the Legal Resources Centre’s team at the Marikana Commission of Inquiry, seeking justice for Ahmed Timol’s family and other families whose loved ones were murdered in detention, and leading the establishment of the SAHETI School in Johannesburg.

Until his last, Bizos stood firmly for the principles of non-racialism and judicial accountability.

Advocate George Bizos received an honorary doctorate in law from UCT on 13 June 2008. 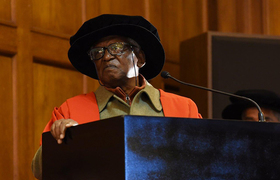 News
Magubane ensured that apartheid was not underexposed 16 Jun 2016