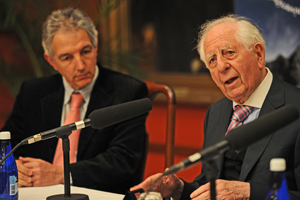 He was loath to comment on something he hadn't read and wasn't familiar with, Kentridge explained after delivering the 12th Annual Steve Biko Memorial Lecture at UCT on 12 September. But it wasn't that difficult to connect the dots in his talk, in which he looked back at the 1977 public inquest that, on the face of it, was meant to reveal the truth behind Biko's death in custody that year.

In his lecture, co-hosted by the Steve Biko Foundation, Kentridge spoke of the national and international outcry following Biko's death. He outlined the details of the inquest, where he, George Bizos (in the audience at UCT) and the late Ernie Wentzel, a UCT law graduate, had represented Biko's mother and his widow, Ntsiki. (Ntsiki Biko also attended the lecture, along with other family members.)

If there was consensus at the inquest that Biko had dead of extensive injuries to the brain, then the "real issues", explained Kentridge, were rather the cause of those brain injuries, and the way Biko had been treated throughout his detention.

The security police denied ever assaulting Biko. Instead, they blamed the injuries on a scuffle that followed after Biko's supposed attack on the officer in charge of his interrogation, Major Harold Snyman. (Kentridge also refused to name Snyman, whose application for amnesty to the Truth and Reconciliation Commission in 1997 was turned down on the grounds that he and others had not made a full disclosure on the 1977 events.)

Despite the medical evidence that suggested that Biko had been assaulted and, shackled and stripped naked, had received no proper medical care for days after the assault, the presiding chief magistrate found otherwise. There was no evidence, he concluded, that anyone was responsible for Biko's death.

"Given the history of previous inquests into deaths of detainees, the verdict, perverse as it was, was by no means a surprise to us," said Kentridge. 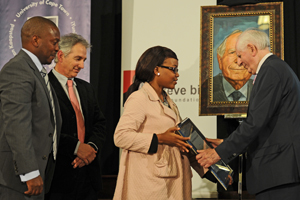 One of the lessons to come out of the Biko inquest, and apartheid as a whole, was the need for an independent and critical free press, said kentridge. (Later in 1977 he would represent the Rand Daily Mail and its political correspondent - and now premier of the Western Cape - Helen Zille, brought before a press council for revealing the true details behind Biko's death. The press council found in favour of the government.)

While the press was "surprisingly free" to criticise government action during apartheid, Kentridge said, it was a criminal offence to publish any false statement about the police or about prisons unless the publisher could show "due care" had been taken before publishing. Due care, however, included giving the authorities advance notice of the proposed publication, and waiting for the authorities to comment.

"The chilling effect on the press was inevitable."

So beware of any law that seeks to regulate the press, Kentridge cautioned.

"Still more dangerous would be any extension of the Official Secrets Act beyond its traditional scope of protecting military secrets which could be of use to any enemy," he added. "Any more general definition of official secrets would inhibit legitimate investigative journalism."

Price was not so guarded in his criticism of the Protection of Information Bill. Should the bill be passed, he said, the country would return to 1970-type conditions where, for example, those wishing to leak the Biko medical reports or publish details of the torture of prisoners would have been subject to criminal prosecution.

"Those lessons we had to learn once again after Biko's death under the control of the intelligence agencies; those lessons which we reaffirmed at the Truth and Reconciliation Commission, are all once again under serious threat of being negated with the impending signing into law of the Protection of Information Bill."

After a year of debate and protest, a number of gratifying changes have been made to the bill, said Price. But he urged civil society to continue to voice its objections.

"Let us hope that we can protect the rights of whistleblowers, investigators, professionals, academics, journalists and others to reveal the circumstances of future Steve Bikos." (video and podcast here).

YouTube Video: Sir Sydney Kentridge speaks on the public inquest into the death of Steve Biko