In the lead-up to World Poetry Day on 21 March, UCT News will be publishing poems from students and staff, particularly around issues related to human rights and about human rights activists.

In June 2018, The Guardian published “Leaving home at 10” by Professor Harry Garuba as their poem of the week. Each week, celebrated British poet Carol Rumens picks a poem for publication and discussion. With his selection, Garuba, who passed away on 28 February 2020, joined the company of William Shakespeare, Abdellatif Laâbi and John Milton, among other notable poets, whose work has been published as the “poem of the week”.

“Leaving home at 10” comes from Garuba’s second collection, Animist Chants and Memorials, which is dedicated to his father, Joel O Garuba. At a recent memorial at the University of Cape Town, honouring the late English and African Studies scholar, his sister Blossom recounted how, as a young boy, he would join their father in the early morning, catching up on the latest news on BBC.

In this poem, he writes of his father, and of being separated from his family as he begins his journey at a boarding school. But, as Rumens writes, the “most crucial loss of all” was Garuba having to speak English at his new school, no longer free to speak his native Uneme.

“Being ʻboarded up in a new home’ means being imprisoned in English and Englishness. The new language is bland food, with ʻneither spice nor biteʼ,” writes Rumens.

“The last line, brave and succinct, uncovers the depth of the wound: ʻI miss the language that once lived in my body’.”

They don’t make them anymore

All in order as only an old Peugeot can be.

Its creaking body held together by care,

My father drove me to the boarding school

In a small town one hour away from home …

My tears and the car held through the journey

Through the window, I watched the world rush past

I had known and loved, all running backwards, with

No time to pause for a goodbye, no time to wave

To the departing son leaving the embrace of home and hearth

We arrived over an hour later, father and son,

driving through the school gate to the dormitory

that was to be my home for the next five years.

Then my father left … and, averting my eyes, I cried.

On initiation night I recited the prescribed words:

“I am a fag, a rotten green toad. I promise

to give up all my rustic and outlandish ways

and to become a true student of Government College, Ughelli.”

Soon after I lost the language of guavas and spirits

And ever since I have been boarded up in a new home,

A new language with neither spice nor bite.

Let loose in the language of the body and the spirit

I miss the language that once lived in my body. 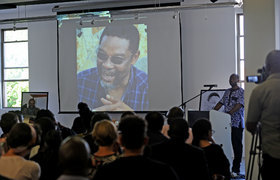 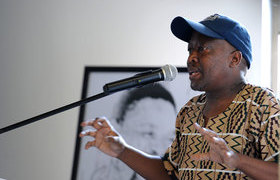 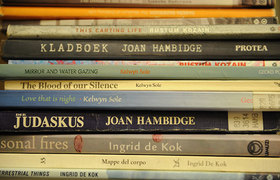