A series of seminars, workshops and films on primary healthcare taking place at the University of Cape Town (UCT) until 7 September will not only commemorate the 40th anniversary of the global adoption of the philosophy, but also rekindle the commitment to “health for all” as a fundamental human right.

Led by the Primary Health Care Directorate at UCT’s Faculty of Health Sciences, the programme, which has been tagged PHC@40, is aligned with international initiatives that focus on primary healthcare and its ongoing significance, particularly in the context of increasing poverty and inequality.

“This seminal 40-year milestone in global health has mobilised international health leaders to renew their commitment to strengthen primary healthcare with a new declaration [which will be ratified] at the Global Conference on Primary Health Care in Kazakhstan on 25 and 26 October,” said James Irlam, deputy director of the Primary Health Care Directorate.

Primary healthcare and its call for “health for all” were originally adopted by 134 countries at a conference in Alma-Ata (now Almaty, Kazakhstan) in 1978. The philosophy, which was then considered revolutionary, is based on the understanding that the solutions to major health problems lie not only in science, but also in the quest for social justice and the improvement of the life of the poor.

“The philosophy [behind primary healthcare] … is based on the understanding that the solutions to major health problems lie not only in science, but also in the quest for social justice and the improvement of the life of the poor.”

The Declaration of Alma-Ata defined health as a state of complete mental, physical and social well-being, rather than simply the absence of disease or disability.

It also asserted that health is a fundamental human right, and supported the promotion of good health, interdisciplinary and inter-sectoral collaboration in health matters, along with equitable access to healthcare that is patient-centred, acceptable, affordable and sustainable. This approach was summed up by the phrase, “Health for all”.

South Africa adopted the primary healthcare philosophy as the basis of its health policy and healthcare service delivery in 1994.

“The philosophy also lies at the heart of the faculty’s vision, and is a lead theme for teaching, research and social responsiveness,” said Irlam.

The anniversary and the renewal of the declaration, he added, provides the faculty with the opportunity to highlight the importance of continually examining how appropriate, accessible and affordable its research, teaching and healthcare services are to the communities it serves.

The PHC@40 programme has been categorised into six themes: It’s for everyone (universal access to healthcare; Leaving no one behind (human rights and equity); Let’s get moving (health promotion); We’re in this together (building partnerships); It’s more than medicine (providing complete care); and Includes you (caring for yourself too).

Although the programme concludes on 7 September, the commemorative activities will culminate in a faculty symposium in October to coincide with the Global Conference on Primary Health Care in Kazakhstan. 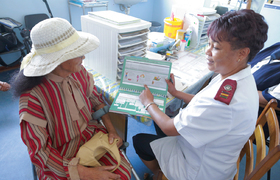