UCT has the most publicly visible scientists in South Africa, a new study involving 42 research institutions has found. The results were published in the South African Journal of Science this week.

The study, conducted by lead author Marina Joubert and Lars Guenther of the University of Stellenbosch, identified 211 “publicly visible” scientists in South Africa, which is less than 1% of the country’s scientific workforce. More than half of these researchers work at only four universities.

The 211 scientists were identified by a group of 45 journalists, science communicators and researchers interested in the public communication of science.

It is the first study in South Africa to identify the country’s highly visible scientists and has meaningful policy implications for mobilising science towards public science engagement, says Joubert. The findings are also an important contribution towards the Department of Science and Technology’s new public engagement framework.

A visible public profile is considered part and parcel of being a scientist and is expected of those in leadership roles. While scholarly publication and citation rates are important currency in academia, these are insufficient to create public visibility, according to the study. Instead, the strategic use of traditional and digital media platforms is essential.

“Because of their ability to spread their ideas, influence decision makers and promote scientific culture, high-profile scientists are considered by some as the new academic elite and increasingly recognised as powerful socio-political influencers and opinion leaders [who] have power within and outside the science arena,” reads an excerpt of the study.

However, many scientists remain sceptical about high public visibility and the potentially damaging effects of a high profile on their scientific reputations. Many are apprehensive about the risks of social media.

Joubert’s research, which underpins the first part of her PhD at Stellenbosch’s Centre for Research on Evaluation, Science and Technology, shows that the country’s two most visible scientists, the ‘rock-star scientists’, are Professor Lee Berger of the University of the Witwatersrand, whose team made the Homo naledi discovery in the Rising Star cave system, and UCT sports scientist and Banting diet proponent Emeritus Professor Tim Noakes.

Both are internationally rated senior scientists. The study also discusses some of the factors that contributed to Berger and Noakes’s public visibility, such as controversy and public and peer criticism.

The authors write: “Controversies … characterised by an intense focus on a specific individual, may discourage other South African scientists from going public with their research findings. It is therefore important to understand how visible scientists cope with and respond to controversy, and to discover what lessons other scientists can learn from their experiences.”

Demographics in the mix

The average age of the top 18 candidates in the group, the most visible in the public domain, is 52. Of this top group, 11 are white and seven black. Only one of the group does not have a PhD.

UCT researchers make up a third of this top 18. Besides Noakes, they are professors Anusuya Chinsamy-Turan, Linda-Gail Bekker, Bongani Mayosi, Kelly Chibale and Jill Farrant.

“It is important to identify and understand the role of these visible scientists because they are able to influence public opinion about science and are seen as role models that shape the image of scientists in society,” says Joubert.

Read the study in the South African Journal of Science... 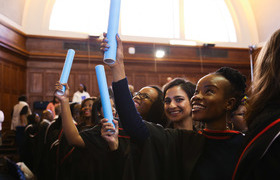