The new eyes on UCT’s dam

Over the past few months, UCT News has been reporting on the ongoing water crisis in Cape Town in its efforts to raise awareness of the drought and its very real consequences.

One of these articles focused on the efforts of UCT researchers to improve water storage in the dam on upper campus while there was still some winter rainfall. The dam has the largest water storage capacity on campus, yet it has suffered from years of neglect and was nearly empty.

Some researchers puzzled over why the dam levels were so low.

On investigation, it was found that a valve was leaking at a pump station near the soccer field on lower campus. The valve has since been replaced, but there may be other leaks in the system and we can expect further losses resulting from evaporation and infiltration over the coming months. In addition to this, some water has been used as a temporary measure to irrigate the cricket pitches.

Sadly, the dam level is so low right now that the outlet irrigation pipe is protruding above the surface of the water. The conclusion among members of UCT’s Water Crisis Task Team was that much more attention needs to be given to understand the water balances within the system: input, storage, losses and output.

These loggers have multiple applications when dedicated sensors – which can measure water quality and discharge, among other things – are attached to the unit. In this instance, the logger has been combined with a low-cost level sensor that has become the ‘eyes’ on the dam.

Using a microcontroller, an ultrasonic level sensor and a GSM (cellphone) module to send data at regular intervals to a dedicated server, the remote monitoring device collects real time data on the changing height of the surface water levels in the dam.

It is a smart way of determining small changes in the water levels. Ultrasonic sound is bounced off the water surface and the ‘echo’ is received by a second sensor. The microcontroller translates the speed of sound (time) into distance (height) above the water. This data is then used to measure changes in the volume of water in the dam.

The device is currently being used in a project that is monitoring water levels and the rate of discharge in the Elsieskraal River from Pinelands to Durbanville. It is generating high-resolution, reliable data at five-minute intervals at a fraction of the cost of a conventional gauging station.

Aligning with the mantra of “You can’t manage what you don’t measure”, this device is capable of sending high-quality continuous data, which will be used for improving the management of the UCT dam in the future.

This is essential since the UCT dam could be a critical lifeline for the campus – and for the City of Cape Town – whether in the event of fires or for other necessary purposes. 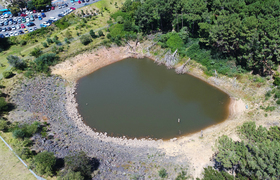 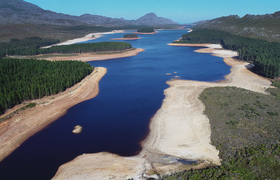