UCT scientists are part of an international team that has revealed how canny baboons in Cape Town use a sit-and-wait tactic before raiding people’s homes for food. This has been shown by data gathered from bespoke baboon-tracking collars.

“Raiding baboons are a real challenge in the Cape Peninsula,” said Professor Justin O’Riain, the director of UCT’s Institute for Communities and Wildlife in Africa and co-author of the study “Extreme behavioural shifts by baboons exploiting risky, resource-rich, human-modified environments”, published by Scientific Reports.

“The baboons enter properties to raid in gardens and bins, but also enter homes and sometimes take food directly from people.”

In a previous study, the team showed that while Cape Town’s baboon-management strategy was keeping baboons away from the urban space, some males were still finding ways in. The team built bespoke baboon-tracking collars and, using GPS and accelerometer sensors, tracked the movements and activity levels of 10 males.

Lead author of the study Dr Gaëlle Fehlmann said, “People assume the baboons don’t have enough food in their natural habitats and therefore have no choice but to forage in town. In fact, our research shows there is plenty of food in the natural environment where there is very little risk of the baboons being disturbed by anyone. In contrast, the chances of human–baboon conflicts in urban areas are high, but so are the food rewards, which are 10 times richer in terms of calories.”

The collar data revealed that male baboons were staying at the city edge, engaging in short but intense forays to the urban environment when opportunity presented itself, similar to a sit-and-wait strategy.

Dr Andrew King, head of Swansea University’s SHOAL group and senior author of the study, added, “We suspected the baboons were doing something clever to allow them to minimise the risks associated with urban foraging, and the data collected from the collars confirmed this.”

The data shows that because of their raiding tactics, the baboons studied foraged for only about 10% of their time. This is considerably less than the non-raiding baboons in the Cape Peninsula or elsewhere on the African continent, which spend at least half of their time foraging.

Fehlmann added, “Our results present unequivocal evidence of extreme behavioural flexibility in these baboons. Behavioural flexibility has long been considered a central component of a species’ ability to cope with human-induced environmental changes, but has been difficult or impossible to quantify in wild animal populations. The new tracking technologies employed by the researchers are changing this.”

“Our results present unequivocal evidence of extreme behavioural flexibility in these baboons.”

Now that researchers have uncovered the raiding tactics of these canny baboons, strategies will be refined to further improve Cape Town’s already successful baboon-management programme. 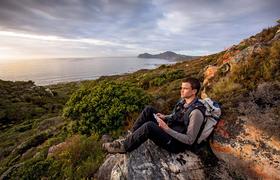 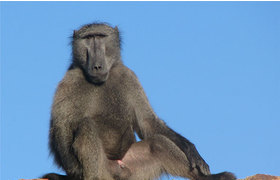 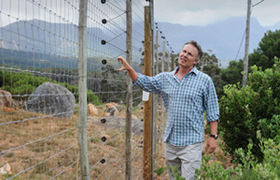