South African born Nobel Laureate and biophysicist, Professor Michael Levitt, will be delivering a series of public lectures at several universities in November 2017. He is being hosted by the Academy of Science of South Africa (ASSAf).

Levitt, a professor of structural biology at Stanford University and a distinguished visiting scholar of ASSAf, shared the 2013 Nobel Prize for Chemistry with Martin Karplus and Arieh Warshel.

His lecture, titled “Birth and Future of Multi-Scale Modeling of Macromolecules”, will highlight the development of multi-scale models for complex chemical systems, which began in 1967 with publications by Warshel and Levitt.

In his lecture, Levitt will describe the origins of computational structural biology and then show some of the most exciting current and future applications.

The event will be held from 17:30 to 18:30 on 16 November 2017 in the Wolfson Lecture Theatre in the Faculty of Health Sciences on Anzio Road, Observatory.

If you would like to attend, RSVP via email.

News
Vulnerability at the heart of explosions research 20 Sep 2017 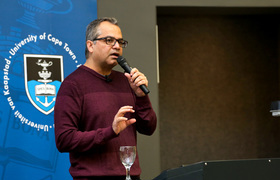