François du Toit has won this year’s Creative Works Award for the Five Beethoven Concerti, played on two consecutive nights with the Cape Town Philharmonic Orchestra. He described the six-month preparation (five to six hours daily) for the 90-minute concerts as being like “practising for a marathon”.

The performances were, however, the realisation of a lifelong dream for Du Toit. An associate professor and head of Practical Studies at UCT’s South African College of Music (SACM), Du Toit is an internationally acclaimed concert pianist and recipient of numerous awards and prizes. He is also in demand as a teacher, performer and juror throughout South Africa.

According to the citation for the Creative Works Award, the Five Beethoven Concerti represent the journey Beethoven undertook as a composer and a revolutionary in music, mirroring the times. The citation draws attention to the universal and apolitical aspects of music as a “language and can draw people from all cultures together”.

“The West-Eastern Divan Orchestra of Daniel Barenboim comprises musicians from various Middle Eastern countries such as Egypt, Iran, Israel, Jordan, Palestine, Lebanon and Syria. The aim of this orchestra is to promote understanding and tolerance between different cultures performing the works of great composers, including Beethoven. Also, in the darkest times of the Blitz in London during the Second World War, Dame Myra Hess performed Beethoven sonatas in the basement at the National Gallery to audiences from all walks of life.

“Classical music at the College [SACM] has bridged the diversity of all students’ backgrounds and it continues to enrich everyone’s lives with its universal message. For many, it is a rediscovered tradition. In life, the negative exists for the positive to shine through and rarely is it more true than in music.”

The performances, which took place in February 2016, also reflected this diversity: a collaboration between Du Toit, a Russian conductor, a “truly South African” orchestra and a local television studio.

“In a way, it is all about building up stamina − like practising for a marathon− and training yourself to focus and be ready for any eventuality,” Du Toit said.

He added, “I think it was Deon Irish, the music critic for the Cape Times, who made the bizarre calculation that over the two nights I played in excess of 86 000 notes, all from memory, the traditional curse of being a classical musician!”

Du Toit has had a lifelong fascination with Beethoven and “many years ago” spent six years in Germany as a postgraduate student – an opportunity for an intensive study of Beethoven.

“The issue of playing means that you really have to know every note inside out as you are part of a team with the orchestra and if you go wrong, they cannot help you. The standard procedure is that the rehearsals with the orchestra take place in the week of the concerts and we had exactly two rehearsals for every evening. I was very honoured that the Cape Town Philharmonic Orchestra entrusted me with this task.”

He added, “In terms of other collaborations and performances, I enjoy every invitation extended to me and each new collaboration is a challenge I enjoy tremendously.”

The Creative Works Award was officially conferred at the 14 July mid-year graduation ceremony. 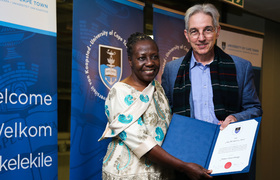 News
Pre-grad shindig all about the awards 14 Jul 2017