UCT's Champions of the Flyway

Three UCT students are off to Eilat, Israel, in late March to compete in the international Champions of the Flyway, an annual charity birding event which aims to combat the illegal slaughter of birds along their migratory flyways in the Mediterranean.

Unconstrained by the limitations of passports, borders and air-ticket prices, we can only marvel at the freedom of many birds' movements from their northern breeding grounds to their African wintering areas. Yet their travels expose them to extreme dangers along the flyways that connect the northern and southern hemispheres.

Each year over 25 million birds are killed along their flyways where they are bottlenecked by a combination of geographical features and their natural instincts. Here they become quite literal 'sitting ducks' for hunters who kill them illegally for sport and food or take them alive for use as cage-birds or hunting decoys.

Taking place on 28 March, this year's charity birding race will support a project in Turkey, which will join the likes of Malta, Greece, Georgia and Cyprus as a beneficiary of this event. The project has successfully been educating younger generations about the negative and unsustainable consequences of sport hunting and converting them to birdwatchers instead.

Teams from around the world gather to compete in the 24-hour race around the deserts of southern Israel to see who can record the most bird species on the day. More importantly, each team also competes to raise the most funds for the cause. 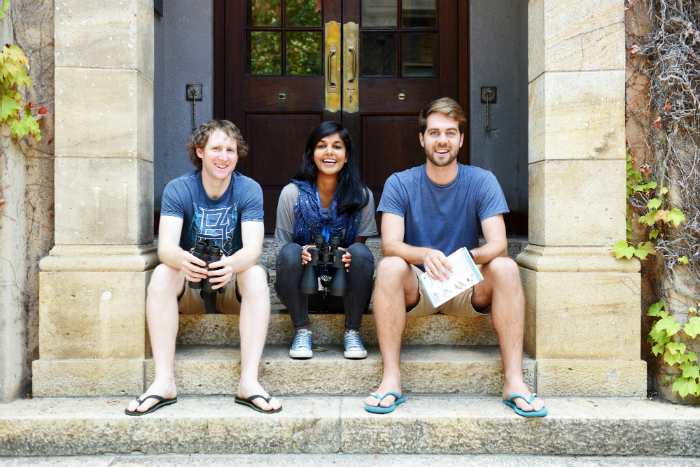 Dominic Rollinson, Jessleena Suri and Andrew de Blocq from the Percy FitzPatrick Institute of African Ornithology at UCT will be competing in the Champions of the Flyway charity birding event. Suri and De Blocq are committee members of the newly established UCT Birding Club. Photo Robyn Walker.

Jessleena Suri (PhD in statistical ecology) and Andrew de Blocq (MSc in biological sciences) will be competing with the Birding Ecotours Youth Africa Birders, while Dominic Rollinson (PhD in biological sciences) will be in the Birding Africa Black Harriers team. All three are affiliated to the Percy FitzPatrick Institute of African Ornithology at UCT.

According to De Blocq, most of the birds they are likely to see are not regular visitors to South Africa. With an overlap of just under 30% between the SA bird list and the birds of Israel, learning the 320-odd species is an intimidating task.

He says, “My most highly anticipated birds are the White-throated Kingfisher, Greater Hoopoe-Lark, Desert Owl and MacQueen's Bustard ... the owl and bustard are iconic species of the area.”

Suri says, “More than any one specific bird, I can't wait to see the sheer number of birds that pass through. That scale of migration is such a foreign, mythical concept to us in South Africa, yet it's easily one of nature's greatest wonders.”

Each of the teams this year are attempting to raise €3 500.

Follow the Birding Ecotours Youth Africa Birders and Birding Africa Black Harriers if you would like to support one of the UCT teams.