Back by popular demand

In a meeting held in Benin last year, Dr Heather Marco, a member of UCT's Next Generation Professoriate, was elected for the third consecutive time to serve on the executive committee of AGNES (the African–German Network of Excellence in Science).

AGNES is five years old, having been founded at a workshop held in Addis Ababa in November 2011. The 21 founder members of AGNES are alumni of the Alexander von Humboldt Foundation, which is based in Germany and counts 52 Nobel laureates among its alumni. 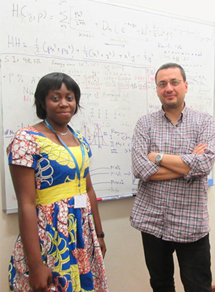 Murielle Tchakui and her research host at UCT, Dr Haris Skokos. "I wish to thank the AGNES program and the Humboldt Foundation for this opportunity - it has had a profound impact on my PhD studies." Photo: Supplied.

AGNES is a young supra-regional contact structure that was conceptualised by a group of 17 scholars from 11 sub-Saharan African countries and Germany. The envisaged role of AGNES is to strengthen academic excellence in sub-Saharan Africa by promoting regional networking and professional exchange between excellent scholars within the region and in Germany.

Under Dr Marco's leadership the membership, visibility and funding capacity of AGNES has been expanded. To date, AGNES has awarded 60 grants to African postdocs, and in 2016 (for the first time) has launched the AGNES Intra-Africa Mobility Grant – 17 grants were awarded to excellent master's and doctoral students.

One of the grantees is a third-year physics PhD student from the University of Yaoundé I, Cameroon. Ms Murielle Vanessa Tchakui spent two months at UCT's Department of Mathematics and Applied Mathematics where she collaborated with Dr Haris Skokos and his team on nonlinear dynamics of Hamiltonian systems.

AGNES is financially supported by the Government of Germany (via the Alexander von Humboldt Foundation and the Federal German Ministry of Education and Research) and The World Academy of Science (TWAS).

Dr Heather Marco is a member of the Next Generation Professoriate.