One of the most commonly surviving artefacts of Middle Stone Age sites are the triangular stone points our early ancestors used to go about their daily business of survival. But what they were used for exactly, whether as butchery tools, scrapers, spears or weapons, is less certain.

“Much less is known about stone tool function and variability than their nomenclature implies,” said Schoville, a postdoctoral research fellow in the Department of Archaeology and lead author of a new paper in prestigious scientific journal PLOS One.

The paper is based on work Schoville did for his PhD at Arizona State University. And although he's co-authored a paper in Science and one in Nature, this is one of his biggest first-author publications. His co-authors are UCT archaeology lecturer Dr Jayne Wilkins, an expert on Middle Stone Age sites in the Northern Cape; Dr Kyle Brown, a research associate in the same department; and Jacob Harris, an archaeologist at Arizona State University.

“Within the past 20 years there's been a shift in how Middle Stone Age behavioural adaptations are perceived,” said Schoville. “The traditional perspective viewed Middle Stone Age foragers as less adept hunters, technologically less sophisticated and culturally less complex than the Later Stone Age and Upper Palaeolithic humans. It's now recognised that Middle Stone Age hunters were highly skilled at acquiring diverse and 'dangerous' taxa and scavenging was not their predominant method of acquiring meat.”

While the nature of the damage to the edges of stone tools (micro fractures, polishes and residues) can be indicative of use and reflect how our human ancestors were responding to the landscape (“use-wear”), the many additional stresses stone tools are subjected to over the millennia produce other damage patterns, created by natural processes such as trampling and tumbling.

Existing methods use micro- and macroscopic features on tool edges, tool morphology and residue traces to determine what these could have been used for. Use-wear analysis identifies traces of micro fractures, polishes and residues that researchers have argued result from certain configurations of tools being applied to various materials.

“We wanted to go further than typical use-wear analysts by looking at the post-depositional processes affecting stone points and the effects of taphonomic processes [natural processes that cause damage] on the artefact edges and surfaces,” Schoville explained. “These processes have been acting on artefacts for thousands of years.”

They wanted to create a more sophisticated method of statistically determining the purposes of these stone stools, or the kinds of activities they were being used for.

Their first step in their analysis was to test whether the patterning on stone points – or lack of it – was consistent with taphonomic processes or with behavioural tool use.

Schoville and the team carefully created an experimental collection of stone tools and set out to subject these the same stresses of use-wear as well as the “disturbed” contexts of tools used and discarded or deposited across the landscape. The idea was to compare the stone points they'd recreated to stone point assemblages at three renowned South African Middle Stone Age sites: Kathu Pan in the Northern Cape, and the south coast cave sites at Pinnacle Point near Mossel Bay and Die Kelders.

“Kyle is an excellent flint knapper – he's been doing it for 25 years and figured out the steps needed to take a chunk of amorphous quartzite and turn it into stone tools,” said Schoville. “I can do a little bit, but he's the expert.”

They subjected their experimental tools to the same processes of burial as faunal remains; trampling, turbation and transport are all common post-depositional processes influencing the preservation of stone tools.

This Schoville did in a series of four experiments. First stone points were hafted to a wooden dowel using Acacia karroo mastic and sinew and shot into four culled springbok carcasses with a calibrated crossbow (in a back yard in Mossel Bay). Then across the Atlantic, a set of stone points was used as butchery tools on pig carcasses under the expert hand of Jeremiah Harris in Arizona.

The tools were then consigned to a designated area on a Californian wine farm for six months in the fallow season for trampling by domestic and wild animals. And last, stone points were jumbled in a rock tumbler.

The butchery experiment alone indicates how carefully the team reconstructed the tools.

“The butchery exercises were quite a bit of work,” Schoville noted. “We had to find the stone, collect it, flint knap it – knowing how to make the right shape and replicate what we'd have found in the past. Then we had to find a method to mount the stone on the wooden dowel.” This was done by using a resin or a kind of latex.

“We were surprised by how strong the tools were. One stone tool could butcher an entire animal if you kept the edge clean.”

It was a several-day process − and then came the consuming analysis at the end of each day.

“So it was a multi-stage process and the experiments were the fun part of it. You're working outside, figuring out how best to do things.”

Because exposed stone tools would have been vulnerable to being trampled by early humans and animals, the team conducted a trampling experiment in a vineyard in Northern California during five months of the fallow season. The farm kept small herds of cattle and horses and was visited by wild animals such as deer, bear and small mammals. Three different contexts were chosen, based on the anticipated amount of trampling expected and the stone points were distributed in grids.

Finally the team also used a rock tumbler to simulate the impact of fluvial activity on their stone tool edges. 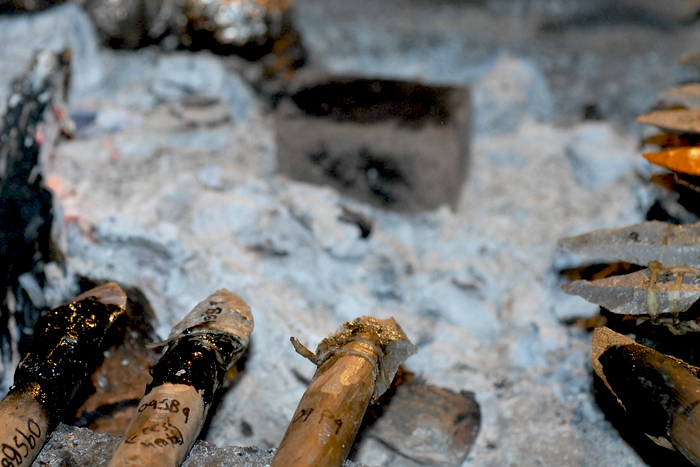 By statistically comparing the archaeological points to those used in their experiments, they showed that 500 000-year-old stone points from Kathu Pan were used mainly as spear tips, but the more recent stone points from Pinnacle Point and De Kelders were used as knives and spears, and for a greater variety of activities.

“Our study shows that people were making stone-tipped weapons for a long time, but these were also multi-purpose tools and likely reused in caves sites that were routinely visited by our early ancestors. These points were almost like Swiss Army knives; they were being used for a lot of different things.

“So that's one of the interesting results of the paper: people have been using points for spear tips for a long time − 500 000 years − so everything after that is probably just variation.”

The new study provides a quantitative method for inferring complex histories of stone tool use and discard through a 'best-fit' modelling approach to comparing archaeological edge-damage distributions with experimental damage patterning, says Schoville.

“It presents a methodological improvement to the edge-damage distribution method used previously because it includes new experimental data and a more sophisticated model-fitting statistical analysis.

“So it's a more quantitative way to do it; more statistically robust but it's also a more nuanced understanding because we're not saying: this tool was used for this one thing.  We're talking about the assemblage as a whole, which I think many archaeologists are more comfortable with. Because 500 000 years ago is a long time to state exactly what any one thing was used for.

“Resource extraction is pivotal to understanding foraging economies and inferring how stone tools were used provides insight into the spatial and temporal context of the fitness-enhancing benefits of lithic [stone] technologies.”

All in all, it will help us answer important questions about how these early humans responded to their landscapes and its resources – and even the dramatic climate changes of the last Pleistocene.

Schoville is now working on experiments with microliths, minute, stone shaped tools that may have represented bow-and-arrow technology, he says.

“We think that was around 72 000 years ago. And it was a breakthrough technology.”