The Paris Agreement, adopted by the United Nations in December 2015, aims to keep global warming to below 2 °C, but unless countries ramp up their climate-change-combating duties, global temperatures could rise by nearly double that by the end of this century.

This is despite agreement by countries to pursue efforts to stem global warming below even 1.5 °C, says UCT's Professor Harald Winkler, director of the Energy Research Centre. Winkler co-authored a global study that urges governments, the private sector and civil society to increase their efforts to essentially save the world. The study was published in the prestigious Nature journal on 30 June 2016.

Before Paris, each country submitted its strategy on how it planned to curb the increase of global temperatures and reduce climate change. These Intended Nationally Determined Contributions (INDCs) do not add up to the collective temperature goal, however.

“The centre of the article is around an assessment of the effect of these current INDCs on reducing greenhouse gas emissions,” says Winkler. “But there are many other issues. The article is clear about whether the distribution is fair, how much adaptation may be needed – adaptation is how we respond to impact. But the focus here is on mitigation.”

In short, if countries continue with half-hearted implementation, we're on track to seeing global temperatures rise by as much as 3.1 °C by 2100. This is a sobering scenario, admits Winkler.

“Essentially what we're saying is that what's been committed is great; the Paris Agreement also says more should be done,” says Winkler. “If countries don't implement INDCs and stronger efforts in future, then we won't get to the stated goal.”

The little bit that remains of a global carbon budget that would keep temperature increases well below 2 °C might be used up as early as 2030.

Joeri Rogelj, a researcher at the International Institute for Applied Systems Analysis (IIASA) who led the study, says, “The Paris Agreement … puts in place a flexible framework for a long-term transformation towards a low-carbon society. But our analysis shows that these measures need to be strengthened in order to have a good chance of keeping warming to well below 2 °C, let alone 1.5 °C.”

Niklas Höhne, a researcher at both the New Climate Institute in Germany and Wageningen University who also worked on the study, adds that reducing emissions by between 3 and 4 percent globally after 2030 would be needed to realise the Paris Agreement's goal.

“But in practice, switching to such stringent reductions right after 2030 would be challenging, and would require time – that means that in order to ensure a chance of meeting these targets, we need significant further action from countries before 2030,” says Höhne.

What could happen if we don't make the 2 °C threshold?

There's a whole body of work dedicated to the impact of climate change, and none of the predictions are comforting.

“The consequences range from everything from sea-level rise to water-borne diseases,” says Winkler. “There are huge impacts on water systems for agriculture, with some areas getting wetter and others getting drier, but generally the predictions for climate change goes along the lines of, the higher the temperature, the more the risk of negative impact.”

Do all INDCs aim equally high?

The short answer is, no, they don't. But sometimes there are good reasons for this. Winkler's own research focuses on the question of equity and the fair distribution of climate-change goals. 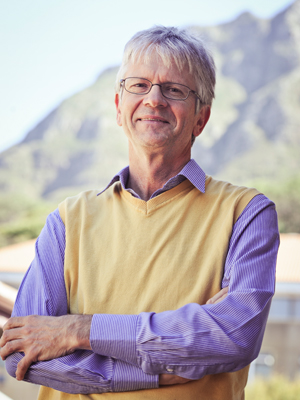 Professor Harald Winkler warns that strident efforts to cut carbon emissions need to be implemented at once, lest global temperatures rise beyond the liveable threshold by the end of the 21st century. Photo by Michael Hammond.

“Essentially, it's about political economy,” says Winkler. “Fossil fuel companies have a vested interest in high emissions. In our country, coal is the issue. We use coal for electricity. And 30 percent of our liquid fuel comes from coal. In other countries, the high-emissions interests are in the agriculture or forestry industries. Globally, it is the big fossil fuel companies that need to imagine a very different future.

“So when countries have a national discussion, it's effectively a national negotiation, asking 'What can we do?' There's a little bit of an effect of saying well, you know, if we take on a very large effort of reducing greenhouse gas emissions and our competitors don't, then maybe we're disadvantaging our economy.

“That may be a valid concern, but you can also make the argument the other way. To be competitive in the future, low-carbon society, we should proactively be investing in energy efficiency, renewable energy and all low-carbon technologies right now. But even more fundamentally, we need to have a national conversation about how the structure of our energy economy needs to change. We need to position South Africa to be a leader in some part of the future low-carbon economy. That means taking a long-term perspcective on near-term investment decisions. Or more plainly, investing in the future.”

Also, some countries may put less lofty goals on the international table, so if they exceed these more moderate goals, they look good, says Winkler.

“I think it is fair to say that it is mainly the fossil fuel industry that's holding back greater ambition,” says Winkler.

Renewable energy has come on in leaps and bounds since Winkler arrived at UCT in 2000.

“From almost nothing, it's grown really fast. We're now seeing a lot of renewable energy. Some technologies, notably wind and photovoltaics (PV), are now cheaper than new coal plants. However, other renewable-energy technology, such as concentrating solar power, is currently not cost-competitive.

“Wind and PV are now cheaper than new coal. That's an amazing turnaround. When I came to UCT in 2000, coal was considered the cheapest fuel for electricity – even in the world. That was partly because we weren't paying the carbon cost. Now we've passed a tipping point where the cleaner solutions are cheaper. And that's before the carbon tax has been implemented by treasury – that still needs to happen.”

Was the 2 °C goal a compromise figure? 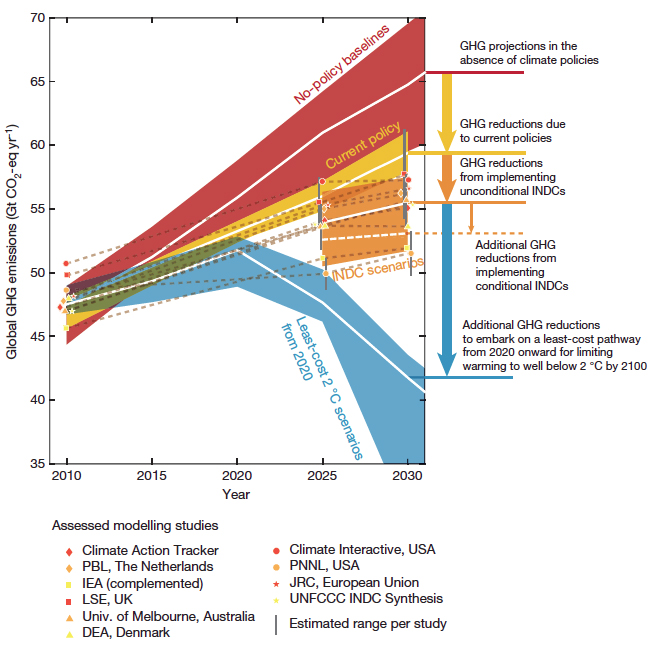 Global greenhouse gas emissions as implied by INDCs compared to no-policy baseline, current-policy and 2 °C scenarios. White lines show the median of each range. The white dashed line shows the median estimate of what the INDCs would deliver if all conditions are met. From 'Paris Agreement climate proposals need a boost to keep warming well below 2 °C', in Nature.

That number has been floating around for a decade or so, explains Winkler. There's been a backwards and forwards between the scientists and policy makers.

“The IPCC – the Intergovernmental Panel on Climate Change – has done a lot of work on the impacts of a given temperature increase, carefully assessing the probabilities and uncertainties over decades. What is very clear is firstly that climate change is 'unequivocally' due to human activity, and secondly that generally, the higher the temperature, the more negative impacts. For example, with 4 °C, you'll get more sea-level rise than with 2 °C.”

“But then the scientists say, 'We can't decide. There's no such thing as a safe limit.' Science punts us back to the United Nations Framework Convention on Climate Change, which aimed (back in 1992) 'to prevent dangerous anthropogenic interference with the climate system' ”.

“What is 'dangerous' is a value judgment. What is risk? How many more people who get malaria are you willing to accept? Do you accept five? Do you accept 500 000? 500 million?”

“So responding to climate change is a prime example of the science-policy interface. You need both the best available scientific information and the value judgements made by political systems. Well below 2 °C is our best effort at putting a number to what is not too dangerous.”

Since the Paris Agreement, countries have to report back on how they have been implementing their INDCs every two years, and they have to develop new INDCs every five years, says Winkler.

“Up until Paris, it wasn't a requirement. Now it's mandatory.”

Unfortunately, says Winkler, people may only start acting against climate change once things are tangibly much worse.

“If there was more extensive drought and more floods, if it becomes more and more clear that the climate is changing, then I think the people will say, actually, this problem is real.”