The Cape Flats are aflame yet again. The body count is climbing as the gangs square off in yet another unwritten chapter of this interminable war.

Six-year-old Saadiqah Lippert died on Monday 2 May outside her granny's Athlone house, when she was caught in the crossfire between two warring gangsters.

The month before, it was eight-year-old Mbulelo and 15-year-old Linathi Ngcwanga, in Nyanga.

The protagonists are almost always young men, many still in their teens; warriors in an urban jungle where the police are often scared to enter – at least, not without tactical equipment, armoured vehicles and reinforcements.

That helps to explain why Cape Town, lauded as one of the world's most beguiling destinations, is also one of its deadliest.

But the headlines don't tell the whole story.

Don Pinnock will tell you the gangs aren't the problem; they are only symptomatic of a phenomenon that affects every one of us.

It's a story of a lost generation, of unloved youths who become young adults who are not just unemployed, but unemployable.

They teeter on the edge of the abyss, threatening to pull down the entire edifice around their ears. But there is hope. The situation can be reversed.

This is the central tenet of Pinnock's latest book, Gang Town: a searing, methodical study of the gang crisis in Cape Town, distilling 36 years of research, and forays into the ghettoes and shacklands of places such as Mitchells Plain, Lavender Hill and Khayelitsha, in a bid to make sense of one of the world's most dangerous places.

Pinnock's interest in gangs was piqued when he moved to Cape Town in the 1980s.

Living in Long Street, he would find kids sleeping in the street. They would tell him they'd been thrown out by their families – just some of the flotsam and jetsam of the catastrophic social engineering that was the eradication of about 60 000 souls from what was District Six, to new homes on the sandy, windswept and far-flung Cape Flats.

Pinnock, who had been a journalist on The World in Joburg and would become one on the Cape Argus, was about to start his Master's degree at the University of Cape Town.

These kids sparked his interest in the destruction of family structures, and the filling of this void by gangs.

Pinnock's career took him to Rhodes University in Grahamstown, where he did a PhD on Ruth First and ended up running the department of journalism, before leaving to enter journalism again as a photographer and as editor of Getaway magazine. He's also a lifelong social activist, from his days in Cape Town and the Eastern Cape, in the struggle against apartheid. Today, he works with marginalised youth – particularly those ensnared in gangs.

His original plan was to bring his two previous books on gangs and gang mythology up to date; but instead, he ended up revisiting some of his original hypotheses – and totally overhauling them. Chief among them was his study of the still relatively unheralded science of epigenetics, the body's ability to develop structures in utero and shortly after birth to enable it to survive in a hostile environment.

His thesis is that the embryo is formed by three distinct information systems: the father's DNA, the mother's DNA, and the environment in which the baby finds itself, both before and after birth – particularly when the mother is living in a high-stress and dangerous environment, probably taking drugs, not getting enough to eat or enough sleep. The end result, he believes, is a child growing up with a predisposition towards danger, drugs and gangs.

“The brain is saying 'build more dopamine, the high-stress stuff, be alert to danger, boost the warrior gene',” says Pinnock.

It's a thesis, he says, that “collapses the dichotomy between nature and nurture” – and, he grins, “puts a lot of strain on Darwinism”.

“At the heart of the gang problem there might be a health problem,” he says, “a higher propensity for risk-taking, using drugs, being violent.”

The problem is exacerbated by the fact that most of the children are growing up in fatherless homes, which leads boys in particular to carry a sense of shame with them into adolescence. “They wonder, 'What did I do to make my father leave me?'“

This father-love to which they aspire is often found in gangs, where they act out their impulses even more violently to gain the approval of the gang leaders who fulfil that fatherly role.

Their drug use too, Pinnock argues, is not purely addictive; but rather, driven by the quest for a “chemical hug”, a temporary and fleeting replacement for the emotional attachment they've always craved, but never received.

Drug use, he says, is driven by the user's innate sadness. 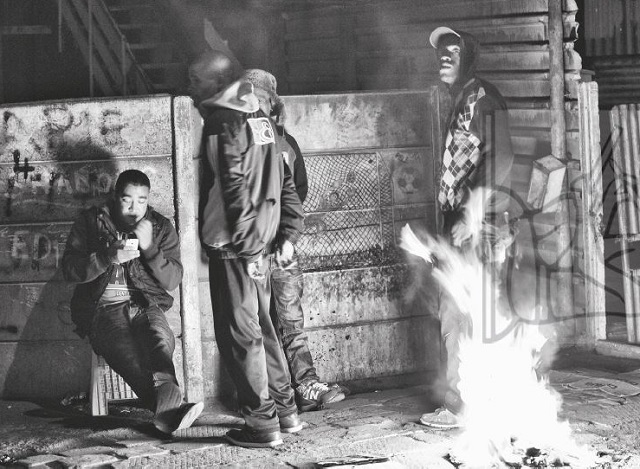 His studies this time took him from the gangs themselves to a deeper study of adolescence and delinquency, given that most of the gang members were school drop-outs from broken families.

Delinquency, he found, was a natural state of all adolescent progression through to adulthood; indeed, the absence of it in an individual is actually the aberration, not the other way around.

The difference lies in the duration of the delinquency, and its scope. Youths who grow up in relatively stable family units, where grandparents take on the parenting roles of extended families, and where they are loved, could turn out very differently to the kids next door; even graduate from university, while others are shot in the street as teens.

And to make matters worse, the entire system is designed to perpetuate the cycle.

Pinnock reels off the statistics: a third of all Cape Town children are cared for by a single parent; a million of them won't know their dads; a quarter of all children under the age of 18 have a parent or sibling who has been jailed; 15 percent of the same sample live in a household where someone is in a gang. The same number of homes have no working adult.

Don't get him started on education.

“(Some) 317 331 kids on the streets won't get to matric – and that's just in Cape Town. They're seeing fathers who didn't get anywhere. They're seeing kids who got matric not getting anywhere.”

All of this serves to push youth into gangs, where there is an outlet for their energies, and rituals that give them acceptance, status and respect.

“Older societies accept the fact that all teenagers cause shit. They recognise this, and take the rite of passage from adolescence to adulthood through processes such as initiation schools, creating responsible adults for re-admission to society. On the Cape Flats, it's the gangs that do this.”

Cape Town, says Pinnock, has a youth problem of which gangs are a natural consequence, not the other way around.

His book also has solutions. Some of them are controversial; others, plain common sense. Like rethinking crime and punishment, instead of sending delinquents to prison to emerge as proper, hardened criminals; rethinking education towards actually creating young adults who are employable – particularly those who do get sentenced to jail; bringing back community nurses to do home visits to help young mothers raise their babies properly, particularly in the first few months after birth.

Pinnock's more controversial call is for the decriminalisation of drugs, something he claims the Western Cape Deputy SAPS commissioner, General Jeremy Vearey, supports. He cites the success of Portugal in this regard, where levels of addiction were dramatically reduced and the market for illegal drugs eradicated, freeing police resources to pursue serious crime, while treating drug addiction as a health issue, not a justice issue.

Pinnock is passionate about his quest. He serves as a trustee to the Chrysalis Academy, and is a founder of the Usiko Trust for fatherless youths who have ended up in gangs.

Breaking the lure of the streets can only be achieved, he says, by giving young men back their identities and sense of self-worth.

But gangs aren't our biggest problem – it's the all-pervasive, incredibly high levels of violence.

Pinnock found that gangs are only responsible for about 11 percent of the murders in Cape Town; the balance are alcohol-fuelled incidents of domestic violence.

If there is no intervention – if the cycle isn't broken – it can only get worse, as thousands of youths flock to the cities every year in the hope of a better life that continues to elude them.

It's a time bomb that threatens the entire country.