Agnes Mbonyiryivuze and Greg Jackson represent the developing generation of leading scientists and researchers in physics. When they attend the 66th Lindau Nobel Laureate Meeting in June, they will become part of a network of excellence and ambassadors of the scientific dialogue that is fostered at these annual gatherings.

The Lindau Nobel Laureate meetings began in 1951 as a valuable opportunity for young scientists to meet Nobel Laureates in order to seek their advice, to exchange thoughts and views and to discuss current developments in science and beyond.

This year's meeting is dedicated to the field of physics. The opportunity to join the annual gathering of Nobel Laureates is provided exclusively to outstanding young scientists under the age of 35.

Mbonyiryivuze has had a strong interest in science since her high school days and she now holds a BSc(Hons) in physics with education, and qualified teacher status, from the University of Rwanda College of Education and an MSc in physics from UNISA. Her aim in the physics field is to become a pioneer who will make a difference.

“As a woman, I am interested in physics to motivate other women to go for sciences as they were taken as male subjects,” says Mbonyiryivuze.

Under the supervision of Professor Andy Buffler, Mbonyiryivuze is currently completing her PhD on “developing students'” understanding of spectroscopic data in the senior physics teaching laboratory.

“My PhD has been a great learning experience so far. The thing about research that I love the most is the freedom and opportunity I get to learn new things every day,” she says.

She hopes her research will contribute to the transformation of science teaching, especially physics, from low secondary to tertiary level, as there is an imperative need to demonstrate and facilitate the teaching and learning process.

Due to the under representation of women in sciences, Mbonyiryivuze plans to continue with her academic career after completing her PhD. “Communities can create an environment of encouragement that can disrupt negative stereotypes about women's capacity in these demanding fields,” she says. “There is a need for women in sciences. … We must be role models for other women.” 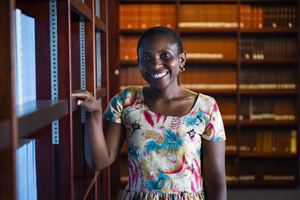 Mbonyiryivuze believes that supporting the development of girls' confidence in their ability to learn maths and science will motivate their interest in these fields. “Women's educational progress should be celebrated, but more work is needed to ensure that women and girls have full access to educational and employment opportunities in science, technology, engineering and mathematics,” she says.

“I am very excited about meeting Nobel Laureates in person. … There will be many exciting discussions about science. I hope to learn about all the awesome research happening in the world, to make friends and bring memories that I will cherish all my life,” says Mbonyiryivuze.

Her key to success has been hard work and dedication. “Don't let anyone intimidate or discourage you from doing science or physics. By having self-confidence and working hard you achieve anything,” she says. 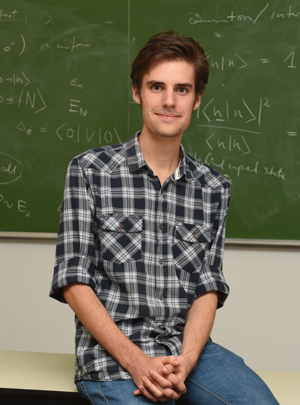 Jackson is currently completing the second year of his master's in the UCT Physics Department under the supervision of Professor André Peshier.

“My present focus is on quantum chromodynamics at high temperatures, where the degrees of freedom are expected to reflect that of a plasma state,” explains Jackson. “This phase of matter is relevant for the early universe (up to a few microseconds) and has been recreated in experiments such as the Relativistic Heavy Ion Collider and Large Hadron Collider.”

His research choice dates back to his school interest in maths Olympiads. Jackson, who enjoys solving problems and puzzles, came to UCT with the intention of pursuing pure maths.

“I had hoped I'd get into UCT because from doing maths Olympiads at school I'd already developed relationships in the UCT maths circle, which is a weekly class where you can come learn things that aren't part of the school syllabus,” he explains. “When I came to UCT … I discovered physics on the way and gained interest and ended up where I am now.”

Greg applied for the Nobel Laureates Meeting after his supervisor recommended it.

“The 66th Lindau meeting is a fantastic opportunity for me, not only for exposure to a very broad range of physics topics, but also to meet new people and exchange ideas,” says Jackson.

He looks forward to meeting experts in his field, like David Gross – one of the pioneers of the strong nuclear force. “It would be really nice if I could chat to him. I'm also quite excited because the topics are going to be broad – it's not just focused on my area of physics,” says Jackson.

Although still undecided about pursuing an academic career after completing his master's, he would like to pursue a PhD. “It's another challenge I'm up to,” says Jackson. “I'm sure the Lindau opportunity will make a big impact in that regard.”

Jackson's key to success has been learning from others. “Ask questions,” he says. “It's one of the most important things in science – you don't learn by taking for granted what's in the book, you have to question almost everything.”

* OWSD was founded in 1987 and is the first international forum to unite women scientists from the developing and developed worlds with the objective of strengthening their role in the development process and promoting their representation in scientific and technological leadership.