The 18h00 ceremony on 19 December, the largest of the three bumper ceremonies, closed an abridged graduation season at UCT following nationwide university shutdowns and the postponements of exams.

It was nonetheless a grand celebration for the 522 graduates from the faculties of humanities (postgraduate candidates), health sciences and engineering & the built environment.

Some 1 424 degrees and diplomas were conferred at the three ceremonies. A record number of PhD and postgraduate degree were awarded, including 136 PhDs, underscoring the university's drive to be led by research – particular research that is driven by community engagement and meeting society's needs in South Africa and Africa.

At the ceremony Professor Keertan Dheda (Division of Pulmonology) was honoured as one of six new UCT Fellows this year. This prestigious honour places him among the university's senior academics that have been acknowledged for their distinguished academic work.

Dheda was lauded for his work in the field of multi drug-resistant respiratory infections, including tuberculosis. His work has enabled more rapid diagnosis of drug-resistant TB and voids redundant and expensive drugs. 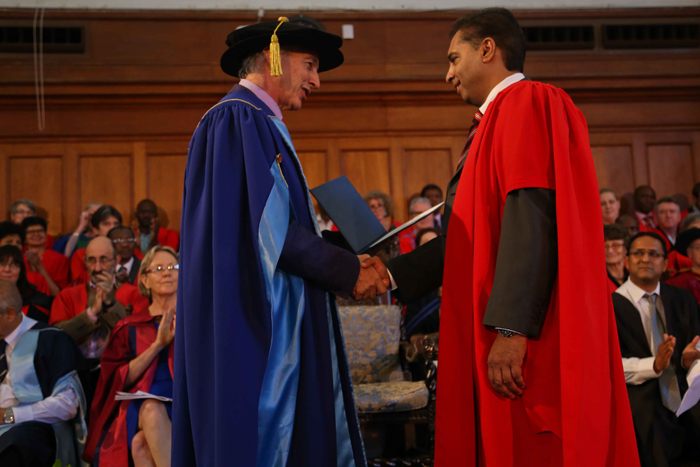 Distinguished researcher: Prof Keertan Dheda (Division of Pulmonology) was honoured as one of six new UCT Fellows this year.

The occasion also signalled the end of another chapter and the opening of a new one when Hugh Amoore, who has served UCT for 42 years, including 29 as registrar, attended his last ceremony – this time as guest speaker. Amoore is UCT's longest-serving registrar.

Referred to by the master of ceremonies and deputy vice-chancellor Professor Francis Petersen as “the keeper of institutional knowledge”, Amoore hands the baton to Royston Pillay at the end of the month and will then take on the title of registrar emeritus.

It was a bittersweet occasion for Amoore, an alumnus whose relationship with UCT began as an English literature and applied mathematics undergraduate in 1970.

Amoore is the author of the dedication, traditionally read by a member of the Students' Representative Council before the formal proceedings of the ceremony begin – and he revisited its guiding content and values in his address.

In congratulating the graduands on their rite of passage, Amoore reminded them of the value of free enquiry performed in a spirit of freedom and responsibility. One of the enduring values of UCT, he said, is being receptive to new ideas.

“This, it seems to me, is a non-negotiable if we are to remain a university.”

He referred to one of the morning's honorary graduates who had stressed how a “critically literate citizenry [is] indispensable to a democratic society; competent to explore and interrogate the assumptions behind the paradigms of national and economic life…”.

Amoore also reminded graduands of another of the dedication's imperatives: the mission to address society's challenges.

“At the risk of being trite, these include: the decay of the one planet we have, poverty and inequality, alienation from the prevailing unjust social and political order, and a body politic that reeks with the stench of corruption and maladministration.

“It is tempting to give up … and to carry on as if there is nothing to do. That option is not open to a university and certainly not open to UCT.”

Referring to the record number of PhDs being awarded, Amoore said these were the tip of the iceberg of the “too often hidden work done by members of this university in attempting to address these challenges”.

Another of the dedication's challenges is the creation of objective criteria to ensure the foundation of high standards, and raising those standards to encourage a culture of excellence. The record numbers of PhDs and postgraduates degrees were the outcome of this striving for excellence.

And then, at the culmination of a year of protests when the foundations of the university had been shaken, Amoore addressed benefaction and the source and legacy of that benefaction, which the university sorely needs with its “limited means and many ends”.

“This hall [Jameson Hall] was the focal point of the architectural centrepiece conceived by the university's young architect in the 1920s but by the 1930s, after he had ended his life, the Great Depression settled on the country.”

Amoore said the friends of Jameson, who'd been premier of the Cape for four years and who'd died in England in 1917, had committed to raising the money needed, but could collect only one third for the assembly hall. The dome that was to have been its crowning jewel fell away.

Although the objective of UCT's predecessor, the South African College, was to be fully South African and equal to the best in the world, the university was alienating to the many Afrikaans students at the time. With its predominantly English culture and a campus that commemorated Rhodes and Jameson in a very concrete way, Afrikaners felt like strangers at the university.

“With that lesson from history, we should not have been surprised by the avalanche of support garnered by the Rhodes Must Fall campaign in 2015.

“For the UCT student of 2015, Rhodes was not merely anti-Afrikaner and British imperialist, but the personification of a racial capital that lead to the subjugation of the majority of South Africans.

“It is part of our history that the friends of Jameson raised the funds for this assembly hall … The Afrikaans-speaking students of the 1930s had to accept daily reminders of the British imperial project.

He said that, for the staff and students of 2015 and 2016, it would be important “that we ... accept and celebrate the fact that the university we love will be a better place when this hall has a new name.”

As to Rhodes as benefactor, Amoore said that perhaps the way to view his legacy would be by a way of reparation.

“We may need to redouble our efforts to ensure access to UCT for those who cannot afford to pay tuition, housing and other costs. For UCT to do this we require increased benefaction. That seems to me to be reason enough to celebrate benefactors of the past, present and future.”

Story by Helen Swingler. Photos by Je'nine May.