In order to understand the impacts of climate change, such as rising sea levels, researchers need to be able to measure it within a consistent geocentric global terrestrial reference frame. The origin of the coordinate system is the centre of the earth – which changes as well, and must be accounted for when all measurements refer to this frame. That is, we must be able to establish where the earth's centre of gravity is at any time. But how does one go about taking measurements on a global scale? One answer is to take measurements from space, through the discipline of space geodesy, which uses data from satellites to measure and understand the earth's changing shape, gravity field, the location of the earth's centre of mass, and rotational motion.

It was in order to set up Africa's first space geodesy analysis centre at UCT that Dr Ramesh Govind moved from Australia back to his home country, South Africa, almost three years ago.

“Space geodesy makes use of a number of different techniques, but at the very core of any kind of spatial measurement of the earth – any kind of measurement where co-ordinates are required – is the International Terrestrial Reference Frame (ITRF), which has the centre of the mass of the earth as its origin,” explains Govind, senior lecturer in the Division of Geomatics, who also assists in UCT's multidisciplinary platform, the Space Lab.

The challenge is that the earth is constantly changing shape; thus, the co-ordinates and spatial points on the earth's surface that are used to map the terrestrial reference frame undergo changes over time. “Every year the ITRF is updated, as new observations and improved modelling come in – as we grow to understand the mathematics and physics better,” explains Govind.

This reference frame is then used as the basic measurement for all changes of the earth, including rising sea levels, melting of the ice caps, and other environmental changes that may impact the earth's ecosystems. 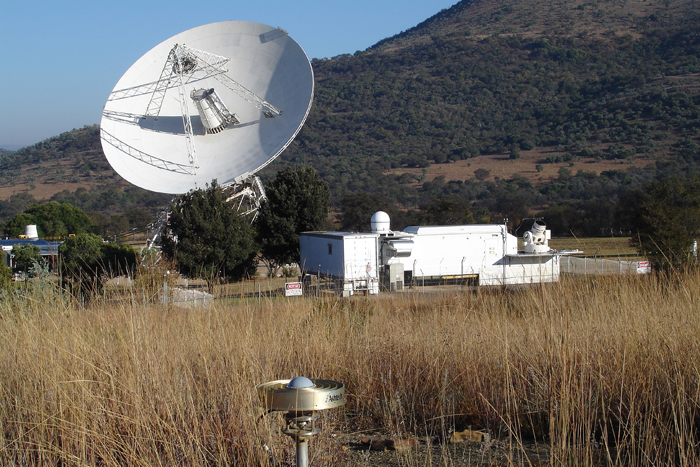 The tracking systems used by Dr Ramesh Govind and his team to measure the earth's changes: the small antenna in the foreground is the continuously operating GNSS system, the large dish (on the left) is the VLBI antenna, and the building and telescope (on the right) comprise the satellite laser ranging system.

There are a number of different space techniques used to measure the earth's changes, including Satellite Laser Ranging (SLR), the DORIS (Doppler Orbitography and Radiopositioning Integrated by Satellite) system, Global Navigation Satellite Systems (GNSS) and the Very Long Baseline Interferometry (VLBI) system, among others. According to Govind, this multi-technique approach to measuring global change is critical, as it means we can verify and validate findings: in other words, the various techniques of measurement should lead to the same answer.

The data is collected through a number of stations around the world, including the Hartebeesthoek Radio Astronomy Observatory (HartRAO), in which these four space geodesy measurement techniques are co-located. But prior to Govind's arrival, nobody in South Africa was participating in the analysis of space geodesy data being produced in South Africa. 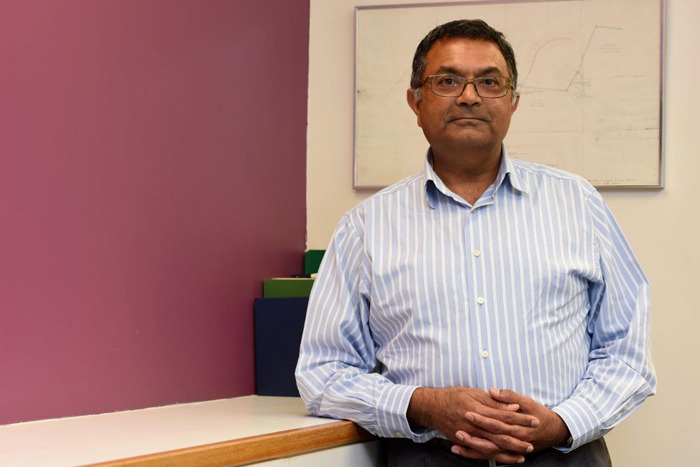 Having left South Africa to go into exile, Dr Ramesh Govind returned to his home country after 31 years in order to build capacity in space geodesy.

After a total of 31 years out of the country, which included a stint in Japan, Govind returned to South Africa. He is passionate about bringing his skills and experience to his home country, to build capacity here: “I really wanted to contribute to the establishment of this kind of analysis in Africa,” he says. “I work closely with a number of organisations locally – including HartRAO, the National Geospatial Information, and the South African National Space Agency – to share facilities and knowledge.” Internationally, he works closely with the National Aeronautics and Space Administration (NASA) and several similar agencies in Europe and North America that participate and contribute to the international services for SLR, DORIS, GNSS and VLBI through their respective Analysis Working Groups.

“This kind of work results in an enormous volume of data,” says Govind. He notes that one of his saving graces when he got to UCT was the high-performance computing (HPC) team, located within UCT eResearch. “I often have to compute a few decades of satellite data at one time from a global network of tracking stations, which is impossible without HPC facilities.”

His goal is to build a community in South Africa who can actively contribute to the field at a global level. An important part of that, he explains, is the development of the African Reference Frame (AFREF). “As well as the ITRF, the world is divided into a number of regional reference frames, all of which contribute to the ITRF,” says Govind. “In Africa we have only a sparse network of these space stations, but there has been progress towards developing AFREF in a similar way to the European and Asia-Pacific reference frames.”

Govind is working with the National Geospatial Information, located in Mowbray, Cape Town, to help develop that. Thanks to his work, UCT is presently leading the development of AFREF, which will be an important contribution to the study of global and climate change in Africa.