A severed head with amputated hands, believed to be 9 000 years old, has been found buried in Brazil. It suggests that ritualised decapitation is much older and more widespread than we thought.

Few Amerindian habits impressed the European colonisers more than the taking and displaying of human body parts, especially where decapitation was involved. Although disputed by some authors, it has become widely accepted that decapitation was common among Native Americans across the entire continent, and the archaeological evidence confirms that the practice has deep chronological roots. 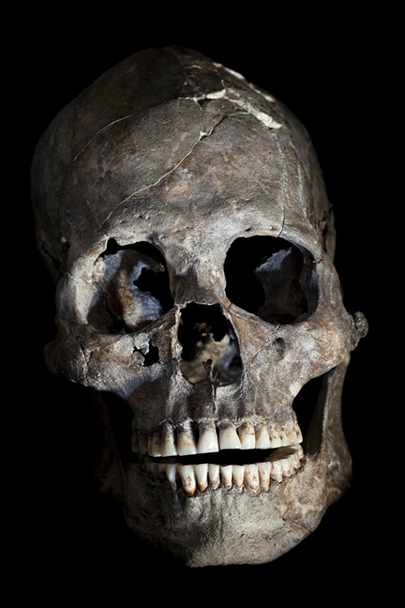 The severed head from Burial 26.

Until now, the oldest decapitation in South America – dating to around 3 000 years before the present – was reported for the Andean region, at the site of Asia 1, Peru. Since all other South American archaeological cases occur in the Andes (e.g. Inca, Nazca, Moche, Wari, and Tiwanaco), it was assumed that decapitation was an Andean phenomenon.

But an international study, led by André Strauss from the Max Planck Institute for Evolutionary Anthropology in Germany, with Dr Domingo Carlos Salazar García from the Department of Archaeology of the University of Cape Town, has challenged this traditional view. This study, published in PLOS ONE, reveals a 9 000-year-old case of human decapitation found in the rock shelter of Lapa do Santo in Brazil.

The archaeological site Lapa do Santo, in east-central Brazil, contains evidence of human occupation dating back to around 12 000 years ago – it is one of many rock shelters known to have been used by some of the earliest known inhabitants of South America. In 2007, researchers at the site found fragments of a buried body, Burial 26, including a cranium, jaw, the first six cervical vertebrae, and two severed hands. They dated the remains to around 9 000 years ago, using accelerator mass spectrometry.

A schematic representation of Burial 26 at Lapa do Santo, the archaeological site where the remains were found.

Although the Western perspective has always understood decapitation in the context of inter-group violence and punishment, the archaeological and ethnographic record points to a more complex scenario in the New World. “The strontium analysis comparing Burial 26's isotopic signature to other specimens from Lapa do Santo suggests Burial 26 was probably a local member of the group, and not a defeated foreign enemy,” says Salazar-Garcia, who was in charge of the isotopic studies.

The presentation of the remains leads the authors to think that they are most probably the results of a ritualised decapitation, rather than trophy-taking. If this is so, these remains may contribute significantly to our knowledge of mortuary rituals.

“This ritualised case of decapitation from Lapa do Santo attests to the early sophistication of mortuary rituals among hunter-gatherers in the Americas,” says Strauss. “The absence of a punitive element provides a venue for the exercise of a radical notion of alterity [or 'otherness']. In the apparent absence of wealth goods or elaborate architecture, Lagoa Santa's inhabitants seem to have been using the human body to reify and express their cosmological principles."

The authors think this may be the oldest case of decapitation found in the New Word, which will lead to a re-evaluation of the previous interpretations of this practice, particularly with regard to its origins and geographic dispersion.