A team from the University of Cape Town's Industrial Computational Fluid Dynamics (CFD) Research Group has successfully broken the longstanding Class A water rocket world altitude record by a massive 33%, achieving a height of 830m.

“It is the first world record in rocketry set by a South African university that I am aware of,” says Professor Arnaud Malan, Department of Science and Technology South African Research Chair in Industrial Computational Fluid Dynamics, who led the research group. He adds that it is “and definitely the first appearance South Africa has made on the international water rocket scene.”

The record was formally ratified on 7 October 2015 after international peer review by the Water Rocket Achievement World Record Association. The previous record of 623m, set in 2007 by US Water Rockets, has had no equal for eight years.

Says Malan: “The water rocket competition is very exciting, as it uses only water and air – very environmentally friendly – to reach incredible speeds.

“The competition is truly multidisciplinary in nature, and requires pushing the boundaries of state-of-the-art technology in areas ranging from mechanical design and lean manufacture to computer-based mathematical modelling. It is like the Olympics of water rocketry and pits us against the best and brightest in the world. Clearly, we are now the undisputed best of the best.”

Water rocketry is a popular hobby and provides a very challenging postgraduate training platform, says Malan. The technologies it requires have several applications, including ultra-light pressure vessels for transport, catapulting cabling and ropes for construction and even novel thrusters for space applications.

As with most academic (rather than commercial) projects, this was done on a shoestring budget: the rocket was built from off the-shelf-components and using standard tooling.

The result was a featherweight record-breaking rocket that is 2.68m tall yet weighs less than 1.5kg, including a flight computer, on-board camera, parachute and parachute deployment system. The rocket produced 550kg of thrust – enough to lift a small car off the ground – and blasted off to 550km/h in under 0.5 seconds (at this speed, it could cross a rugby field in three-quarters of a second). In addition to computer-based modelling, the team made extensive and creative use of carbon fibre materials, due to their amazing strength.

The record was the end of a long journey for the research group – driven by Stuart Swan and Malan, with assistance from Donovan Changfoot, William Liw Tat Man, all based at UCT's Department of Mechanical Engineering. The successful ascent came after two failed attempts and numerous innovations and refinements, in a process that tested the team's perseverance.

The first attempt – in November 2013 – failed because the carbon-fibre rocket vessel was leaking air severely, which would nullify any world record attempt. To resolve this, the team devised a creative and cost-effective sealing solution (for which a patent is currently being applied).

A second world record attempt, which sported a significantly improved launch pad – important for the large forces expected – was aborted when the rocket failed to lift off. A number of key innovations, ranging from pressure-vessel manufacture to a radical fail-safe parachute deployment system, led to the development of Ascension III.

On 26 August 2015, the team headed out to Elandsberg Farms in the Western Cape. Ascension ΙΙΙ was ready for its maiden flight at 9:37am. The first flight achieved a height of 835m – 217m higher than the current record. To secure the world record, a second launch had to be completed within two hours of the first. With 10 minutes to spare the second launch took place and reached an altitude of 825m, setting a new world record of 830m. 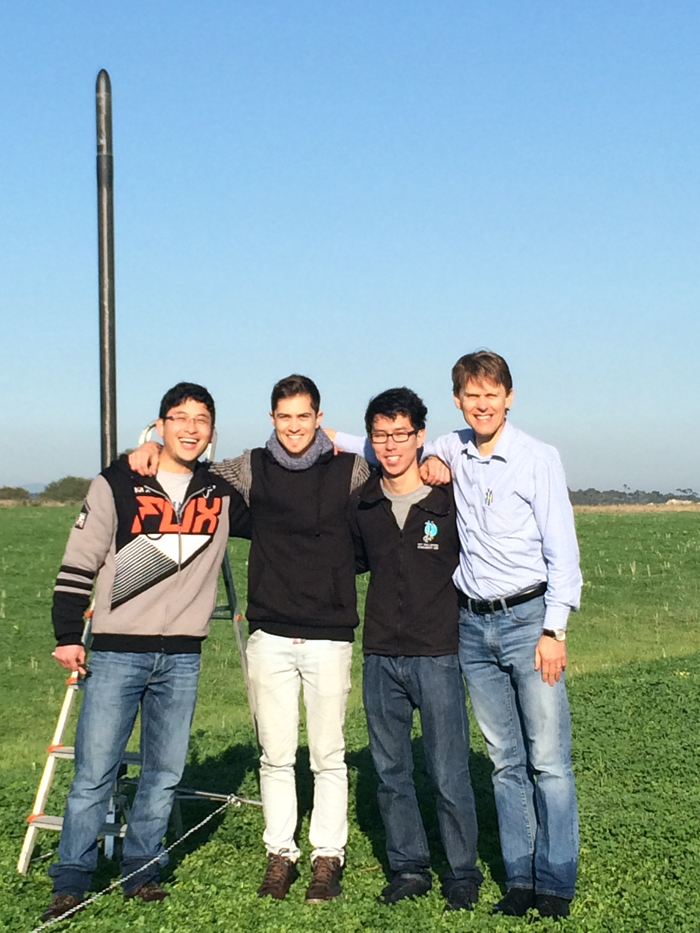