What South African farmers can do to protect endangered grassland birds

Current livestock farming practices in South Africa threaten endangered birds. South Africa is not unique. Globally, the intensification and expansion of agriculture has led to the reduction of bird communities.

These farming practices centre around the annual burning of grasslands, which are one of the most diverse ecosystems in South Africa. They support 12 of the 40 endemic birds, five of which are globally threatened.

South Africa's grasslands host five RAMSAR wetland sites. RAMSAR is the convention on wetlands. It is an intergovernmental treaty that provides the framework for national action and international co-operation for the conservation and wise use of wetlands and their resources.

These grasslands, including the wetlands, comprise around 16.5% of South Africa's land surface. They are one of the most threatened ecosystems. More than 60% of the grasslands have been irreversibly transformed by agricultural cultivation and forestry and only 2.8% are formally protected.

Moist highland grasslands in South Africa, of which only 1.5% are conserved, were historically maintained by winter and spring fires. This was probably done at intervals of four years or more, and by summer grazing by migratory, medium-sized antelope.

Today these grasslands are managed by livestock farmers, who in most areas burn annually at the start of the rainy season, in early summer. This coincides with the onset of the breeding season for birds. The two major drivers of grassland disturbance, fire and grazing, have therefore been altered dramatically.

All is not lost. Changes to agricultural practices can provide surrogate habitats for certain bird species without compromising the economics of livestock farming. 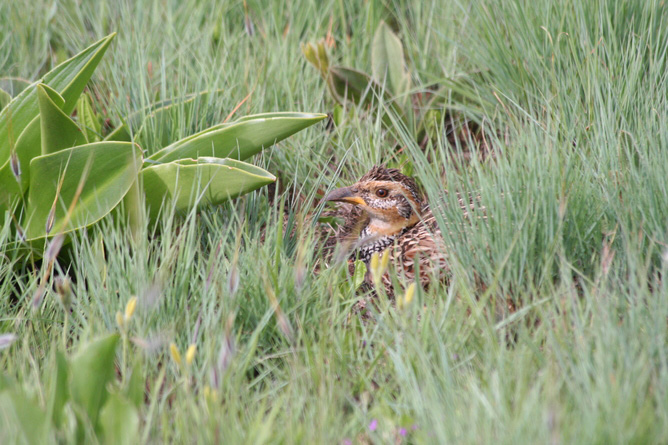 Red-winged Francolins can be completely removed from grasslands by annual burning and heavy grazing. (Photo by Ian Little.)

The effects of fire

Research set out to understand how fire and grazing interact to influence communities of plants, invertebrates and ultimately birds.

The project included a nature reserve, various farming practices and communal lands that lack a managed fire regime. In terms of vegetation quality, burn frequency has an overriding effect. Both plant species diversity and vegetation structure are negatively impacted by annual burning. Also, a combination of frequent fires and heavy grazing can result in a low, lawn-like sward.

Communal lands look much the same, even though fires are not managed, simply because grazing pressure is so high. Frequent burning also affects the diversity of invertebrates, with diversity being lowest in annually burned areas. However, in terms of food for birds, the pattern is somewhat different.

Grasshoppers, which are the favoured food for many insectivorous birds, dominate the invertebrate fauna. They also respond positively to burning, and are most abundant at sites that have been burned in early summer, reaching peak abundance towards late summer.

The conundrum for birds

The different responses of vegetation and invertebrates to management practices create a conundrum for birds. Food is most abundant in areas burned in that breeding season, yet the short grass sward provides little concealment for nests. Most birds who feed in these areas nest there as well.

Following more than 400 nests of grassland birds, we found that nest-site selection and nest success are driven by vegetation structure, which itself is driven by management. For birds that build cup nests on the ground, nest success rates increase through the season. This is because predation rates fall as vegetation grows.

Incorporating plant, insect and bird diversity data in analyses, we confirmed the importance of conserved areas for birds in moist highland grasslands.

We can further confirm that the increasingly popular use of "holistic" grazing practices in intact high altitude grassland systems has a significant detrimental effect on all grassland biodiversity.