Who is Boko Haram?

How does a fringe Islamist insurgent group, scorned by most Nigerians and controlling an area half the size of KwaZulu-Natal, manage to sow terror among a 170-million strong population? UCT religious studies expert Dr Andrea Brigaglia tackled such perplexing questions in an 8 June lecture. Here are some of his key points.

Not everyone is aware that the name Boko Haram is actually taken from the Hausa language, widely spoken in Nigeria, and an expression of the disdain in which the group is held in large parts of the country.

The group's official designation is Ahl al-Sunna li'l-Da'wa wa'l-Jihad 'ala Minhaj al-Salaf (Arabic for the 'Association of the People of the Sunna for the Missionary Call and the Armed Struggle, according to the method of Salaf'). AS DJ, as the name is sometimes contracted, was spawned when Mohammed Yusuf, a Salafi activist, issued a fatwa (or edict) in 2002.

He declared it impermissible (haram) for Muslims to attend public school (boko) or to work for the government. This led to Nigerian Muslims mockingly dubbing the group Boko Haram. 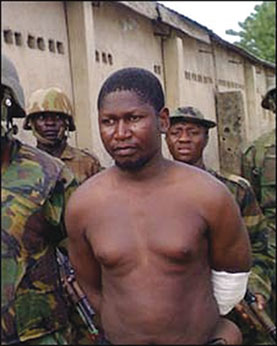 Mohammed Yusuf, founder of Boko Haram, was snapped by an onlooker moments before his public execution by Nigerian police in 2009.

From its beginning as a nickname to satirise a movement which Muslims perceived to be a fringe and insignificant voice in the public arena of Islam in the country, he added, it was taken up in a complex way in the non-Muslim Nigerian public arena as a symbol of what Islam stood for.

This (mis)appropriation of the name Boko Haram served to reinforce notions of Islam being 'backward' in some sectors of the Nigerian public, said Brigaglia.

The real genesis of Boko Haram

Boko Haram appeared between 2002 and 2009 as a fringe Islamist movement in Borno State in Nigeria. It was part of a broader network of Islamist movements, and broke off from a mainstream Salafi sect in 2002.

"We use the term 'Islamist' as a synonym for 'political Islam', those movements that are making statements in the public sphere for an increased application of Islamic law and increasing participation of Islamic movements in politics," Brigaglia explained.

Brigaglia said he preferred the term 'phenomenon' to 'movement', because the group's evolution was so riddled with inconsistencies and counter-narratives that scholars were struggling to pin down a linear creation story.

Between 2002 and 2004, Muhammad Yusuf broke away from mainstream Salafi leadership and declared it impossible to have Shari'ah courts in a non-Islamic state. "It is here that we have the real genesis of what we call Boko Haram as an independent movement," Brigaglia said.

Boko Haram had been involved in sporadic shoot-outs with police, and attacked beer parlours and brothels after 2002; but 2007 witnessed their first real high-profile action. This was the murder of the most popular Islamist leader in Nigeria, Ja'afar Mahmud Adam, during morning prayers, after he had spoken at length against the fatwa around schools and government work and questioned its motives and backing. It was now widely accepted that Mohammed Yusuf ordered the murder to be carried out, by a machine-gun-toting commando.

"It really shocked the Nigerian public," said Brigaglia, explaining that this was the first time a religious leader had been killed in a mosque while leading prayer. 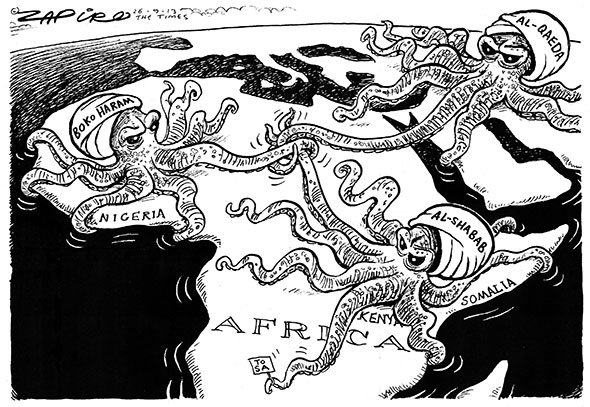 Boko Haram was crushed by the Nigerian state during 2009's Operation Flush, under then-president Umaru Musa Yar'Adua. Not only was the movement forced into operating as underground militias, but its leader, Mohammed Yusuf, was executed – not in fighting, but in police custody; as was his close ally, Alhaji Buji Foi.

"Why? Was there am attempt to silence him because he had information about what was behind the genesis of his movement?" Brigaglia asked. "It's a question Nigerians have been asking since 2009." In 2010, Boko Haram reappeared, this time as a terrorist network with a modus operandi that relied heavily on bombings.

"In 2010, the supposed second-in-command of the founder of the movement now reappears with some videos in which he threatens Nigeria, which nobody takes seriously at first," Brigaglia said. "These threats realised themselves when they attacked, first, the UN headquarters, in 2010; and there were a series of attacks in 2010, including attacks on churches and others."

So by now, it was an underground network of people operating from their hide-out between the Cameroonian and Nigerian borders, from the remains of what used to be Boko Haram.

A horrific yet telling development was that most of the suicide bombers Boko Haram have used were young girls. This gruesome anomaly showed that even 12 years later, the movement was still struggling to infiltrate the psyche of its most logical 'target market': young men.

Since March 2015, Boko Haram appears to have retreated from the Sambisa Forest, one of its strongholds. 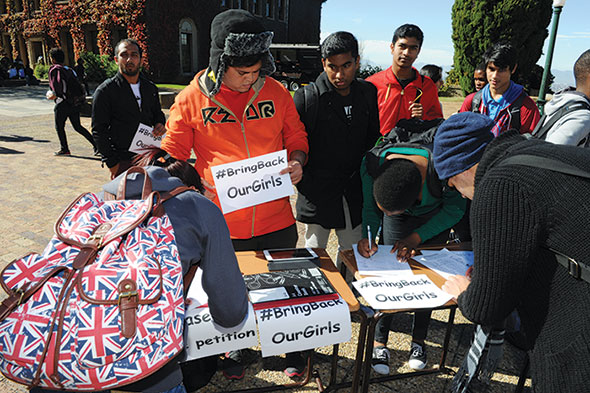 Roscoe Jacobs (black cap), a UCT student, organised a petition themed #BringBackOurGirls in May 2014, to urge the SA government to assist their Nigerian counterparts after Boko Haram kidnapped more than 200 girls from school in Chibok, north-eastern Nigeria. (Photo by Michael Hammond.)

There are myriad curiosities that raise flags about Boko Haram's place in global geopolitics, Brigaglia pointed out.

Take the question of funding, for instance. While Boko Haram's income is supplemented by ransoms from kidnapping, Brigaglia noted the "very ambiguous role" of a London-based Saudi NGO called Al-Muntada Islamic Trust.

This very wealthy organisation has played a complex and clouded role, said Brigaglia. It sponsors the very Islamist networks that Boko Haram has attacked, but there are allegations of the NGO sponsoring Boko Haram, too.

It is also curious that Boko Haram became flush with cash soon after a state of emergency was declared in the states in which it operates.

Then, in late 2013, an Australian negotiator claimed to have made direct contact with the group. His report mentioned two sources of funding: Ali Modu Sheriff, Borno State governor from 2003, and General Ihejirika, Nigeria's Chief of the Defence Staff from 2010 to 2014.

There was no concrete evidence linking these two, Brigaglia stressed, but added that Nigerians were frightened by the thought that Boko Haram might have had support from within political structures. To add a touch of paradox, Yusuf – whose original edict outlawed working for the government – had strong ties to Sheriff during his tenure as governor. So close was their relationship that Sheriff had appointed Alhaji Buji Foi as Commissioner for Religious Affairs and Water Resources.

Brigaglia noted two recent coincidences about the timing of Boko Haram's apparent retreat in 2015. One was that it preceded the Nigerian presidential elections, in which Muhammad Buhari was voted into office. It also coincided with talks between the Nigerian and Chad governments over oil, which began in August 2014.

Oil had oozed into the picture earlier, too, said Brigaglia. Shortly before Boko Haram started operating as a forest-based militia, a massive oil reserve was discovered in Borno State. This deposit was shared by neighbouring states Cameroon, Chad and Niger. This anomaly should flag the possibility of the other forces operating in the area, said Brigaglia.

Such geo-political uncertainties also arose from US AFRICOM's launch in 2006. This was a massive military operation, with the US setting up bases across the Sahel. Unlike its neighbours, Nigeria resisted advances for a US military base within its borders.

"I'm not saying that Boko Haram is a creation of foreign intelligence. I'm pointing to the idea that there is something going on geo-politically. It might be the US; it might be the US's enemies that are interested in putting their foot in the country. It's not very clear what's happening," he added.

The road to unmasking Boko Haram is potholed with discontinuities, said Brigaglia, pointing to a number of examples where conspiracy theories about the group's inner workings and relationships with local and global geopolitics. had been allowed to take root.

Because Boko Haram was such a "mysterious object", it was often difficult to dislodge these conspiracy theories from the psyche of Nigerians. The death of Abubakr Shekau, the man who assumed Boko Haram leadership after Muhammad Yusuf's death, was fertile ground for such conspiracies.

"Nigerian intelligence claimed to have killed Abubakar Shekau in August 2013," said Brigaglia, yet a man claiming to be Shekau has continued to appear on Boko Haram videos after August 2013. Yet, in the videos released before and after 2013 he seems to be portrayed by two different men.

"So, who is the leader of Boko Haram since 2013? What has been happening to the leadership of 2013? And who are the different hands that have started to manipulate [the situation]?"

When studying the genesis and evolution of Boko Haram, one is left with perplexity rather than certainty, Brigaglia concluded. "The history of Boko Haram over the last 13 years ... would suggest that the pattern here is not of radicalisation, but rather a pattern of gradual penetration in Nigeria of a very complex, multilayered set of regional and global interests."

Dr Andrea Brigaglia – who grew up in Naples – originally tried his hand at a singing career before academia beckoned. In fact, the Boko Haram lecture he delivered in June as part of UCT's Summer School Extension programme was the first time in about 20 years that people had paid to hear his voice.