Understanding and responding to xenophobic violence

At lunchtime on Thursday 23 April 2015, while Johannesburg residents marched against xenophobic violence, UCT gathered for a discussion on how to better understand, respond to and prevent this kind of violence in South Africa.

Xenophobic violence is neither spontaneous nor isolated but rather ongoing and often caused by political power struggles at the local level as much as by structural inequality such as poverty and unemployment. Until these underlying problems are solved we should expect more xenophobic violence, especially in light of the coming local elections. There is also the danger of encouraging a militaristic approach if we look solely to the police to try and contain such violence.

Understanding the causes of xenophobic violence

When looking for the reasons for xenophobic violence, we often hear about it being a reaction to poverty, housing, unemployment, service delivery issues – all of which are exacerbated by competition with foreign nationals. "One of the reasons most often cited as a cause of this violence is the perceived influx of foreign migrants," says Amit, "however, research conducted by the Migrating for Work Research Consortium (MiWORC) shows that in fact, only 4% of the South African workforce is foreign so competition for jobs is not a cause of the violence." Nonetheless, studies have shown that this perception is widespread and that xenophobic attitudes are deeply entrenched across the country.

In fact, Amit pointed to the role of power struggles at the level of local leadership as being the predominant cause of xenophobic violence: "We have found that structural causes, such as poverty, are enabling factors, but do not account for the violence alone. In many cases we have shown that violence can be linked to local power struggles. Local leaders play on already existing discontent to mobilise people to violence as a means to consolidate their own political power.

"The lack of conflict resolution measures at the local level also has a part to play (since violence often occurs only after people have become frustrated by a lack of action by local officials in resolving issues that arise within a specific community). In addition, another important contributing factor is a culture of impunity in which people do not fear the consequences of their actions." 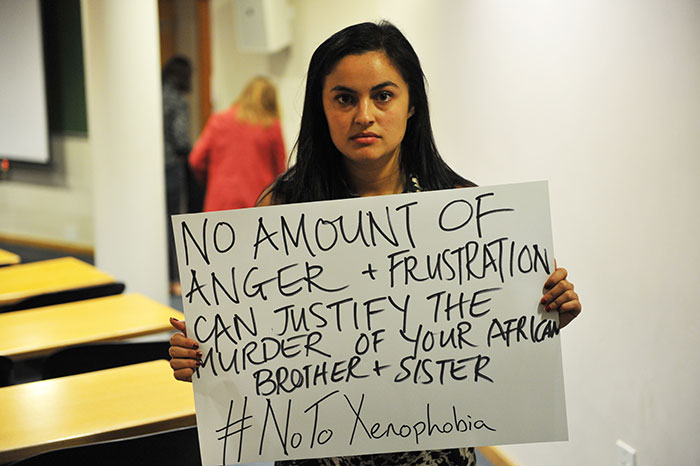 General Jeremy Vearey, the Mitchells Plain cluster commander for SAPS, agreed that xenophobic violence is organised rather than spontaneous and has its roots in socio-economic causes, but added that in many cases it is not only political power struggles fueling attacks, but also economic and criminal ones. "It was clear that the letters circulated recently in the Du Noon and Gugulethu areas that incited violence originated in local business circles in which people were concerned over the cheaper pricing of local Somalian shopkeepers."

Dr Chris Giles, a clinical psychologist with an interest in community psychology who has worked with VPUU since 2008, described VPUU's experience of xenophobic violence at that time as being overwhelmingly aimed at small business owners. He also raised concerns over the removal of victims of xenophobic violence from their communities at that time – which often led to their permanent displacement and loss of livelihood, and only served to aggravate the problem.

How can we try to prevent such violence? While socio-economic factors are the underlying cause, along with societal attitudes, Amit also pointed to the role of prosecution. In Amit's words, "We need far greater accountability at the level of local officials and better conflict resolution measures, but the problem also won't be solved until we see the identification and prosecution of the local instigators. Often it is the looters rather than those organising the violence that are arrested."

Vearey disagreed that increased prosecution would help, saying: "Prosecution doesn't work. We have arrested people in Khayelitsha who were recently distributing flyers. In 2008 we arrested conspirators in the Browns Farm area who had burned down Somalian shops but these arrests did not remove the social determinants and thus did not solve the problem."

Vearey also warned against taking what he called a securocratic approach. "We are loathe to approach this from a militaristic standpoint. In this we may differ in the Western Cape from other parts of the country. One of the dangers of defining the problem only as a security threat is that it leads to the attitude that a social problem requires a security solution. This is why people cannot see beyond arrests and crackdown to solve gangsterism and xenophobia. It is unfortunate that the default in this situation is that, where we don't have inter-departmental action between government agencies, it means that we as the police become the only or leading agent. This is not healthy." 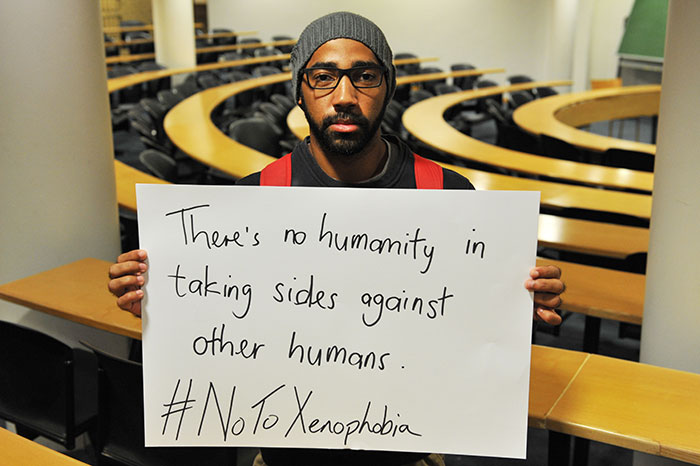 Clint Webster speaking out against xenophobic violence in South Africa.

Giles described the VPUU approach as being based on inclusionary practices such as encouraging the integration of foreign nationals on local business councils as well as supporting local neighbourhood watch groups and community-based cultural diversity festivals. "In the case of xenophobic violence, we provide economic, emotional and legal support, mediation on the ground and we endeavor wherever possible to either allow people to stay where they are or return to their homes and places of business as fast as possible."

Giles also pointed out the recommendations of the Khayelitsha Commission, mandated to investigate police inefficiency in the area, which, in Giles' words, "characterises such incidents more as vigilantism rather than xenophobic violence. The commission's suggestions included the creation of separate reporting of incidents from SAPS record keeping, not removing individuals or goods if possible, and lastly, sustained education."

How is our response to xenophobic violence evolving?

According to Amit and Vearey both the nature of the violence and the police response, while ongoing, have changed between 2008 and the present.

"In 2008 in many areas anyone who was perceived as an outsider was attacked. This often included South Africans who were recent arrivals from other parts of the country. In 2009 violence for the first time moved from informal township areas to more rural areas," said Amit. "The most recent violence has been directed more specifically at foreign nationals and, for the first time, has occurred in the CBDs of several South African cities. We have also seen the power of messages on social media and by text to create a climate of fear."

Likewise, Vearey explained that the police's approach to xenophobic violence has evolved since 2008. "At that time there was a hesitance to classify it correctly. This is important because in the police force we define crime according to certain categories, which also determines our response. We were loathe to classify it as xenophobia, and in classifying it more generically it led to a first response that immediately moved into a militarised way of responding that sought to first create stability and public order. That approach did not work and in fact the violence was only quelled when we returned to a community engagement approach in which we approached civil organisations, like the TAC, to assist through their network to first identify the instigators and victims and who then assisted us to remove victims from the areas."

Today the police's approach is different. "These days we still don't identify it as xenophobia in our security strategy but we speak about 'attacks on foreigners'. We now pre-emptively engage with political parties to ensure there is common messaging about the phenomena. We now also actively engage other civil organisations to mediate in communities before we make a show of force as a last resort."

Despite the responses to xenophobic violence having evolved over time, Amit warns that we should not expect such incidents to cease any time soon. "We need to be prepared for more xenophobic violence as we draw closer to local elections and we see more of these power struggles being played out."