Dust doesn't get a lot of attention until it makes us sneeze or collects in dark corners, or blows up in dramatic storms. However, that is beginning to change. While carbon dioxide is the main driver of climate change, scientists have begun to realise that dust also plays a crucial but highly complex role in controlling global climate ‐ as well as a number of other global scale processes, including ocean productivity, and even soil and water quality.

The role of airborne particles (collectively known as aerosols) in the atmosphere is far from straightforward: one of their most significant impacts is that they contribute directly to the cooling of the earth, as they reflect the sun's rays away from the earth. But they also play a role in heating the earth, by absorbing outgoing radiation from the earth and other objects that emit heat, which then contributes to the warming effect.

Dust also contributes to the nutrient dynamic of the oceans. Dust particles may contain iron; and when these mineral-bearing particles fall into the ocean, they can act as a fertiliser for the growth of algae or phytoplankton. As algae consume CO2 and sink to the bottom of the ocean, they take the carbon from the atmosphere with them, and reduce the total amount of harmful carbon in the air. Indirectly, iron-rich dust may therefore cause global cooling.

Dust is also a significant contributor to soil quality, as the minerals it contains are deposited into soils downwind of dust emission zones, such as the Bodele depression in Chad, or Owens Lake in California.

While scientists have identified the major global point sources around the globe, they do not yet understand what controls the dust-release process, or indeed the dust supply to these source points and regions.

The difficulties of modelling dust 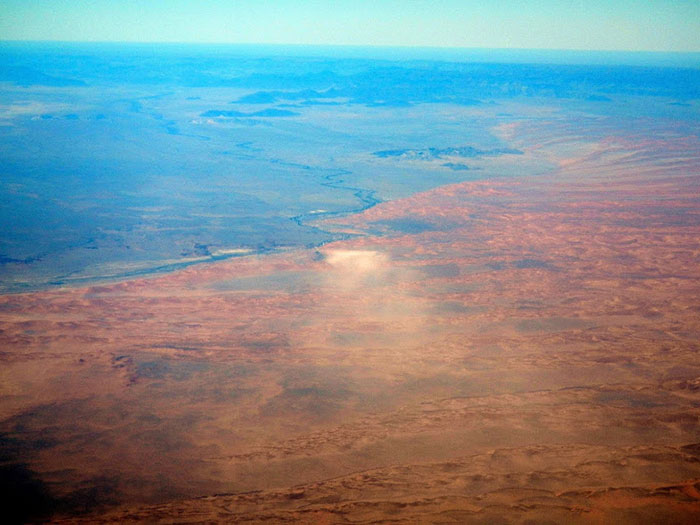 Aerial view of dust plume from Tsondab Vlei in the Namib Desert.

This has become a crucial weakness in creating numerical models, the only tools we have to predict future weather and climate. If these models do not include dust, they will be subject to significant error. But skilful simulation of the dust cycle depends on highly realistic representations of the sources of dust. Typically, however, these areas are discrete, very remote, and not systematically monitored. Until recently, measurements of African dust have been carried out at locations remote from dust source regions, such as over the Atlantic, and North America.

One important project that is aiming to rectify this lacuna in our knowledge about dust is the Dust Observation for Models Programme (DO4), a £1.5-million project funded by the Natural Environment Research Council (NERC) in the UK. It is led by Richard Washington, professor of climate science at Oxford and principle investigator of the project, in collaboration with a number of other research institutions, including UCT.

The project has been monitoring dust-emission hotspots in some of the dustiest places on earth: the Makgadikgaki Pans in Botswana, the west coast of Namibia, and the Etosha pans.

"These areas are particularly suitable," explains Dr Frank Eckardt of the Department of Geographical and Environmental Science, who is leading UCT's input into the project, "as they are typical and representative of major dust source regions and processes worldwide."

UCT's role has mainly been to identify the dust sources – how dust becomes airborne – through the use of a variety of satellite images. Of the £1.5 million, around £800 000 has been spent on the advanced technological equipment needed for the project. 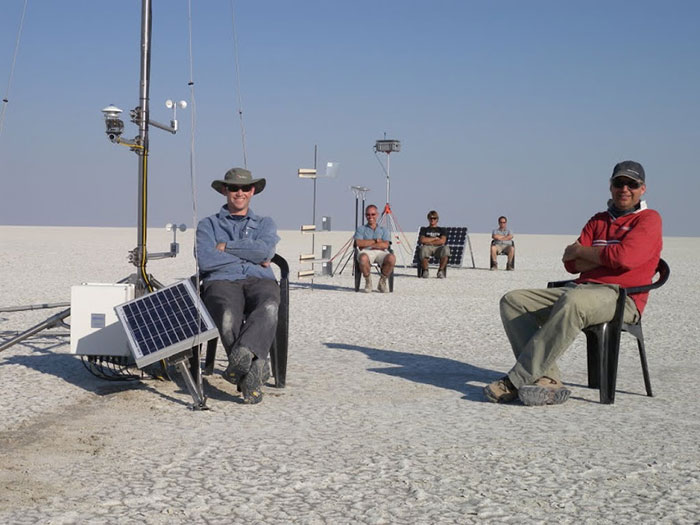 One of the eleven observation sites on the Makgadikgadi Pan in Botswana. The sampling equipment measures wind and dust as well as surface conditions and processes. From left to right: Dr James King, Prof David Thomas, Frederick Overton, Prof Giles Wiggs (all from Oxford) and Dr Frank Eckardt (UCT).

You might think the answer to how dust becomes airborne is obvious: wind. However, explains Eckardt, there are many more complex factors that play a role. "Finer and drier dust particles are more likely to be released. There are also crusts that form a kind of lid, preventing dust from escaping into the atmosphere. And sand grains can act as agitators, facilitating the release of dust."

The team therefore monitors the dust in the atmosphere, as well as potential surface controls such as moisture, roughness, crusts and sand content. "All of these, combined with strong winds, determine how much dust is released into the atmosphere," says Eckardt.

The dust in our clouds

Future projects will build on the research from the Dust Observation Project, tapping into climate questions around low-level clouds.

Low-level cloud covers about 10% of the world's oceans and acts as a mirror, reflecting energy into space; its presence or absence, therefore, has important implications for ocean temperature and climate change. Clouds form as a result of condensation, which occurs when moisture adheres to particles in the atmosphere, some of which are dust particles.

One of these projects is CLARIFY (Clouds and Radio-active Impacts), another NERC-funded UK-wide consortium between the UK Meteorological Office and the Universities of Oxford, Reading, Leeds and Manchester, and led by Washington.

This project will use the UK's instrumented BAe 146 aircraft in the south-east Atlantic to sample the low-level stratus clouds and aerosols.

The fate (and influence on regional and global climate) of aerosols (of which dust is one) is still poorly understood. This project, along with ORACLES (discussed below), seeks to study the area over the south-east Atlantic off Namibia, a prime location to study aerosol-cloud interactions, as this region hosts some of the largest aerosol optical depths on the planet. Aerosol optical thickness refers to the degree to which aerosols prevent the transmission of light by absorption or scattering of light.

Another massive project is ORACLES, funded by NASA to the tune of $30 million, which will look at the atmospheric interplay between oceans, cloud and land, monitoring dust emission hotspots. This project will also use aeroplanes to sample the clouds, including a plane with the capacity to fly at 100 000 feet (30 480 metres), which is the highest a craft can fly with wings.

Eckardt's role in both the ORACLE and CLARIFY projects will be to use his extensive knowledge to help with flight planning and identifying potential target sites, especially around dust sources.