Having your black and white photograph taken by Movie Snaps Studio in the city streets used to be a favourite pastime. The experience is now only a fond memory, and the relics are gathering dust at the bottoms of drawers. But there is a new motivation to dust off those classic black–and–whites.

From the early 1940s to the late '70s, photographers took thousands of pictures of women in shift dresses, sporting strings of pearls, and sailors boasting crisp white uniforms.

The Movie Snaps Studio was based in what is now the popular Texies fish and chips eatery building on the edge of the Grand Parade.

That experience is now only a fond memory, and the relics are gathering dust at the bottoms of drawers.

But there is a new motivation to dust off those classic black–and–whites.

Conceptualised by Siona O'Connell, senior curator at the Centre for Curating the Archive, the exhibition features installations of photographs taken during a time when freedom had to be fought for.

Although the exhibition launched at the District Six Museum's Homecoming Centre on 31 January, it runs until 28 February and can be visited from Monday to Saturday between 09h30 and 15h30.

"Once they crossed the photographer's chalk line, they were convinced to take a ticket in the hope that they would purchase the image a few days later from the kiosk," says O'Connell.

O'Connell took to social media to begin her search to find the forgotten photographs 18 months ago. Since then, she has received hundreds of pictures. 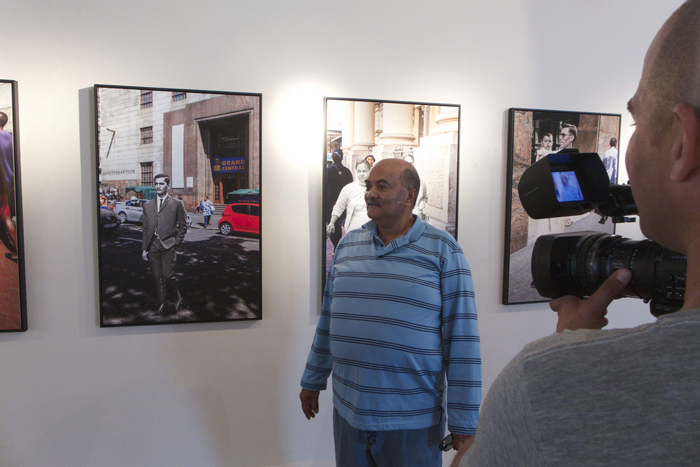 Mr Pietersen, a contributor, looks at a Movie Snaps Studio image of himself which has been superimposed onto a contemporary photograph at the original location where his photograph was taken.

O'Connell says it's the perfect time to put the photographs on display.

"These pictures illustrate moments of ordinary living in extraordinary times. They offer a counterpoint to the now–familiar narrative of apartheid's series of carefully composed images of burning tyres, mass protests and violence, and urge a consideration of the afterlives of apartheid."

The ongoing exhibition is taking place on Saturday at the District Six Homecoming Centre on Buitenkant Street.

"We are 21 years into our democracy, and racism is rife. There are many angry people, and their rage is escalating," says O'Connell.

"Showcasing these pictures, I hope, will begin the difficult discussion we need to have during life after oppression."

People who have photographs they would to like share may email O'Connell or call her at 021 480 7153. More information is available on the Centre for Curating the Archive's website.

This story has been adapted and first appeared on IOL.