Can information and communication technology improve citizens' well-being? Computer scientist and UCT doctoral fellow Omowunmi Isafiade was recently selected as one of eight sub-Saharan L'Oreal UNESCO Women in Science fellows for her work in developing a situation-recognition system to increase public safety.

Growing up in Nigeria, Omowunmi Isafiade didn't consider computer science as a career choice. "At that time it was very expensive and scarce in my home country," she explains. "Gradually, however, I realised that computer science is a field that is used in virtually every domain of life, from health to public safety to finance. Computer science steadily became my hobby, and my hope is that pursuing a degree in this field can provide me with the knowledge and skills required to bring changes to some of the challenges facing humanity." 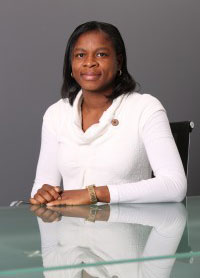 That hope was advanced when Isafiade was recently recognised as one of eight sub-Saharan L'Oreal UNESCO Women in Science fellows at an awards ceremony on 26 November 2014 in Johannesburg. The award recognises her work in improving crime data analysis so as to provide better information to public-safety authorities.

In essence, my research involves trying to improve statistical techniques used to mine crime data. For example, we were able to mine crime data and then actually highlight the locations of hotspots where crime is more prevalent," says Isafiade. Her work is also aligned with the concept of the smart city, the idea that information and communication technology can improve citizens' wellness. "I realised that safety is a key issue, because it's only when a city is safe that it can actually be smart. So now we talk about 'safe' and 'smart' cities and that is where safety comes in – my research is on the public-safety approach to the idea of the smart city."

The Women in Science awards aim to celebrate the scientific achievements of women around the world. Each year dozens of women from five geographical areas are honoured, and from these, five global laureates are chosen at an awards ceremony held in March. The L'Oreal Foundation started the awards in partnership with UNESCO, to celebrate women's scientific successes, focus attention on worthy areas of research and provide positive role models.

Isafiade agrees on the need to promote the idea of science as a relevant career choice for women. "I wouldn't have thought that five years ago I would have come this far, but because I've held onto my dreams, I keep on going with it. My advice to women interested in this field is to go for it. Pursue your dream. Be focused. And you can achieve whatever you want to achieve."

Isafiade will use the funds from the fellowship for her research and to purchase equipment – such as a laptop. "This award is so fantastic and motivating. I really look forward to using the money efficiently for my research work, and also to motivate myself in terms of how to gather information about data and get in touch with public safety authorities to get information on the state of crime."