The discovery revealed a probable mechanism for the gamma-ray emissions, which mystified astronomers when they were first observed.

"We not only found where the gamma rays came from, but also got a look at a previously-unseen scenario that may be common in other nova explosions," said Assistant Professor Laura Chomiuk of Michigan State University in the US, lead author of the paper that has just been published in Nature.

Chomiuk worked with an international team of astronomers, including Dr ValÃ©rio Ribeiro, a Square Kilometre Array (SKA) fellow at UCT's Department of Astronomy. Ribeiro played a crucial role in the interpretation of the results. He had modelled the system previously in a paper published in The Astrophysical Journal, and Chomiuk's team called on him to provide insight into his models and to see how these compared to the radio observations.

A classical nova is a single occurrence of a nuclear explosion on a white dwarf, a very dense remnant of a star. When a white dwarf orbits in close proximity to another star, its extreme gravity can pull hydrogen from the nearby star onto itself. This causes an increase in pressure and temperature that eventually triggers a thermonuclear explosion, which blows debris into space.

Astronomers did not expect this process to produce high-energy gamma rays, which are usually produced by the hottest and most energetic objects in the universe (the sun, for instance, also produces gamma rays; but right in the core, where the temperatures are extreme). However, in June 2012, the US National Aeronautics and Space Administration (NASA)'s Fermi spacecraft detected gamma rays coming from a nova called V959 Mon, some 6 500 light-years from Earth.

"Nova eruptions are the most common Galactic explosions," says Ribeiro. "This particular explosion was very interesting: because it was the first to produce gamma-ray emissions, there was a lot of interest in understanding its parameters."

Ribeiro was one of the first astronomers to model the V959 Mon nova in order to determine its shape more accurately.

"Radio wavelengths are ideal for measuring the basic parameters of these explosions, such as their mass and how energetic the explosion was," he says. "However, many of the models applied to date have been assuming that the geometry of these explosions was spherical, since this is the easiest approximation."

Ribeiro's models, however, discovered that the eruption had a bipolar shape similar to a dumbbell. This has contributed significantly to a better understanding of the process. 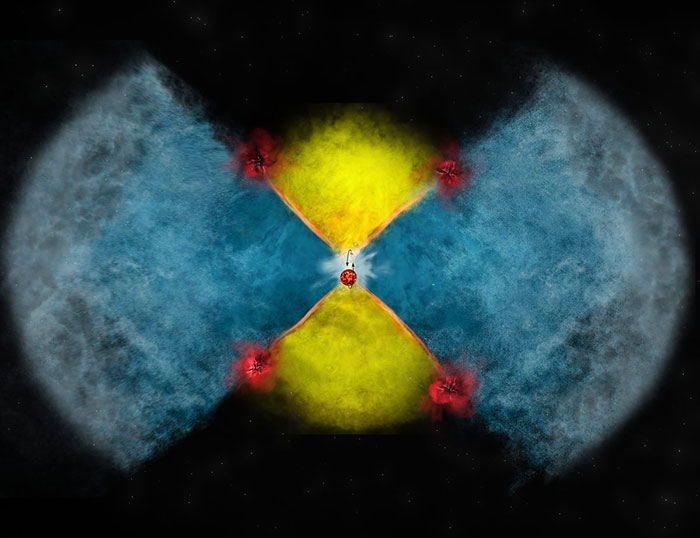 The fast-moving polar flow meets the flow from the equatorial region (see below for detailed explanation).

When the nova first erupts, the force of the explosion causes the white dwarf and the nearby star to lose some of their orbital energy. This propels the ejected matter even faster, out into the plane of their orbit. Later, the white dwarf blows off a faster wind of particles along the poles of the orbital plane. When the faster-moving polar flow hits the slower-moving material at the equatorial region, the shock accelerates particles to the speeds '“ close to the speed of light '“ that produce the gamma rays. 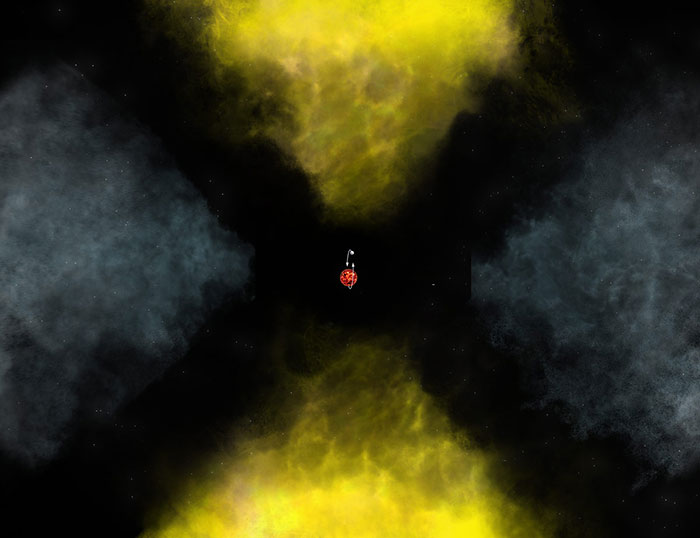 Towards the end of the process, everything detaches from the binary system (see below for detailed explanation).

Since the observation of the V959 Mon nova, Fermi has detected gamma rays from three further nova explosions. "This mechanism may be common to such systems. The reason the gamma rays were first seen in V959 Mon is because it's close," says Chomiuk.

However, when the South Africa MeerKAT radio telescope (the precursor to the SKA telescope) starts observing the sky, the radio models Ribeiro developed as a SKA fellow at UCT will be very useful: "We should start finding a number of these nova explosions," he says, "and this will undoubtedly open up a whole new set of questions to ask, as this Nature paper does."

The advent of the SKA telescope should increase our understanding even further. "Once the SKA comes online," explains Ribeiro, "we will have the sensitivity and resolving power to observe more of these systems directly at further distances, allowing us to start exploring these systems '“ not just as individuals, but as populations." 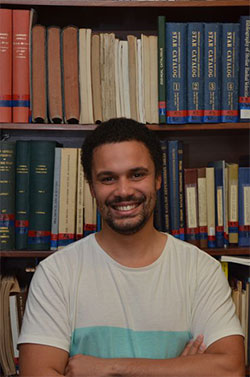 Ribeiro himself, meanwhile, has just taken up a prestigious position as a Radboud Excellence Fellow at Radboud University in the Netherlands, a fellowship awarded to exceptionally talented young researchers. This is just another step on the trajectory for Ribeiro, who is a living example of SKA's intent to nurture African talent and prepare it for future leadership roles in SKA science.

Ribeiro has been involved in capacity development himself, teaching introductory courses in astrophysics at the University Eduardo Mondlane in his home country of Mozambique, a SKA partner country. Ribeiro is still closely linked to the UCT team and hopes to return to Southern Africa in time for the start of the MeerKAT/SKA era: "The SKA fellowship allowed me to be part of a vibrant and rapidly changing environment, as well as to build lasting relationships with the South African astronomy community."

Story by Carolyn Newton, based partly on a press release by the National Radio Astronomy Observatory (a facility of the National Science Foundation, operated under cooperative agreement by Associated Universities, Inc)

Radio-telescope images of the nova explosion.
Left: In the initial explosion, the nova envelope (the nuclear explosion that encompasses the white dwarf and its nearby companion) expands (the light yellow area). This interacts with the binary system, which you can see right in the middle: a star and a little circle, showing the orbit. The effect is that material in the equatorial region (dark yellow, going vertically in the image) becomes much more dense.
Middle: The dense material (now in yellow) starts moving at a slower velocity, as the material coming out of the poles moves at a much faster velocity (now in blue). This is because there is not much interaction at the poles, so the material can flow smoothly. This difference in velocity is what produces the shocks (orange lines), and the red blobs depict the shocks in the radio emission. The reason we don't see these shocks in other regions is because they are embedded within the ejecta, which is opaque (in the same way that you cannot see through a dense cloud).
Right: At this point the wind from the white dwarf ceases, and everything detaches from the binary system as it flows outward and rapidly drops in density. The blue region will drop in density much faster than the yellow region, which will dominate radio images for much longer.