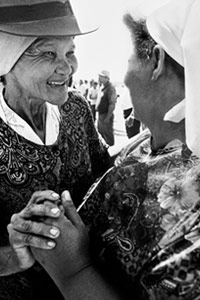 Ties that bind
Sisters reconnect after 20 years of separation as a result of the apartheid removals, in Riemvasmaak in the Northern Cape. This image, taken in 1995 by Paul Weinberg - senior curator of UCT's visual archive, and a lecturer in documentary arts - is on display this September at the London School of Economics and Political Science, as part of an exhibition of 'treasures' belonging to UCT and the universities of Fort Hare and the Witwatersrand, South Africa's Democracy: Mandela's cherished ideal. Exhibits include photographs by David Goldblatt, Jillian Edelstein, George Hallett and Paul Weinberg; documents relating to the political trials of South African freedom fighters; and a papier-mÃ¢chÃ© guitar made by Govan Mbeki, on which he composed pieces and sang to fellow prisoners on Robben Island. 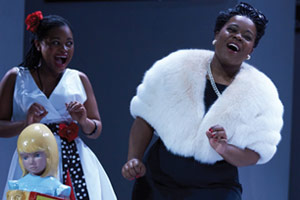 Terminal conditions
Amanda Meke (left) as Delia and Bongiwe Nakani as Melibea in the UCT Opera School/Cape Town Opera collaboration of Rossini's Il Viaggio a Reims (written to celebrate the coronation of King Charles X at Reims in 1825). In this updated production, fourteen fashion-loving B-list celebrities find themselves stranded in a chic airport hotel lobby - and the boredom of waiting in transit drives them to extremes. A story of flirtation, obsession and panic, this Baxter Theatre production was directed by Matthew Wild, conducted by Kamal Khan, and featured scenery and costume designs by Leopold Senekal. Known for creating opera stars for the world's stages, the Opera School is also one of the university's funding priorities, to which alumni and the broader UCT community can contribute directly. 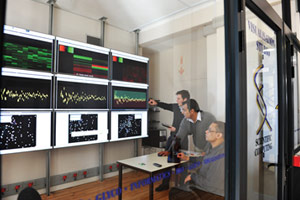 Visualising big data
Dr Christopher Barnett, Dr Jahanshah Ashkani and Professor Kevin Naidoo experimenting with the new video wall in the Scientific Computing Research Unit (SCRU) visualisation studio. An essential facility within the Informatics and Visualisation Lab, the studio provides an environment in which researchers can visually analyse large chemical and genomic data sets or immerse themselves in high-resolution computer models that may not be able to be shown on conventional laboratory video displays. The first such facility of this kind at UCT, the studio will predominantly be used for the research being undertaken at the SCRU, but will also be made available to academic staff in the UCT community in the near future, to perform visual analytics of their data or analyse graphical models too large for conventional video displays. 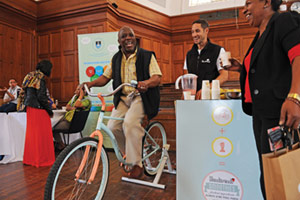 Pedal-powered smoothie
Sello Mohlaphuli from Campus Protection Services gets his legs spinning and his heart pumping on a portable, pedal-powered smoothie-maker at UCT's annual wellness fair. Hosted by the Human Resources Department under the leadership of Professor Thandabantu Nhlapo, the annual fair is in aid of improving staff well-being and lifestyle. Available at no charge over the three-day period were neck- and shoulder-massages, eye-screening, blood-pressure tests, and screening for cholesterol, diabetes, HIV and psychological distress - as well as a range of lucky-draw prizes.