Science on the ground

The interface between community and science is a complex interaction best described as a relationship of reciprocity. From smallholders and artisanal fishers to bundu-bashing citizen scientists, communities are making their mark on science - and both are benefiting.

Upside down and turned around -Ecologist Dr Peter Carrick

Along the 400km coast of Namaqualand, diamond mines have turned the fragile ecosystem upside down. Literally. Designated as one of the world's 35 biodiversity hotspots, this zone is the most species-rich arid environment in the world. Many species are habitat specialists.

It's ironic that jewels other than endemic bulbs and mesembryanthemaceae are also found here - in rich seams just 50 metres or less under ground. Open-cast mining has overturned thousands of hectares in discontinuous patches, leaving holes and dumps of overburden that have all but destroyed locals' livelihoods.

Legislation now requires mining companies to clean up, restoring the landscape during and after mining operations. That's where the Plant Conservation Unit's Dr Peter Carrick comes in, with the Namaqualand Restoration Initiative (NRI), launched in 2005 as part of the Succulent Karoo Ecosystem Programme.

This initiative tapped into Namaqualanders' deep knowledge of the land to equip teams from local communities to rebuild the ecosystem. The NRI did a 'sweep' of local and scientific knowledge from farmers, mine operators, agricultural scientists, and local naturalists and herders (often with few resources but great insight), to synthesise their working knowledge of restoration techniques.

Local teams operated as formal businesses, contracted to mining operators, gaining access to the formal economy and negotiating their terms; and with them, increasingly, their future. The service they offered had been scientifically developed and was a tried-and-tested system involving 'restoration packs', wind-erosion barriers and transplants to restore former mining sites. The NRI was also able to provide assurance to mining operators that the system had been implemented correctly.

An offshoot of NRI, NM Restoration, became a business owned and run by Namaqualanders.

Carrick, who won an NSTF-BHP Billiton award in 2012 for this work, has since established Nurture Restore Innovate, an initiative that provides long-term ecological advice, support and mentoring to projects that affect landscapes on a larger scale.

"This extends the work of the Namaqualand Restoration Initiative, both geographically and by creating systems to implement the restoration at scale."

The new NRI has recently completed the first phase of research with mining operators on the arid edge of the Kalahari in Namibia. This creates comprehensive restoration systems for the land degraded by mining in this area, principally turning massive overburden and waste rock dumps into hills that look and function like those found naturally in that landscape.

This work has been done in partnership with MSc students and researchers from the University of Namibia.

In Namaqualand the new NRI has now broadened its restoration research to the koppies and uplands that have been degraded by centuries of ploughing and constant grazing.

Research is being done into restoration systems for these rangelands that can be rolled out as part of government's Expanded Public Works Programme, or what could be called 'Working for Ecology' or 'Working on Rangelands' programmes, says Carrick.

"This all works to alleviate poverty in the short term by creating pro-poor work opportunities, and in the long term by restoring productivity to dry, degraded rangelands, so that people can earn more productive and sustainable livelihoods from the land."

Citizen scientists in the veld, plains, bush and mountains play a small but invaluable role in the scientific endeavour. These are ordinary people who enjoy documenting the natural world, their collective data guiding researchers like the Animal Demography Unit's (ADU) Postdoctoral Research Fellow Dr Sally Hofmeyr.

Hofmeyr has been studying secretary birds (Sagittarius serpentarius), large, terrestrial birds of prey endemic to Africa and usually found in the open grasslands and savannah of the sub-Saharan region. Using data from her first postdoctoral study in 2012/2013, she published a paper in PLOS ONE (a scientific journal put out by the Public Library of Science), co-authored with the ADU's director, Emeritus Professor Les Underhill, and Wits University's Dr Craig Symes.

It pointed to an alarming trend.

"This interesting and iconic species appears to be declining in the country - most severely, apparently, in the Kruger National Park, usually thought to be a haven for large raptors," says Hofmeyr.

The researchers were able to identify this trend using data citizen scientists had contributed to the Southern African Bird Atlas Project and the Co-ordinated Avifaunal Roadcounts.

"Long-term public participation or citizen science projects make it possible for observations made by many different people to be pooled and analysed as a whole," the authors explain in their introduction. "They provide the best opportunity for assessing population trends in species such as the secretary bird."

The relationship of reciprocity is reflected in the fact that the team chose to publish their paper in PLOS ONE, an open-access journal: "Since the data we used was contributed freely by citizen scientists, and freely available to them as well, it made sense to publish in a way that allows anyone access to the article," says Hofmeyr. 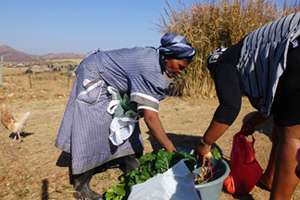 The Seeds and Knowledge Initiative works with farmers, NGOs, researchers and policymakers to revive and enhance traditional seed and knowledge systems, while also deepening scientists' understanding of their functioning in the context of agricultural, cultural and ecological practices.

"We want to build a community of practice around seeds and knowledge in the region," says Wynberg, who is one of the organisation's partners, itself a long-term collaboration with Biowatch South Africa and the Mupo Foundation.

Local agricultural systems have been eroded for decades by policies and laws that promote the interests of commercial farmers and multinational seed and agro-chemical companies. Traditional seed varieties have all but disappeared in many areas, along with the associated knowledge and culture.

"Industrial agriculture produces only 30% of the world's food," notes Wynberg, "but it's a leading contributor to climate change and environmental degradation through destructive farming practices, use of fossil fuels and reliance on chemical inputs."

The long-term vision is to collaborate with communities, and national and regional partners, so that smallholder farmers - women in particular - have more control over seed procurement and food production.

"The first priority of the project is to help communities and farmers revive traditional seed and agricultural knowledge systems," says Wynberg. "Farmer exchanges have fostered horizontal learning and knowledge exchanges between communities, and across the region's borders. Learning exchanges are also taking place between researchers involved in formal seed systems such as gene banks and custodians of farmer-led systems."

Ongoing research, documentation, and experiential learning are vital to shifting the paradigms governing policymaking in science, she says.

"Traditional knowledge and seed and agricultural systems are part of a complex socio-ecological system in farming communities throughout Southern Africa. We want to bridge the gap between community realities and policies, and to support this process with research that has a social impact."

'Community' is a watchword for human geographer Associate Professor Maano Ramutsindela, whose work on peace parks examines the movement of human and animal communities.

Peace parks - such as the Kgalagadi Transfrontier Park, which straddles the border between South Africa and Botswana - link conservation areas and ecological and cultural footprints. They're meant to promote local community development, biodiversity conservation and regional integration.

"They're founded on the philosophy of co-existence among humans and between humans and nature," Ramutsindela explains. "Regionally they're an avenue for integration; for example, Southern African states united by a common vision and managing their shared natural resources together."

Peace parks have increased the habitat for species such as elephants and have brought some areas with critical biodiversity under protection. But they have also metamorphosed, from the initial idea of bringing together a mosaic of land under various forms of tenure into a common conservation entity, to that of a park or wilderness with its consequent separation between humans and nature.

"What was supposed to be a progressive multi-land-use transfrontier conservation area is becoming an exclusive transnational park that allows free movement of wildlife and tourists, while ensuring that the movement of ordinary local residents is restricted," says Ramutsindela.

What's happening to the land - and other resources - that residents living near these conservation areas relied on?

"The answer is 'green grabbing'; the appropriation of land and resources for environmental conservation and the greening of the planet. In the context of peace parks, this process enlarges the conservation areas through colonial-era removals, the creation of wildlife management areas, co-management of land, and outright purchase of land in private hands."

Research, Ramutsindela says, is vital to assess and monitor the environmental and social outcomes of these processes in the parks. The irony, he notes, is that local communities, whose land rights are often precarious, are not involved in the planning of these parks.

"Issues of human rights should be central to the planning and establishment of peace parks."

For the Marine Research Institute's (MA-RE) Professor Astrid Jarre, natural and human social systems are at the heart of a transdisciplinary project on coping with global change in the Benguela Current large marine ecosystem, which extends along South Africa's west coast and south coast, approximately to East London. Researchers are hoping to create knowledge that will help coastal communities tackle many of the problems they're facing.

The South African Research Chair in Marine Ecology and Fisheries, Jarre says that collaboration between researchers from various home disciplines (from the natural and social sciences) and including citizens, is generating transdisciplinary approaches that are distinctive in research progress and outcome.

One such project is a citizen-in-science approach to the colony of endangered African penguins at Stony Point, Betty's Bay.

"As human contact needs to be carefully managed, citizen scientists can't be involved in direct contact-based penguin research," says Jarre. "But drawing on sociological and anthropological techniques, our research has shown that Betty's Bay residents show overwhelming support for a well-managed penguin colony, even though this will increase vehicle and tourist traffic. The planned interpretative centre has huge potential to evolve as a true collaboration among the residents, and with the managing authority."

The Southern Cape Interdisciplinary Fisheries Research (SCIFR) project is another example of research involving citizens: "Fishers, learners and academic researchers are now involved, through SCIFR, on a collaborative process to improve our understanding of long-term change on the Agulhas Bank, south of Cape Agulhas."

Tangible results have resulted from collaborations; one is a seawater sampler, co-designed with local fishers, that is deployed from commercial ski boats: "The incoming data on temperature at the sea surface and at fishing depth are quality-assured by researchers, and further processed by learners in coastal schools in the Hessequa municipality in the Eden District," says Jarre.

"We envisage that communication on climate-related questions, which will involve all three groups, will enhance scientific research, and community understanding of the scientific process â€“ as well as long-term change."