UCT facilities allow you to take a closer look at the world around you – whether you're peering into the depths of space and time, or studying the behaviour of subatomic particles in very cold conditions.

Electron microprobe
With an electron microprobe, you can study the chemical composition of tiny volumes of solids (from boron through to uranium), at the micron scale. [A single hair is 40 to 50 microns wide]. This device effectively shoots electrons at your sample, causing elements contained in it to emit X-rays that the microprobe diffracts through different crystals, and then measures.

At UCT it's often used to analyse kimberlite (a form of igneous rock in which diamonds are found), for elemental mapping (showing the distribution of elements in a sample), or for cathodoluminescence imaging of zircon grains (if you shoot electrons at luminescent materials, it can cause the emission of visible wavelengths). Zircon (seen through an electron microprobe in this image) is not only luminescent, but also incredibly durable, meaning it is contained in some of the oldest rocks on Earth. 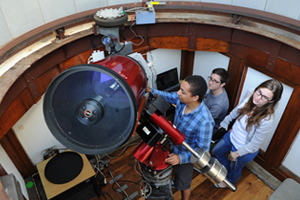 Optical telescope
It's not immediately visible to passers-by, but neither are the things it sees. The Department of Astronomy's new optical telescope is tucked away in the dome of the RW James building. Officially named the Tony Fairall Teaching Observatory in December 2013, the facility comes equipped with a new Celestron 14-inch telescope, as well as a charge-coupled device that captures light more efficiently than photographic plates, and a spectrograph cap (a device that allows you to see and record the lines in a spectrum of light).

The Celestron's large 14-inch aperture gives stargazers a sharp view of the solar system under clear conditions, including all the features on the moon, detail in Jupiter's clouds and belts, and even a faint glimpse of Pluto. Weather permitting, astronomers can also feast their eyes on deep-sky objects such as nebulae and galaxies. The Department of Astronomy is compiling a 2015 calendar featuring images taken through the telescope.

The telescope is already being used to teach astronomical techniques to second-year students and optical photometry to third-year stellar astrophysics students. The observatory runs under the direction of Professor Claude Carignan and Associate Professor Patrick Woudt. 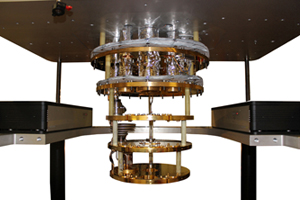 Dilution fridge
UCT's Physics Department will be home to the coldest place on the African continent when the department takes delivery of a dry dilution fridge in early 2015. This state-of-the-art instrument has a base temperature of 7mK, which is seven thousandths of a degree above absolute zero. At -273.15 degrees Celsius, absolute zero represents the lowest temperature possible – nothing can be colder, and an object at absolute zero retains no heat energy.

The cryogenic system uses a mixture of the isotopes helium-4 and helium-3 in combination with high-powered MagLev (magnetic levitation) turbo pumps to achieve its ultra-low temperatures and high cooling power. What kind of research can it be used for? Quantum cryptography (encoding messages using physics, not mathematics), transporting single electrons at a time, and the characterisation of nanocomposites (man-made materials built using nanoparticles), for example.

This facility will provide valuable training opportunities for students at all levels and allow UCT to become a player in a very active and exciting international field, says Professor Mark Blumenthal, the physicist who will oversee the use of the dry fridge. 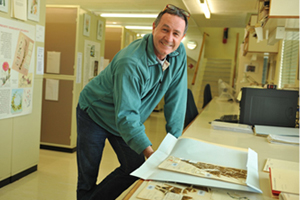 Housed in the Department of Biological Sciences, the herbarium facilitates research in various disciplines, such as taxonomy (scientific classification), systematics (the diversification of living forms), biogeography (the distribution of species across geographic space and time), endemism (specimens unique to a defined geographic region) and pollination biology.

It is also home to more than 14 500 type specimens (specimens used to describe a species for the first time), with representatives of the Cape flora forming the bulk – making it the most type-rich herbarium in South Africa. Each of the hundreds of thousands of specimens is kept safe in steel cabinets. 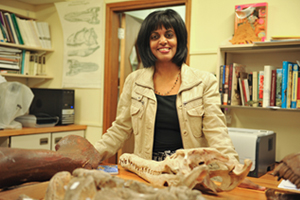 Prof Anusuya Chinsamy-Turan inside the Palaeobiology Laboratory. Photo by Je'nine May.

Bones reflect a variety of events that affected an individual's life, including phylogeny (a species' historical evolution) and ontogeny (an individual's development from embryo to adult). By studying the microscopic structure of fossilised bones, scientists can gain insights into the biology of extinct animals.

But it's not just long-dead species that the lab studies. Reptiles, turtles, and a range of bird species are studied to provide a deeper understanding of factors that influence bone growth. These enrich the lab's core aim of shedding light on the lives and make-up of extinct animals, from flightless dinosaurs, to therapsids (mammals and mammal-like reptiles), parareptiles (a contested sub-class of ancient reptiles), and extinct elephants. 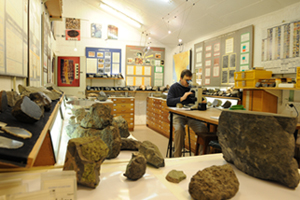 Mantle Room
Thought to be the largest collection of its kind, the Mantle Room in the Department of Geological Sciences houses a collection of over 10 000 upper mantle-derived materials (mantle xenoliths and xenocrysts, kimberlites and related rocks, megacrysts, and deep-crustal xenoliths). These are used for research purposes, and have been collected mainly from South African diamond mines, including Jagersfontein, Finsch, Jwaneng and Kimberley.

A one-of-a-kind collection in terms of both the variety of specimens and range in locality, the Mantle Room includes samples from Russia to Brazil, assembled over the past 50 years, and is available to researchers from around the world.