The Earth sings every day, with an electric chorus. With the right tuning, radios can eavesdrop on this sizzling symphony of crackles, pops and whistles '“ the melody of millions of lightning bolts. A listener in New Zealand can hear a volcano erupt from as far away as Alaska, a new study reports.

This awe-inspiring picture is of volcanic lightning as the Shinmoedake volcano erupts. The reasons behind the phenomenon is not well understood but scientists believe it occurs when positively charged particles emitted from the volcano clash with cool particles - which in turn creates the lighting.

Lightning strikes unleash intense bursts of visible light and very-low-frequency (VLF) radio waves, among other kinds of energy. With a VLF receiver, anyone can listen to the constant chatter of Earth's lightning, estimated at eight million strikes every day.

A worldwide listening network is tuned to one particular lightning sound, called whistlers. These eerie electronic signals supposedly got their name from soldiers, who compared the sound to falling grenades. Modern ears might liken whistlers to a video game's "pew-pew-pew" soundtrack.

Whistlers are pulses of VLF radio energy that have travelled into space, leaping from one side of Earth to the other along the planet's magnetic field lines. Scientists monitor whistlers because the beautiful noise tells them about the planet's protective bubble of charged particles, called the plasmasphere. Whistlers on Venus and Jupiter suggest lightning also crackles on other planets.

Now, however, researchers have linked a flurry of whistlers detected in Dunedin, New Zealand, to processes deep inside the Earth. For the first time a connection has been made between whistlers and volcanic lightning, said Claire Antel, a postgraduate student in physics at the University of Cape Town and lead author of the study published on 2 July in the journal Geophysical Research Letters.

"I think it's really cool," said Jacob Bortnik, a researcher at the University of California, Los Angeles (who was not involved in the study). "We're establishing a new connection between deep Earth and space."

On a busy day for space music, whistlers may zap Dunedin, on New Zealand's South Island, around 1 000 times.

The majority of Dunedin's whistlers appear to originate in thunderstorms off the shores of Central and North America, according to earlier studies by Andrew Collier, a physicist and scientist at Exegetic Analytics in Durban, South Africa, and co-author on the new study. The energy pulse zooms outward, and then arcs back down on the far side of the planet, travelling thousands of kilometres in a matter of seconds. As it travels, the energy disperses, with high frequencies arriving faster than low frequencies. This spreads out the pulse so it arrives sounding like a whistle, with a descending tone.

But Dunedin's magnetic conjugate point '” the spot where the magnetic field line arcing out of New Zealand bends back down into Earth '” is located in Alaska's Aleutian Islands, Antel said. This makes Dunedin whistlers rather anomalous.

On 12 July 2008, Collier and his colleagues detected an astounding peak in Dunedin's whistler activity, which they linked to thunderstorms in America. The network picked up more than 15 000 whistlers that day, and the researchers found even more when they pored over the records.

When Collier sent Antel searching through records of lightning strikes and volcanic eruptions in order to resolve the Dunedin case, she found the real cause of the 12 July peak. The source was located in the Aleutian Islands.

Alaska's Mount Okmok erupted on 12 July 2008. Within 35 minutes, the whistler count at Dunedin started rising, Antel and her co-authors reported. The network recorded more than 21 000 whistlers within 10 hours of the eruption. After Okmok's ash plume collapsed, cutting off the lightning, the whistlers quieted.

It was clear that there is a strong connection between Dunedin and its conjugate point, allowing the channelling of VLF signals. 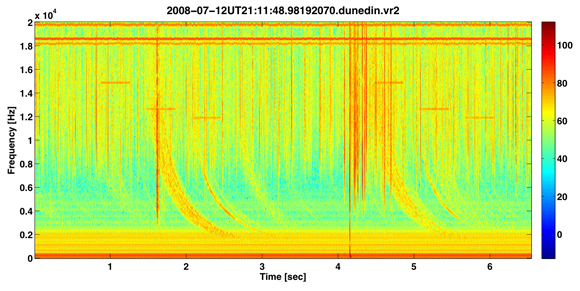 A whistler spectrogram recorded during the Mount Okmok eruption.

Another whistler spike hit Dunedin starting on 23 March 2009, when Mount Redoubt erupted several times before quieting on 4 April. But not every volcanic blast in Alaska blew the whistle in Dunedin, Antel discovered. There were just a few whistlers from an eruption at Kasatochi Island on 7 August 2008.

The differences could be due to eruption size, Antel said. Volcanic lightning isn't as well understood as lightning produced in storms, but small volcanic eruptions are less likely to generate the electric charges that lead to lightning. The biggest volcanic blasts bear enormous bolts in their towering clouds, similar to the massive thunderclouds that menace the US Midwest in summer.

Antel thinks there's potential for probing volcanic lightning with whistlers, and perhaps even monitoring Earth and other planets for new eruptions. "Okmok and Redoubt might be very special, or maybe volcanoes are very good at generating whistlers," she said. "Maybe we can use whistlers to provide evidence of volcanoes on other planets. It's still unclear how far we can take this."

However, the worldwide lightning-tracking network already picks up volcanic lightning, so it's unlikely that listening to whistlers would boost eruption monitoring, said Robert Holzworth, a professor of earth and space sciences at the University of Washington in Seattle, who was not involved in the study.

"Right now, it's in the 'interesting phenomenon' category," Holzworth said. "The most important implication of studying whistlers is monitoring space weather and gaining good, up-to-the-minute knowledge of what's going on in space."

This is a modified version of a story by Becky Oskin; the original article appeared on Live Science and Yahoo! News. Lead photo by Tsuyoshi Nishiinoue/Amana images/Sipa. Spectrogram by JÃ¡nos Lichtenberger.