Research by a University of Cape Town PhD graduate explores how Information and Communication Technologies (ICTs) - specifically the use of mobile phones - help the mobile population of Cape Town's Langa township negotiate migration and a sense of belonging.

In her thesis, ICTs and the reconfiguration of "marginality" in Langa Township: A study of migration and belonging, Dr Crystal Powell seeks to reveal the complex reality of marginalisation experienced among Langa's mobile population.

Dr Powell's findings showed that mobile phones, for many of the local and immigrant residents in her study, had become a way to challenge their (real or imagined) marginalities within South Africa and the township. "As symbols of status, mobile phones were useful as facilitators of the reconfiguration and renegotiation of marginality for many residents," she said.

Generally in South Africa there is a lack of empirical evidence that can show that South Africans are using mobile technologies in their everyday lives in creative and innovative ways. 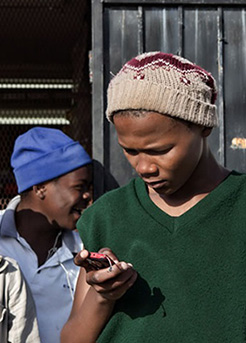 Generally in South Africa there is a lack of empirical evidence that can show that South Africans are using mobile technologies in their everyday lives in creative and innovative ways.

Dr Powell said: "Those living in poverty have mastered the use of technology in spite of a lack of finances to sustain airtime to, for example, gain social inclusion and acceptance in a variety of social aspects both within and outside the township, and within and outside South Africa." Yet, inventors of mobile phones often do not consider the use of devices by marginalised people to benefit their lives, Dr Powell added. The study is therefore useful to the ongoing debate regarding the use and role of technology on the African continent.

Dr Powell's thesis is part of a larger project which investigates the ways in which new ICTs '“ such as the use of mobile phones '“ have shaped the ongoing transformation of South African society.

She focused specifically on the ways that mobile phones either mitigated or worsened xenophobic tensions between local South Africans and African immigrants who have settled among them '“ particularly in disadvantaged populations like those living in townships. She looked at how mobile phones allowed African immigrants to create and maintain flexible identities, safely allowing them to occupy a social standing both at home and in their 'host' country, which is South Africa.

Dr Powell holds a BA in Cultural Anthropology from the Lehman College University, New York, and an MA in Department of Social Anthropology from UCT. Her book, Me and My Cell Phone, and Other Essays on Technology in Everyday Life, was published in 2012.