Africa is urbanising rapidly. The ongoing human migration - of people pulling up roots in rural areas and resettling in cities - that happened in the Global North over a period of 200 years, is happening in the Global South (including Africa) in less than half the time. This rapid change is not only placing extraordinary strain on society and its structures, argues Professor Edgar Pieterse, director of the African Centre for Cities. It also demands an entirely new approach to how we think of - and design - our cities.

Just two metrics are needed when planning future African cities: that the designs ensure that everybody has access to basic services, and that the environments are resource-efficient.

So argued Professor Edgar Pieterse, director of the Africa Centre for Cities at UCT, at a public lecture arranged by the Gordon Institute for Performance and Creative Arts in April.

The talk, titled African Urban Revolution: Epistemic Adventures, wove together threads from Pieterse's two key lines of enquiry in recent years. The first explores the empirical dimensions of Africa's urban transition and its implications for a range of aspects of urban life, while the second is where Pieterse lets go of the shackles and reimagines the idea of African urban living, hoping to find a smorgasbord of fresh thinking to spawn alternative ways of life that benefit all urban dwellers.

Laying the foundation for his argument, Pieterse explicated the unique nature of Africa's urban transition. The Global North's urban transition - when its population moved from 10% in urban areas to 50% - took 200 years (1750 to 1950) to unfold, says Pieterse. In contrast, Africa's took half that time, with 18% of the population living in urban areas in 1913, and 56% in 2013.

This has serious implications with regard to well-being, as societies struggle to maintain lifestyles.

"The mind boggles, and it's impossible to wrap one's head around what that might mean in terms of the speed at which you build cities and the speed at which you need to provide services. What this means for governance, how citizenship is instituted, and the overlay of that - the tumult of the post-colonial era in the last fifty years - and what that has meant for the economic insertion of these countries into the global economy," says Pieterse.

That process must contend with a number of global challenges, notably climate change, while still seeing to people's basic needs. The regulatory framework governing this is "essentially stuck in an industrial-era paradigm", says Pieterse.

The forecasts are of a far bigger urban population, which will bring challenges. Although it is important to note that rural areas are also growing, cautioned Pieterse.

Pieterse put the strain on the current system in perspective.

"It's important to understand the tension that will emerge between the global middle classes and ... global slum populations. We're anticipating the slum population to treble.

"The aspirations and consumption desires of the middle classes and the slum dwellers is at the heart of how the urban [space] is constructed, and how politics will be mediated.

"Only 3% of African urban dwellers are eligible for a mortgage," he observes. Moreover, only 28% have "stable" jobs (which includes the lowest-paid employees), and 63% are in "vulnerable" jobs and liable to lose their source of income at any time.

This leaves urban planners in the precarious position of building infrastructure that is sorely needed, but that the society might not be able to maintain.

"What this essentially means is that you cannot build infrastructure that assumes that people are able to pay rates and services," says Pieterse. Simply put, the African urban environment is teetering towards a crisis and the solution would entail a paradigm shift to a society that is able to sustain itself, and an urban environment in which people's needs inform engineering plans, not the other way round.

Listen to the audio file of Prof Edgar Pieterse's lecture 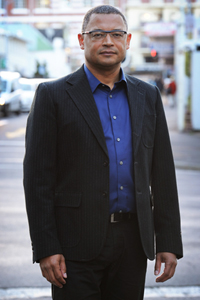 Pieterse was awarded the South African Research Chair in Urban Policy in 2007, and leads a team of experts developing an Urban Development Framework for South Africa.