Farewell to a great son, and a father to the nation 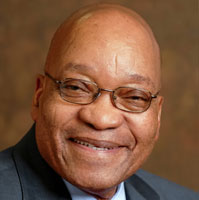 "This is the moment of our deepest sorrow. Our nation has lost its greatest son." – President Jacob Zuma.

South Africa had lost its greatest son and its people had lost a father, President Jacob Zuma said in the wake of former president Nelson Mandela's death last night, 5 December.

In an address to the nation, Zuma, South Africa's fourth president post-1994, paid tribute to the man who took the mantle as the country's first president in an era of democracy.

"My fellow South Africans, our beloved Nelson Rolihlahla Mandela, the founding president of our democratic nation has departed.

"He is now resting. He is now at peace.

"Our nation has lost its greatest son. Our people have lost a father.

"Although we knew that this day would come, nothing can diminish our sense of a profound and enduring loss.

"His tireless struggle for freedom earned him the respect of the world.

"His humility, his compassion, and his humanity earned him their love. Our thoughts and prayers are with the Mandela family. To them we owe a debt of gratitude.

"They have sacrificed much and endured much so that our people could be free.

"Our thoughts are with his friends, comrades and colleagues who fought alongside Madiba over the course of a lifetime of struggle.

"Our thoughts are with the South African people who today mourn the loss of the one person who, more than any other, came to embody their sense of a common nationhood.

"Our thoughts are with the millions of people across the world who embraced Madiba as their own, and who saw his cause as their cause.

"This is the moment of our deepest sorrow. Our nation has lost its greatest son.

"Yet, what made Nelson Mandela great was precisely what made him human. We saw in him what we seek in ourselves. And in him we saw so much of ourselves.

"Fellow South Africans, Nelson Mandela brought us together, and it is together that we will bid him farewell. Our beloved Madiba will be accorded a State Funeral.

"I have ordered that all flags of the Republic of South Africa be lowered to half-mast from tomorrow, 6 December, and to remain at half-mast until after the funeral.

"As we gather to pay our last respects, let us conduct ourselves with the dignity and respect that Madiba personified. Let us be mindful of his wishes and the wishes of his family.

"Let us reaffirm his vision of a society in which none is exploited, oppressed or dispossessed by another. Let us commit ourselves to strive together - sparing neither strength nor courage - to build a united, non-racial, non-sexist, democratic and prosperous South Africa.

"Let us express, each in our own way, the deep gratitude we feel for a life spent in service of the people of this country and in the cause of humanity.

"A determination to live as Madiba has lived, to strive as Madiba has strived and to not rest until we have realised his vision of a truly united South Africa, a peaceful and prosperous Africa, and a better world.

"We will always love you Madiba! May your soul rest in peace. God Bless Africa. Nkosi Sikelel' iAfrika."