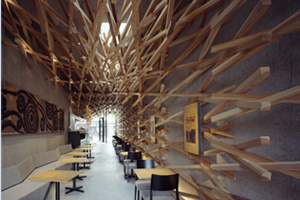 Startling: Japanese architect Kengo Kuma's design for Starbucks in the Japanese city of Dazaifu. Kuma delivered a lecture on Japanese traditional architecture in the 21st century at UCT last week.

The massive earthquake and resultant tsunami and nuclear meltdown that hit Japan on 11 March 2011 had precipitated a new relationship between nature and humanity in that country, said Japanese architect Kengo Kuma.

A professor at the Graduate School of Architecture at the University of Tokyo, Kuma was delivering a lecture, After 3.11 - Reinterpreting traditional Japanese architecture for a 21st century world, at UCT last week.

Kuma is dedicated to recovering the tradition of Japanese buildings and reinterpreting these traditions for the 21st century.

The new relationship he alluded to centres on the use of vernacular materials like stone, rice paper, cedar wood, bamboo and adobe blocks - the latter built using the skills of local craftsmen - and even natural shapes like hexagons.

"Respect for nature is part of our culture," said Kuma. "Architecture is not an isolated element but a frame of landscape, part of nature."

Using his design for the Nakagawa-machi Bato Hiroshige Museum of Art (2000) to illustrate his point, Kuma added that architecture should be "hidden in a beautiful landscape".

The museum's entrance faces the mountain and not the car park and Kuma incorporated indigenous materials like cedar wood hewn from the local mountain for the roof, and opaque rice paper, 'to allow integration of inside and outside', his design reinforcing the relationship with the mountain and the shrine built there.

"The life of the village is centred on the mountain," he added.

To counter the effects of phenomena like earthquakes, traditional materials are strengthened by modern technology, such as adobe blocks reinforced with steel plates and incorporated into his Adobe Museum (2002), in Yamaguchi, where the tradition of building with adobe blocks is unique to the village.

Similarly, to be able to use bamboo, which cracks and discolours, Kuma's solution was to fill the bamboo shafts with concrete and use steel clamps to create a curtain of bamboo, a blend of craftsmanship and technology.

Characteristic of his design is the use of the 'void' to create space, or sense of place, making important links between inside and outside.

"In the Hiroshige Museum of Art design, the void connects the city with the mountain behind the museum building."

UCT's Professor Iain Low said: "Given the history of colonialism and its spatial legacy, it is highly appropriate that we engage with Japan in terms of cultural questions around space.

"Not only have the Japanese managed to continuously transcend tradition and modernity, but they have sustained their unique rootedness to origins in transformed ways - in a manner in which the project of architecture has been essential."

(The lecture was presented by UCT's School of Architecture, Planning and Geomatics, the Embassy of Japan and the Centre for Japanese Studies, GIBS and the Cape Institute for Architecture.)