Nobel a smashing cause for celebration 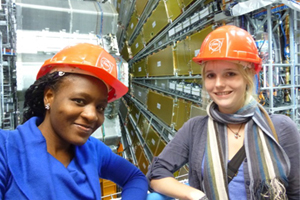 The news that this year's Nobel Prize for Physics had gone to Peter Higgs, the scientist who first predicted the existence of the Higgs boson particle 50 years ago, struck a chord with physicists like Dr Andrew Hamilton.

On 4 July last year the ATLAS and CMS experiments presented their results in the search for the elusive Higgs boson; it had finally been glimpsed at CERN (European Organisation for Nuclear Research) in Geneva, at the Large Hadron Collider.

ATLAS and CMS are Large Hadron Collider experiments that explore the physics of the Terascale; the energy region physicists believe will yield answers to the burning questions at the core of particle physics.

The discovery 'cemented' the work of Higgs and Francois Englert*, the Belgian scientist who shares this year's Nobel Prize for Physics.

In 1964 Higgs and Englert published separate papers to solve a critical puzzle of the Standard Model. This describes all matter and forces (except gravity) at the most fundamental level. And the Higgs boson explains how these most basic building blocks of the Universe acquire mass.

"From 1964 various pieces of the Standard Model were confirmed, but the missing piece, the Higgs boson, was the last to be confirmed," said Hamilton.

Only then could the Nobel Prize be conferred.

ATLAS is an experiment that Hamilton knows well. He spent five years in Geneva before joining UCT in 2011. Last year, the Higgs boson year, he was awarded the National Research Foundation's prestigious P-rating for young scientists.

News of the Nobel honour sent a ripple through UCT's physics department. It wasn't that UCT has produced five Nobel prize-winners, but because the university has close research associations with CERN and the ATLAS experiment which discovered the Higgs.

As soon as the news broke, head of physics, Associate Professor Andy Buffler, asked Hamilton to whip up a short summary of the achievement for the physics majors.

The department, says Buffler, has always enjoyed its associations at the forefront of 'big science'.

In the 21st century, big science is concerned with big questions: the fundemental building blocks of matter, the origins of the Universe, the mysteries of composition of dark energy and dark matter, and the extra dimensions of space.

Hamilton has three MSc students currently visiting CERN. Claire Antel is searching for the Higgs in association with the top quark; Chilufya Mwewa is working on the statistical interpretation of ATLAS data in search of the Higgs decaying to invisible particles; and Ferdinand Schenk is working on exclusive production mechanisms that could provide a tool for future Higgs studies.

UCT became an ATLAS member in February this year, one of 177 member institutions from 38 countries. It's the largest particle detector ever constructed and the experiment is located underground in Geneva, Switzerland.

(*Englert and his colleague Robert Brout proposed a similar theory around the same time as Higgs. Brout died in 2011 and under Nobel rules can't be honoured.)