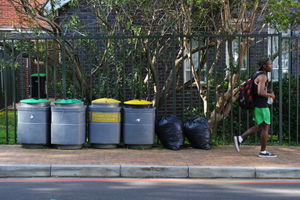 The (re)cycle of life: colour-coded bins have become a familiar sight on campus.

The current model of digging up key elements, using some and discarding the waste, is setting the earth on a rapid course towards running out of many of these vital natural resources, says expert green chemist Professor James Clark. Clark's recent talk at UCT, titled From Waste to Wealth - Using Green Chemistry, explored ways to optimise the earth's natural resources in the chemical industry.

Take the 'new OPEC' (Orange Peel Exploitation Company), for example. Clark and his team are attempting to convert some of the 8,069,705 tonnes per year of waste orange peels available in Brazil into bio-fuels (think sugars and liquid fuels), bio-chemicals (natural fragrance chemicals and acid catalysts) and bio-materials (used for catalysis, separations and water purification).

This would be rather better than allowing 50% of the fruit to go to waste, which is what typically occurs. Green chemistry concepts need to be introduced across supply chains, said Clark. Another example of this focus on a circular life cycle for natural resources is the use of other food wastes taken from landfills to create switchable adhesives for carpet tiles, and basing future construction materials on 100% green and sustainable components.

'Greening' the chemical industry is not the sole domain of 'developed' nations, Clark noted. He recalled meeting representatives of Brazil's chemical industry - now the fourth-largest in the world - a 'couple of years ago', with South Africa's partner in BRICS enthusiastically exploring ways to grow within a more environmentally sustainable framework.

Clark's tour, said organiser Dr Anwar Jardine, was "quite an educational experience" for the UCT senior lecturer too, as he is "not a green chemist, but trying to be".

Green chemistry has gained a lot of momentum in recent years, says Jardine. "This field is something that everybody should think about; [we should] develop greener ways of doing things." Companies such as Proctor & Gamble and Unilever are all consulting green chemists now to come up with greener strategies, Jardine noted.

Clark was speaking at the last of a series of public lectures in October, having been invited by UCT's Department of Chemistry in association with the British Council as part of the Africa Knowledge Transfer Project. He holds the Chair of Industrial & Applied Chemistry at the University of York and heads the Clean Technology Centre, while directing the Green Chemistry Centre of Excellence and heading the Green Chemistry Group at York University.