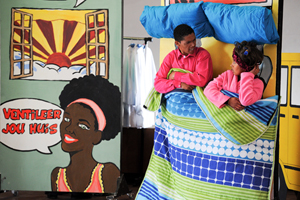 Steal the show: Performers from Worcester Senior Secondary School use drama to convey essential messages about TB and the upcoming trials.

Snow on the Hex River Mountains has turned the wind thin and cold, and there are few people on the streets of Worcester. There's the sense of a town in hibernation, chip packets and plastic bottles wheeling in gutters. But the doors of the Klein Teater are open, lights burning. And backstage, a cast of teens from Worcester Senior Secondary School is preparing for a special show, Karina se Keuse (Carina's Choice).

The Klein Teater is an unlikely place to learn about TB. But drama is playing a central role in educating the Worcester community ahead of a new TB vaccine trial targeting adolescents in this Boland town, where the incidence of TB is among the highest in the world. (See sidebar.)

In the third quarter of 2013 the play was staged 12 times at seven high schools in the Worcester region, creating awareness among 7 500 adolescents about TB (and HIV) - alerting them to symptoms, dispelling myths, and illustrating the importance of drug trials.

"These performances were thoroughly enjoyed by the large audiences, who recognised and connected with popular music - and local slang used," said physician and lead researcher on the drama project, Dr Michele Tameris.

The new trial will be launched in January 2014 by UCT's flagship South African Tuberculosis Vaccine Initiative (SATVI). SATVI is Africa's largest dedicated TB vaccine research group, and is based in UCT's Institute of Infectiuos Disease and Molecular Medicine. It will be based at SATVI's field site at the Brewelskloof Hospital and will rely heavily on buy-in from this tightly knit community.

A visiting UCT contingent, including Vice-Chancellor Dr Max Price and the Faculty of Health Sciences' new dean, Professor Wim de Villiers, joined the audience in the Klein Teater to share the experience with SATVI personnel - and witness how the region's teens are being sensitised to the new vaccine trial.

But Karina is no stranger to this community.

Karina se Keuse is an adaptation of a comic by the same name, developed of the then-SATVI- based Linda Rhoda in 2010 under the watchful eye of the Worcester Community Advisory Board and funded by a grant from the WHO Global Partnership to Stop TB. Its storyline closely reflects the community experience: a young mother chooses to enrol her baby in a SATVI TB vaccine trial, but encounters resistance from family and friends, based on hearsay.

Last year Tameris secured a Wellcome Trust International Engagement Grant to bring the play to life and to evaluate knowledge gleaned by the teens about TB, via surveys conducted by UCT social scientist Amber Abrams.

Drama has proved to be a highly efficient communication vehicle for vital health messages, says the UCT drama school's Dr Veronica Baxter, whose work in HIV/AIDS education in communities spans many years and who has delivered many successful grassroots interventions. Baxter and her senior students assisted Worcester Senior Secondary School's drama teacher Natasha Africa to mould and professionalise the production.

On many levels, SATVI's relationship with the Worcester community has been carefully built and maintained. "We've conducted several TB studies among adolescents in the Worcester region over the last decade and we work closely with community leaders, teachers, and the departments of education and health to engage with high school learners and their parents," said Associate Professor Mark Hatherill, SATVI deputy director (clinical trials and epidemiology).

"Community involvement is critical to the success of these studies. Already, more than 20 000 people have participated in studies at the Worcester field site."

The intersection between humanities and health sciences is soon to be formalised at UCT, when the medical humanities master's degree is launched next year.

Based in the Department of Social Anthropology, the degree will be co-hosted by Dr Susan Levine (social anthropology) and Professor Steve Reid (primary healthcare).