EDU is where dreams are made true 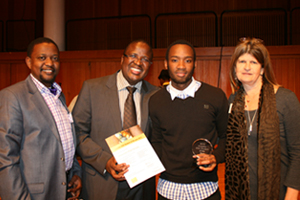 On the 29 August the Education Development Unit (EDU) in the Faculty of Commerce hosted its much anticipated annual Saville Foundation awards ceremony in the Baxter Concert Theatre. The Saville Foundation, which was established by Duncan Saville - a UCT commerce faculty alumnus - has a long-standing partnership with the EDU. It sponsors the award ceremony, as well as, the monetary prizes awarded for academic achievement.

In their speeches Professor Don Ross, Dean of the Faculty of Commerce and Professor Ian Scott, director of the Academic Development Programme in CHED, lauded the remarkable achievements of the EDU programme and its students. Professor Ross highlighted the opportunities the programme provided for students to engage fully in a learning community and acquire the values and skills needed by future leaders. Professor Scott pointed out that the pioneering work done in the Commerce EDU was being used as a model for academic development work nationally.

The theatre was packed with an appreciative audience of students, EDU and commerce staff, donors and corporate partners who were treated to a vibrant feast of entertainment by rappers, dancers and singers. As Gary Shearer from the Saville Foundation remarked: "For us the EDU Awards evening is becoming a must attend - especially with the ever increasing calibre of the '˜show' and the actors in it. The Saville Foundation has always been delighted with the programme and its effect within UCT - a very exciting endorsement of your work and efforts".

In addition to awards for academic excellence, there are two awards which recognise students' dedication and contributions to EDU, its students and the wider community. This year the Investec Student of the Year award was won by Nhlakanipho Bright Khumalo and the newly created Auditors General EDU "Pay it forward award" was given to Ahmed Saheb and Kim Christians.